Cameron: either change policy or we will change government 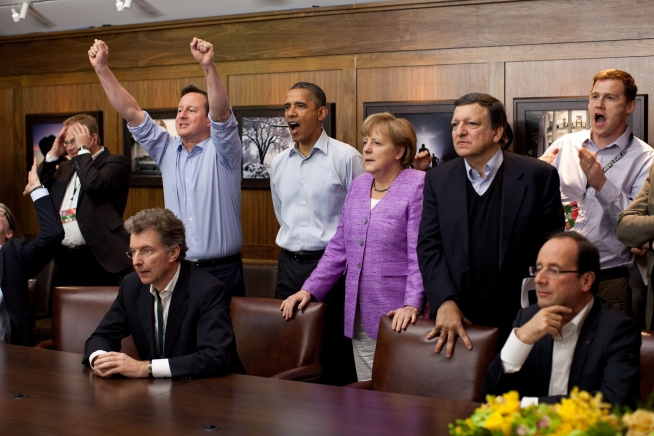 David Cameron cut a happy figure in Washington, as he watched, alongside the disgruntled Angela Merkel, Chelsea beat Bayern Munich on penalties, in football’s 2012 Champions’ League Final. While Cameron was of course cheerful at seeing an English side beat the Germans on penalties, he was no doubt more relieved to see that miracles do happen, and is surely now praying that one can happen to save his lacklustre leadership of the U.K..

David Cameron’s government can be described only as in mayhem: he has Liberal Democrats like Vince Cable telling the media the exact opposite of whatever George Osborne has just told them, yet he is powerless of sack the influential Liberal Democrat who is a lynchpin holding the coalition together. While Osborne says people need to work harder, Cable says telling people they must work harder is dangerous.

There are contradictions all the way through this government; indeed, the coalition is very definitely cracking. Cameron has little to look forward to over the remainder of his term, as Liberal Democrats who have taken a pelting at the polls will continue to become increasingly vocal in their opposition to the Conservative government, and Cameron appears in a weak position, unable to silence them.

His position is not helped by the fact that he and some of his top cronies have been embroiled in the Leveson enquiry, which has dragged on and on and on. Given that Cameron was elected following the expenses scandal, you would expect him to have ensured that his Conservative party was squeaky clean, and ensure that they would not be embroiled in any further scandal. Yet, through both his own misjudgement, such as the appointment of Andy Coulson, and bad luck, through Jeremy Hunt and his close association with the Murdochs during their BSkyB bid, Cameron’s government has been left stuck in the mud of accusations of corruption. Perhaps more antagonizing is the way the likes of Vince Cable and, less subtly, Tom Watson have used the corruption scandal to attack the Conservative Party and David Cameron personally.

It is not just members of other parties that are criticizing Cameron’s leadership, however; even Conservatives have lost faith in Cameron, with outspoken back-benchers such as Nadine Dorris becoming increasingly critical of the “arrogant posh boys who show no remorse, no contrition and no passion“. While the views of one outspoken back-bencher seeking the limelight – and succeeding, with a run out on Have I Got News For You – might not be important to Cameron, what she symbolizes is. She symbolizes the disenchanted Conservatives, who feel that Cameron will not lead them to election victory; she symbolizes those Conservative MPs who fear that they will lose their jobs if the coalition government continues in its current vein; and, perhaps more importantly, she symbolizes the 12% of voters who have turned against the Conservatives since their high point in the post-election era of 43% approval, according to YouGov polls.

Cameron’s problems have been compounded by a faltering economy and a cabinet that seems to have run out of ideas for solving the problem. We have now heard George Osborne and Eric Pickles both tell us that the solution to Britain’s economic woes is that people need to work harder, which is surely a sign of a government that has exhausted all plausible polices, and is scraping the bottom of the barrel in terms of policy ideas. In fact, one would be forgiven for thinking that the Conservative government had given up on attempting to bring growth to the UK economy, preferring instead to run a policy of finding excuses for their failings. In recent weeks, the Conservatives have blamed the Eurozone for British economic woes, and they have even suggested that this quarter’s figures will be low because of the extra Jubilee bank holiday. This change of policy, from solutions to excuses, perhaps shows the extent to which the current government has lost its way in attempting to enforce policy.

What must really sound the warning alarms inside number 10, however, is the polling figures against what is a less than impressive Labour party. The Conservatives are currently trailing Labour by 12% in the polls and have just taken a hammering in local elections, and all this despite the fact that, in Ed Miliband, Labour have an uninspired, uncharismatic leader, who, despite almost two years in the job, has failed to offer any concrete policies. He is far worse than the likes of Blair – who, in his heyday, was hugely popular across the country; yet even he is flying high, thanks to what can only be described as the ineptitude of the Conservative – Liberal coalition in providing any political solutions that can actually help people in Britain.

While David Cameron can bemoan the economic legacy left to him by the Labour government for as long as he likes, the sooner he realizes that this is not the route to election victory, the better. With the tide strongly against the coalition, however, maybe he is hoping for a miracle greater than Chelsea’s penalty shoot-out; but, more likely, he needs to turn his government around and inspire belief among the general public – or else he is destined never to lead a Conservative majority in government.