But It Is Not So with Me: Has the Church Failed Us? 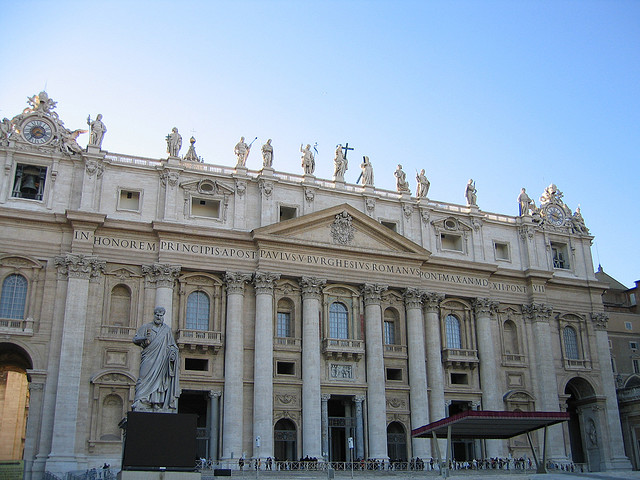 St. Peter’s Basilica, Vatican: the ultimate symbol of the Roman Catholic Church and an international symbol of Christianity.

“This House Believes The Church Has Failed Christianity”

This week’s debate will provide some very pertinent and searching questions into the work of the world’s Churches and Christianity in its entirety. It questions the real aim of Christianity as a whole and whether the different institutions have been able to live up to this purpose.

When I first read this week’s motion, my first question was: “which Church has failed?” and I think the fact that I had to ask this question underlines a very important issue of this debate. The very fact that the Churches have divided to the extent that they have is one way in which they have failed the message of Christianity. Jesus preached to both rich and poor, taxman and Pharisee, and repeatedly stressed the inclusiveness of his message to all. His Beatitudes in Luke and Matthew serve to emphasise this: blessed are the poor, those who mourn, the hungry, the meek, the merciful, the pure of heart and the peacemakers. He died for the whole world, as St. John the Baptist proclaims in John 1:29, “Here is the Lamb of God who takes away the sin of the world!.” But the Churches have separated, each convinced of their own superiority and knowledge of the absolute truth. This has certainly not fulfilled the promise of Christianity but has only served to segregate Christian from Christian. For example, if we take two of the largest denominations of Christianity in the United Kingdom – Church of England and Roman Catholicism – although both believe in the many of the same fundamental principles, neither can take Communion at the other’s Church. This segregation goes so far that were Prince Harry to marry a Catholic, he would have to abdicate.

The decline in Church attendance is another major issue in this debate. If one of Christianity’s aims is to “make disciples of all nations”, as it is commanded in Matthew 28:19, then arguably the Churches are failing despite their missionaries and evangelical preaching. It is true that there has been a growth of Christian communities in places like China. According to China Aid, the number of Christians in China has increased 100-fold since 1949, and current estimates range from 80 million to 130 million active members. However, in Western countries, there has been a definite swing away from Christianity over the past fifty years. In a survey of the U.K. by the National Centre for Social Research in 2009, a little over 50 per cent of respondents now call themselves Christian, down from 66 per cent in 1983. Therefore, if we consider the overall segregation of the denominations and decline of the Church attendance, it is evident that the Churches are failing in their duty to Christianity. Not only is the separation of the denominations against the inclusive message promoted in the Gospels, but the decline of the number of Christians in Western countries shows a failure in the Churches as a whole to promote the evangelism of their faith.

The proposition will be led by Ruth Gledhill, a long-standing religion correspondent for the Times. She will be accompanied by Viscount Monkton of Brenchley OStJ, deputy leader of UKIP and an Officer of the Order of St John of Jerusalem. Together, these two will provide a very strong and perceptive front to the proposition.

In order to discuss whether or not the Church has failed Christianity, we first need to decide on a definition of the Church and what it encompasses. For the purposes of this debate I am going to focus on the Roman Catholic Church as opposed to other Christian denominations such as the Protestant, Anglican, and Eastern Orthodox Church to name only a few, as this is where scandals which have called the Church into question have occurred.

When considering the relationship between the Church and Christianity there are those who will often leap to a rather negative conclusion. They like to focus on scandals within the Church, and on these alone, in order to quickly categorise the Church as having failed its followers. However, the insufficiencies of Church administration cannot and should not define the Church as a whole and its spiritual value.

The crimes of the Papacy throughout history are unmistakably wrong and it is unfortunate that it is individuals in positions of power who are committing such acts as by doing so they are not sending out a message that coincides with that of the Church. However, I do not believe that one can define an entire institution on these select individuals but rather we should focus on the other millions of people who make up the Christian Church. We should remember that when giving a negative view of the Church based on the actions of a few you are tarnishing with the same brush the positive actions of the many.

While one could focus on the negative aspects of the Church, it is worth remembering that there are an equal number of positive aspects. For example, the work of Catholic monks made a very significant contribution towards the growth of music, architecture and art in Western European culture. However let us not simply focus on the past but also on the present. How about the Church working together with local and international communities in order to raise money for schools, charities and hospitals? We have all heard of the Samaritans, a Christian charity, and the work they do. Anyone who has sent off one of those shoe boxes filled with presents to children in developing countries could hardly feel that the Church was a failure.

But this argument could go on forever so let’s instead lay aside for a moment all the positive and negative aspects about which people will undoubtedly have an opinion. Let us forget about the controversial members of the Church which make up only a minority of its followers and focus on the Church itself. What does it do for us?

Well, anyone who regularly goes to Church services will know of the comfort the Church can bring, the sense of community and comradery. But what is the Church there for? Aside from that place you all crowd into around Christmas or Easter with your family, it is also a place where people find comfort when they are struggling with a difficult situation. You could even treat the Church as a really great counselling service. If we define the Church as being a place where people gather in order to find solace through spiritual means then it is difficult to say it has failed us. Ask those who attend regularly, or even go yourself: you may be surprised.

Leading the proposition is Jonathan Wynne-Jones, Religious Affairs and Media Correspondent of The Sunday Telegraph, who has written on the rise of secularism. The other speaker who will be joining Mr. Wynne-Jones has not yet been announced.

Come along to the Debating Chamber on Palace Green this Friday (18th February) at 20:30.