Back On Suffragette City?

Francine Do Nascimento in UK Politics on 5 December, 2010. 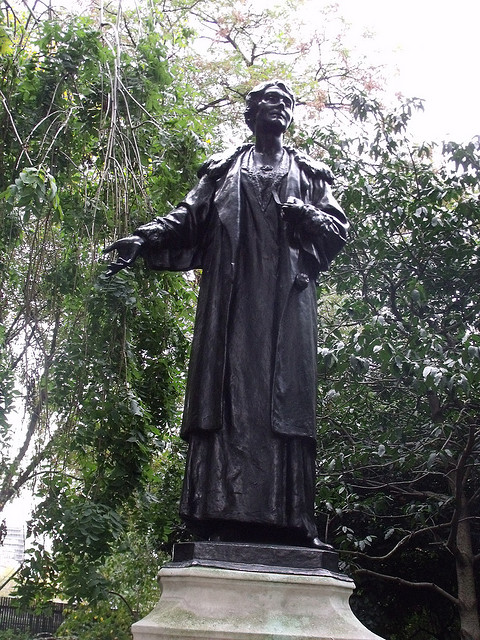 The statue of Emmeline Pankhurst (1858–1928), leader of the Suffragettes in the fight for the enfranchisement of women, located in the Victoria Tower Gardens, Westminster.

No, you have not been so buried underneath that usual end-of-term pile of work that you completely missed that Parliament is now considering the revocation of women’s right to vote: the motion of this week’s debate is a rather vintage one. On her farewell debate, DUS president Anna Holt has decided to honour the tradition of holding fairly unusual debates in the greatest fashion: she is recreating the debate held by the Union in 1905 entitled: “This House Would Give Women The Vote.” Sure, for us today, the very idea of women not being allowed the full constitutional rights of citizenship in a democracy is completely alien and, quite frankly, utterly ludicrous. But it was not so back in the early 20th century. In fact, enfranchisement was not the only right for which women had to fight: the list was actually a pretty long one, and it included items such as the privilege to work, to study, and even to own property.

In the early 19th century, women were subjected to the “separate spheres” ideology, which advocated a division between the roles of men and women into public and private spheres, respectively. This created the idea of “the perfect lady”, a subordinate, accomplished, married, asexual and economically inactive woman, which was later epitomised in the poem The Angel in the House, by Coventry Patmore. Women were expected to be submissive yet morally superior, and capable of upholding within the home those moral values which were considered to be endangered in the outside world. It comes as no surprise that not everyone agreed with this view.

As early as 1843, some people like Marion Reid argued against these idealisations: Reid published A Plea for Women, which covered areas thought to be in need of reforms. One of the most important aspects of her work was that it showed that it was mainly other women who equated womanliness with the renunciation of self. She insisted that this allegedly virtuous “self-renunciation” in reality usually led to “a most criminal self-extinction:” under the “doctrine of coverture”, a woman ceased to have a legal existence once she married because she is virtually incorporated and consolidated into that of her husband. A good example is that of Caroline Norton’s divorce. Norton was a famous figure in Victorian society who wrote poems such as “The Sorrows of Rosalie” (1829), which led to her appointment as editor of some literary magazines in London. However, although her divorce deprived her of her own money and children as well as caused her to be publicly humiliated by her husband, she could do nothing to defend herself. As the historian Lytton Strachey writes: “legally, it was no affair of hers, for legally she could have no affairs, if she was a virtuous and a married woman.” It was from views such as this that works like James Mill’s Essay on Government spurned, in which he argues that women have no need for political rights because they are already fittingly represented by their fathers and husbands.

But women were prepared to fight. After her trial, Norton started campaigning to improve women’s legal status by writing pamphlets and lobbying MPs and peers. It was largely due to her efforts that the 1839 Infants’ Custody Act (which allowed divorced women greater access to their children) and the 1857 Marriage and Divorce Act were passed (which allowed women to sue for divorce as long as they cold present satisfactory justifications). Likewise, it was partly due to the campaigns of Barbara Leigh Smith, a member of the Langham Place Group, that the first (1870) and the second (1882) Married Women’s Property Act were passed. The campaign against the three (1864, 1866 and 1869) Contagious Diseases Acts led by Josephine Butler (yes, the hill college is named after her) in 1870 blatantly threw into the open the hypocritical sexual double standard that governed people’s opinions with regards to STIs, and was successful in 1886. In Trevor Fisher’s words, “Butler […] not only challenged the Victorian taboo that sexual matters were unmentionable, but […] permanently destroyed the notion that women could not take a leading part in politics.”

It has been erroneously thought that because women had no vote they also had no role in national politics. In fact, aristocratic women could exert influence through their husbands, their power of patronage and through being political hostesses, particularly influencing elections and furthering or thwarting the careers of their male relations and friends. Chartist women used the “separate spheres” to campaign as wives and mothers for the enfranchisement of their men, and Chartist men were keen for their support, though clearly in an auxiliary role rather than as their equals.

Women progressively turned their attention to the vote for themselves because it was important both symbolically (it was a recognition of their rights to full citizenship) and practically (it was an essential step towards advancing reforms and making practical changes in their lives). Some like Marion Reid and Mary Smith argued for the vote by arguing against people like James Mill: they claimed that women were not represented by their husbands or fathers in politics because their opinions were not always identical, and that if the law could penalize women, then they should have the right to give an opinion on the making of the it. Members of the Langham Place organised a petition in early 1866 arguing that all property owners, regardless of sex, should be enfranchised, which was presented into Parliament but defeated. They were known as Suffragists (or NUWSS), and used the “separate spheres” ideology to the advantage of the movement by turning the streets where they protested into “woman-space” with, for example, embroidered banners.

Unfortunately, the Suffragists achieved little even after decades, and the Suffragettes (or WSPU, the militant faction of the movement) used this as justification for their increasing militancy in 1903. Their methods included the heckling of politicians at public meetings, physical confrontations oscillating between banging at politician’s doors and arson, making the most out of every opportunity for public displays and dramatic spectacles. When in prison, they would go on hunger strikes to protest against the authorities, which eventually led to the passage of the 1913 Cat and Mouse Act releasing them temporarily so that they could restore their health and return to prison. This created both genuine sympathy for their situation and considerable criticism against their methods.

The value of the Suffragettes’ participation is highly debatable. Some argue that they actually hindered the movement because their violent militancy only justified the position of those opposed to enfranchising women and rather alienated the majority of the few male supporters it had. However, others claim that they in fact brought the cause back to life with their approaches to protesting, as well as attracted greater publicity to the movement. Indeed, some even argue that it was greatly due to the WSPU that the NUWSS finally succeeded because, in Midge Mackenzie’s words, it “seemed more acceptable for the Government to negotiate with and grant the vote to the non-militants than for it to surrender openly to the WSPU’s threat of resumed post-war militancy.” The WSPU had declared a truce with regards to their militancy for the sake of helping the country during the First World War. Indeed, the role executed by women during the war was a major factor in their eventual acquisition of the vote.

Since the men were at war, women had to step in and take over their role as the wage-winners of the household, making all the decisions themselves. They were the backbone of the country’s war effort, having taken up positions in factories producing weapons as well as in the fields producing food. Even though the 1919 Restoration of Pre-War Practices Act meant that women were forced to lose their jobs for the sake of returning male soldiers, nonetheless their performance during the war proved that they were indispensable for Britain’s success: they had crushed the belief that they were incapable of doing the same jobs as men and this changed the way the nation and, more importantly, women saw themselves, leading to their enfranchisement. The suffrage campaign finally succeeded in 1918, but women had to be over thirty years of age to vote, while men could do so at twenty-one. It was not until 1928 that women could vote on the same basis as men.

The debate held in 1905 then must have been a pretty polemic and interesting one, considering that at the time the fight for the enfranchisement of women was still 23 years away from being completely successful. But even disregarding the political and historical points of interest, it will be, at the very least, entertaining to see two Durham alumni who were prizewinning debaters and Union officers back in their days (days which, we are told, were almost the same as those of the debate itself) interacting in a dramatised debate with two of our own student actors, all dressed in period clothes and delivering some of the original arguments given more than a hundred years ago. Intrigued? Then don’t miss the opportunity of seeing this with your own eyes this Friday, 10th December, at 8.30pm.