Arresting the Slide into Political Apathy: The Example of Question Time 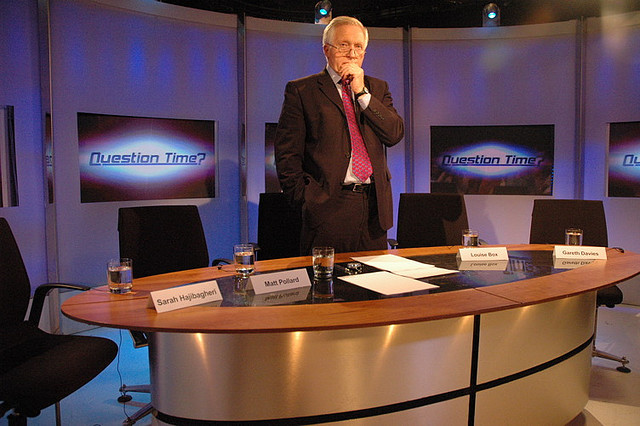 I love Question Time. I know televised politics is often looked down upon by the common man – and believe me, I’m far from an avid viewer of BBC Parliament, with balding men bellowing “hear hear” at anything that is spoken – but I can’t help but love David Dimbleby and all the broadcasting journalism he brings.

These days, it seems not many people care about politics. Oh sure, there’s the usual crowd of NIMBYs, who get stirred up about whatever issue is suddenly affecting the afore-mentioned back yard; politics fever flairs up like clockwork around every election; and if your friends got EMA and spent it on drugs – well, that pissed you off. But truly, who in our generation watches the news consistently? Reads it online every single day? Could you tell me exactly what the swing-o-meter shows you? What is this mysterious cabinet that adorns Downing Street’s living room?

I took General Studies A Level during my sixth form (yes, I went to one of those schools), and the lesson that sticks in my mind was about “Politics”. A very broad topic, I thought, to cram into one afternoon. How could one possibly cover it all – the leaders, the traditions, the current issues? Being that kind of school, it started at the very bottom, with my teachers asking us to name the three main political parties. With flow faster than Jay-Z, my best friend confidently listed, “Labour, The Conservatives, and Tories”.

Now, this lack of knowledge and interest really bothers me, and I struggle to understand it. People complain about being unemployed, the lack of investment in our infrastructure, corrupt MPs – but they do nothing about it. Most of them don’t even vote, with a mere 65% turnout at the last general election. Do people even care any more?

Granted, a lot of things bother me more than the apparent waning in political enthusiasm, but this subject is still important. One day, hopefully soon if those graduate job offers fall through our doors, we will be paying income tax. If you had a full-time summer job, you paid NI tax. Have you ever used a hospital? Do you expect police to come when your house is being burgled? Should cannabis be legalised? Why is VAT so darned high? Domestic politics, at the very least, should interest almost everyone.

Around Durham, students seem more knowledgeable than your average 21 year old. There was a protest march about fees, and all that controversy when the BNP was given a platform at the DUS. E-petitions are always popping up on Facebook as a conversation starter. In fact, as I wrote this article, a Durham friend posted the group “I blame David Cameron” to me, with the declaration that “there are some splendid photos in there”. (He was not lying – do check it out for some light relief.)

However, I fear that this interest is merely superficial in some. A particular example of this presented itself to me during the general election, when I was a fresher in college. A girl on my corridor insisted everyone should vote Green, telling literally anyone who mentioned the election that Green was the way to go. She may have even convinced some people to vote that way. When I asked why she supported them, she replied simply: “I really care about the environment”. Fair enough – I’ve known people vote for parties based on the leader’s haircut before, so this wasn’t an atrocious reason by those standards. On the morning of the election results, I informed her that Caroline Lucas had been elected. Presuming she’d be delighted that the leader of her beloved party would sit in Parliament, she replied with an entirely unexpected question: “Who?”

So finally, readers (thanks for sticking with me) – this is where my love of Question Time comes into play. If you’ve never seen it, and shame on you if that is the case, Question Time is hosted by the lovable David Dimbleby, with a panel of five guests. Easily accessible, fun to watch, there is a five-person panel which takes questions from an audience in a different location every week. Usually the panel comprises: a celebrity (Ricky Gervais, Germaine Greer, Piers Morgan-esque figures – no room for the intellectual heights of TOWIE here); a Labour MP; a Tory MP; a ‘minority’ MP from Lib Dem, Green, or UKIP; and a wild card – often another Labour or Tory MP.

And the passion of the audience is a joy to watch. An absolute joy. Yes, you do get the occasional oddity (recently one man kept bringing the highly interesting debate about HS2 back to his cherished Watford train service which had recently been cut), and from time to time you also have to listen to people getting angry about incorrect statistics and misquoted policies, only to be corrected by Dimbleby in a beautifully patronising way.

But there are real gems among these people. I saw a 17 year old complaining about the removal of her EMA, years ago now. But she had spent her own money travelling to this studio, and given up an evening of being with her friends, just to put her point of view to a politician. Unemployed people, far from just grumbling in their armchairs about how there is no work, ask politicians what they plan to do for growth. When Tony Blair appeared on it, a lady complained about the fact that she wasn’t allowed to book an appointment weeks in advance, because the NHS needed to meet its target of giving appointments at short notice. He agreed with her, and changed the target’s wording to prevent this. Enthusiasm.

I do adore the passion of the audience. They convince me that there still exist significant numbers of people who care. Hundreds go to each broadcast, sitting quietly and patiently to put their point across. Debates between viewers continue long after the programme finishes, and it is attended by old and young alike.

Question Time shows people still care about politics. And I love it.