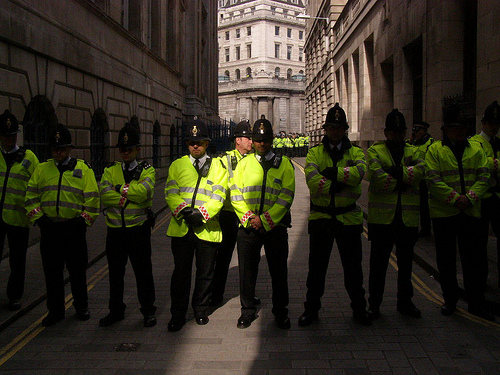 Are the police dealing with anti-social behaviour?

It is a familiar story – town centres on a Friday and Saturday night resembling war zones, gangs of youths committing drink fuelled violence and vandalism, nuisance neighbours making families’ lives a misery. Anti-Social Behaviour takes many forms but it is a crime that blights the lives of those individuals and communities who suffer under its grip. Indeed, more than a third of those who have experienced Anti-Social Behaviour say that they have altered their everyday behaviour as a result – perhaps by staying in their homes or avoiding certain “no go” areas.

In the last decade, we have seen a plethora of legislation and initiatives to tackle Anti-Social Behaviour from New Labour’s “Respect Agenda”, the notorious imploration to “Hug a Hoodie” and David Cameron’s promise to be “tough on crime and the causes of crime”. It is an issue which is high on the public agenda but one which the police are still failing to address, underestimating both its innate seriousness and its damaging impact on neighbourhoods and communities.

This week Anti-Social Behaviour hit the headlines again with a new police report that calls for a “new start” in the tackling of Anti-Social Behaviour by the police. Sir Dennis O’Connor, Her Majesty’s Chief Inspector of Constabulary, warned that police and communities together “must reclaim the streets from antisocial behaviour,” and advocated a joint approach in which greater police resources would be utilised to mobilise communities to address the problem.

Sir Dennis was quick to recognise the previous failure of the police in addressing Anti-Social Behaviour noting that, although it now accounts for 45% of all police calls, many officers still do not regard it as “real crime” and are consequently slow to act. He was also keen to stress that the most effective way to address Anti-Social Behaviour was through “feet on the streets” and to warn forces that cutting spending on the issue would constitute a “very serious mistake”.

But perhaps this promise of a “new start” may merely be a false dawn. After all, this criticism of the low prioritisation of resources to tackle Anti-Social Behaviour builds upon a previous report by Her Majesty’s Chief Inspector revealing that only 11% of officers were “visible, available and able to respond or intervene” to street crime. Indeed, only days after Sir Dennis’ comments were made, it was announced that Liverpool will become one of those city centres “surrendered” to Anti-Social Behaviour as Merseyside Police stated their intention to abolish its antisocial behaviour taskforce as a cost cutting measure ahead of government budget cuts which could see policing resources cut by 25%.

It seems unlikely then that an increase in police on the beat is going to substantially reduce ASB alone. Indeed, research suggests that police methods such as ASBOs are simply not working, resulting in breaches, reoffending and the further waste of precious police resources. The onus, it seems, to tackle this problem head on must inevitably lie with the public. Whilst the clear limitations of police resources make such a public based approach a necessity, it seems also desirable to rethink society’s approach to Anti-Social Behaviour and take responsibility for what is occurring in our neighbourhoods and on our streets.

Recent statistics suggest that 9 out of 10 survey respondents believe that the responsibility for dealing with ASB lies with police but there is a growing body of evidence to suggest that one of the most effective methods for reducing ASB is neighbourhood intervention. Research proves that early intervention is the most effective strategy for eliminating persistent ASB, especially among the young because, in 50% of cases where the strategy is employed, the behaviour will not reoccur. This is a hugely significant statistic in changing Anti-Social Behaviour strategies because it is communities, neighbours and parents who are truly on the front-line of ASB and consequently are best placed to implement an “early intervention” in cases of nuisance rather than serious behaviour. Community policing, neighbourhood watch and the provision of youth facilities are methods proven to work in reducing this kind of ASB but they need the public to come together, not only in acknowledging the unacceptable behaviour, but also in agreeing to face up to it rather than relying solely on the intervention of outside agencies.

Interestingly, it seems that the public, like the police, are failing to address Anti-Social Behaviour in their communities, with less than a quarter of ASB incidents actually reported to police in the first place. Perhaps through starting to consider Anti-Social Behaviour our problem, parents, local businesses and community groups can work with police to tackle this problem together – promoting a more community based, cohesive approach where the vulnerable and the victims of Anti-Social Behaviour are protected through a network of measures that prevents the isolation and despair so prevalent in these cases. This seems to be at the heart of Sir Dennis’ thinking as he seeks to redeploy police resources in favour of cost efficient and effective schemes.

It is also important to remember that the term Anti-Social Behaviour refers not only to extreme behaviour like intimidation or violence, but to less serious (but inevitably detrimental) forms like littering and loitering. Whilst it is wholly appropriate for the police to deal with serious offences, it seems absurd to waste precious police resources on issues that can be safely tackled through the assumption and maintenance of basic civic duty. It also seems wrong to criminalise behaviour, especially in the young, which can be dealt with more effectively through other means – good behaviour contracts, parental supervision, community projects and the like.

Whatever your politics, perhaps it is time for Cameron’s “Big Society” where neighbourhoods take responsibility for their streets. As Sir Dennis’ report concluded, tackling Anti-Social Behaviour should be a priority not only for the police force but for communities. Taking responsibility in this manner has huge potential reward, though there can be no doubt that “retaking the streets” needs a joined up approach where communities and the police force work together. Whilst new investment is almost certainly too much to ask for in austerity driven times, much can be achieved if only Anti-Social Behaviour is pushed up the police and the public agenda, so that together we can revaluate and reinforce those methods that have proven effective.