An evil coalition? Or a much-needed compromise? 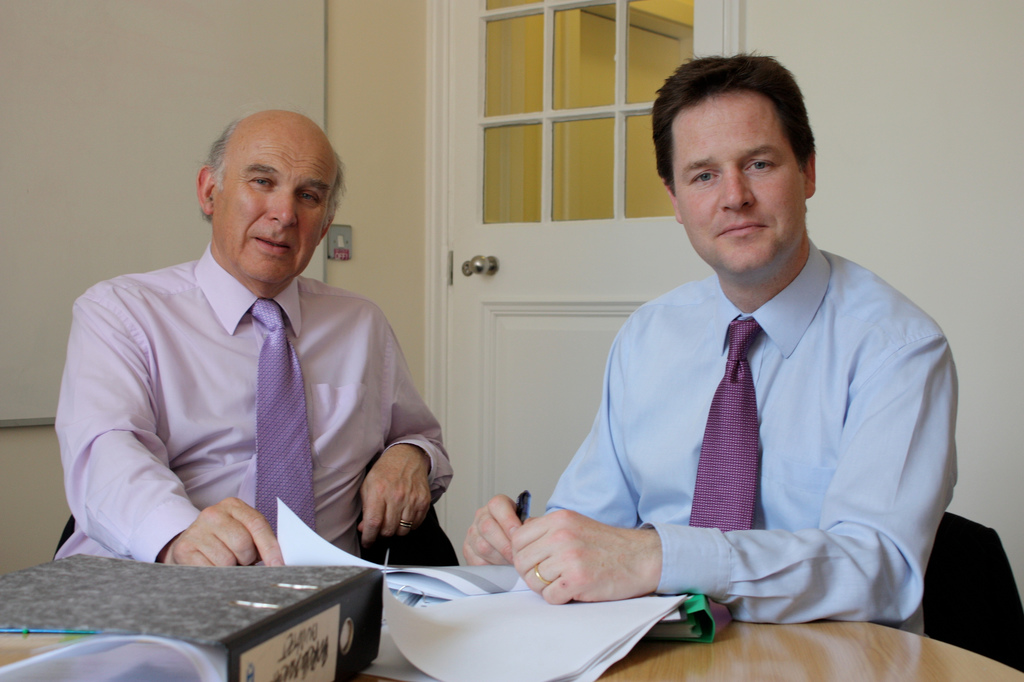 The Coalition is the worst thing to happen to Britain since World War II. Less a coalition than an unholy alliance between a deeply evil cloned son of Margaret Thatcher and a snivelling schoolboy who claims to be a liberal but is clearly an incorrigible, black-hearted fascist at heart. Saruman and Gríma Wormtongue, ruling over the vicious destruction of the Fangorn forest of public services. Quite possibly the regents of Satan, as shown by the dastardly treachery of the duplicitous Clegg.

Sadly, this is not far shy of the sort of ridiculous rhetoric one reads in certain papers and hears from Labour, the trades unions, and some of the smaller parties. Supporters, members and Labour MPs see the opportunity in the Coalition for a quick and easy road back to power – just relentlessly attack the Coalition until it crumbles, or enough voters are sufficiently terrified that they depart the Lib Dems swearing oaths of undying fealty to Labour, their only true friend all along. Logic or reason, though, has totally departed from these critics. In evidence, vide the former Labour minister who wrote to his Conservative successor attacking a policy that he wanted reversed. A policy which the Labour MP had been responsible for in the first place before leaving government.

The Lib Dems bear the brunt of these attacks, being generally labelled as traitors who were probably really all Conservatives anyway.

The only alternative that is ever suggested, however, is the proposed Rainbow Coalition of left-wing parties. In order to get a majority of one, this coalition would have needed Labour, the Lib Dems, the SNP, Plaid Cymru, the Green MP, and the SDLP from Northern Ireland. Several senior Labour figures, such as Jack Straw, have admitted that this alliance could never have worked. Not that this prevents them continuing to attack the Lib Dems for going into coalition with the Conservatives.

Aside from the deranged fantasy of the Rainbow Coalition, what else is ever suggested by the Coalition’s critics? The alternative was a Conservative minority government that would have been even worse (from a left-wing/progressive viewpoint) than the Coalition, or simply holding another election. Would the electorate have rewarded Labour or the Lib Dems for this? Unlikely. Don’t forget the 1997 Winchester election, where the incumbent Conservative MP Gerry Malone was defeated by two votes by Lib Dem Mark Oaten. The Tory challenged it, forced a by-election, and lost by 21,556.

From a progressive standpoint the Lib Dems did the best thing in the circumstances: form a coalition with the Conservatives (who had effectively won, gaining a higher vote share than Labour had in 2005 when they won a sound majority), thereby reducing the damage (as they see it) that Cameron’s government could effect. Inside sources say that the Lib Dems are making a genuine difference in government, in Cabinet, and in their departments; the problem is it just isn’t very visible to the public.

I will admit at this point that I am a Lib Dem, though not an ardent, till-death-do-us-part one. However, my main problem is not that “my” party is being attacked. It is the grounds on which it is being attacked, which have shown a great deal of political immaturity, especially coming from a party and wing that generally support electoral reform – reform that even its supporters acknowledge would lead to far more hung Parliaments. It could hardly be expected that the Lib Dems – the junior coalition partner – will dictate the government’s agenda. All that can be expected is what the Lib Dems have: the ability to mitigate certain policies, drive others up the agenda, a variety of small-to-moderate but significant achievements.

It would have been irresponsible for the Lib Dems to do anything else. We are in a bad situation economically, and the more voices around the table deciding on cuts the better – for all of us. Obviously, some cuts the Lib Dems would not have wanted, but the Conservatives have more support and have the right to a bigger say.

Labour’s hypocrisy is also astounding – had the Lib Dems gone into coalition with them, Labour would have expected them to keep quiet about Iraq and compromise on top-up fees, ID cards and so on. Labour did not even get 30% of the vote; the Lib Dems were right to join the party that got more than a third of it. Not on ideological, partisan terms – simply because the country needed as stable a government as possible, with as broad a voice as possible (insofar as these are compatible), following both the election results and the economic/budgetary crisis.

Many Coalition critics would tell you that they accept all the above, and that their problem is what the Lib Dems are putting their name to. They are not putting their name to anything: we know perfectly well the two Coalition parties don’t see eye-to-eye on many things, and any decisions taken are taken after discussion and compromise that, governing alone, would not be made. The context demands discussion and compromise, indeed, it demands discussion from all parties.

It would be far more helpful if the other parties, principally Labour, calmly and maturely proposed alternatives, talked to the Coalition about their policies, and talked to the country like grown-ups rather than children who must be warned about the scary BogeyClegg under the bed.

Thankfully it looks as if Ed Miliband may be taking the party more in this direction. Five years of continual back-and-forth over Nick Clegg’s exact personal ideology is hardly going to help anyone, least of all the poor and needy who need aid. So I am categorically not saying You Must Support The Coalition; but I am asking for a more reasonable and reasoned discourse.