A Critique of Russell Brand’s Revolution 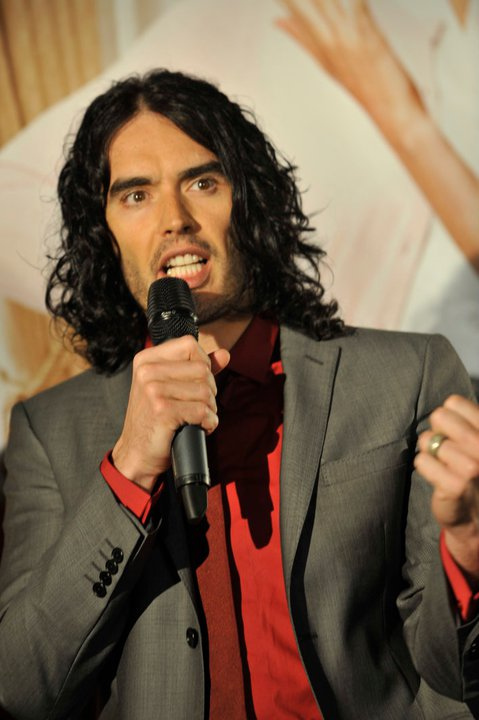 Russell Brand: A demagogue of our times?

The New Statesman magazine, which has published articles by such leftist legends as Shaw, Orwell and Hitchens, chose Russell Brand as a guest editor last month who promptly composed a piece on revolution. He has taken the media by storm, being interviewed by the BBC, the Huffington Post and numerous other outlets.

But Brand’s ideas, for all their seemingly glossy frontage and laced with comic qualities and grandiloquent sesquipedalianism, do not match up to reality. He merely comes across as a hypocritical and attention-seeking clown.

So where to start?

In his plush hotel room, with his fancy, flamboyant fashion (probably picked out by his stylist which he happily swanks about in his article) he admits, in answer to which “alternate political systems” he would like to see, that “I’ve not invented it yet” and that he has “had a lot on my plate”. I can’t work out why, if he cared so much about alleviating poverty and ridding the world of greed, he is just yapping on and not actually doing anything physically, or why he complains about gluttony, when one only has to look at where he lives (last month he bought a 2.2 million mansion in Hollywood with 4800 square feet of space), where he was staying for that interview and what he wears. With his logic, does he really need all of that luxury? He hates profit – “the most profane word we have” – but this feeling is not quite entrenched enough to prevent him from drawing personal benefit from it. When he complains about the lives of people whom he met in Africa, he juxtaposes it with his attendance at a Givenchy fashion show in Paris. He writes that “[the show’s] decadence was [the African’s] degradation”. When he laments, in his personal statement-esque fashion, that “global ignorance hit me hard when I went on a Comic Relief trip to Kenya”, what did he do? He shed a tear and moved on to the next thing.

This is Brand’s problem. He has every right to talk about serious stuff – but if he cannot support himself with facts about how he would create a superior system, then he ought to go back to the drawing board, stop all the interviews and articles, and get down some realistic and prudent ideas which are feasible and which he can actually defend. He has no idea what to do. He admits that he “[doesn’t] know much about politics” and complains to Paxman: “Don’t ask me to sit here…and devise a global utopian system.” If you are calling for the complete destruction of a stable system which has characterised this country for years and you have no idea how to replace it, then pipe down and go back to your spiritual cave.

Brand vilifies democracy, which he sees as saturated with “frauds and liars”. But without democracy, we would have dictatorship or anarchy, both of which would inevitably see heads rolling down the streets and people hanging from cranes. Oh but don’t worry, Brand farcically says that there will “definitely [be] no killing” because “I’m a vegetarian”. If he had any understanding of history, he would realise that revolts do not usually go the way the architects wanted. Revolutions get hijacked, whether we look at 18th century France or 21st century Egypt. “We now must live in reality”, he writes: yes we do, a reality based on the real world not on an illogical delusion.

Brand said that “voting is … tacit complicity” for the political system. But if you do not vote, you do not make a difference anyway. Every few years we have the chance to hold our politicians to account – we have the ability to create change using the ballot box and not by criminal acts of rioting. People’s faith in politics and politicians is fading but think fast before you rush to the barricades – seemingly celebrated causes often have calamitous consequences.

Of course I understand that there are problems with our society and our political system. There are too many politicians who have done nothing with their lives except feed off the umbilical cord of their parents and rise up the ranks of what seems to be an increasingly insular political establishment. We need more politicians who have been in the real world – experience is the best education. I understand how hard people’s lives are, how hopeless people feel, how little morale people have left. But is the destruction of the democratic system going to solve this? If you think chaos and disorder will be beneficial to people’s lives, think again. Brand goes as far as to call for us, the people, to “revolt…with the spontaneity of the London rioters, with the certainty and willingness to die of religious fundamentalists”. By blowing ourselves up, by rioting, by causing the destruction of our democracy, Mr. Brand, do you seriously believe that this will bring happiness and hope to all?

Although he has built up a reputation for controversial stances, Brand comes across as a facetious, facile fraud who belittles a serious issue. If you have not read Brand’s articles or listened to his interviews, you must. Just try and get past the impetuous, nonsensical, wishy-washy, slapdash drivel that has been spat out with such little thought to common sense and rationality. He has usurped an important cause and has submerged it with an ignorant view of revolution and weird and cack-handed tangents to ecology, biomechanics and “the model of the pre-Christian man”. It is not only an artwork of the irrational but a masterpiece of the irrelevant.

If Brand had read Antigone in more detail, he would realised that its main motif is not “respect for the dead”, which he so bizarrely mentioned, but tyranny, state control and dictatorship. It is about what happens when a man believes in his own providence and about what happens when a man aspires to the knowledge of gods. When one believes in the absolute rightness of your cause without any check, gulags, gas chambers, death camps are the result. Calling for revolution is juvenile, rash and irresponsible. If Brand got his way, it would be my head, his head and many other heads on spikes as the hopes and dreams of his ‘followers’ came crashing down to reality. He would not then “want a bit of a laugh…at the spectacle of disruption”.

When I went to vote for the first time in my life last November for the Police and Crime Commissioner election, I stood in the ballot booth, crossed one of the boxes and left. A simple and swift movement with such significant importance. As I walked out, I thought to myself people die so that someday they, or their descendants, can have the power to choose for themselves who will run their country and protect them. I acknowledge that there are problems with the system. But I am proud of our democracy, and I am proud of those people around the world who have more valour and more mettle than some cocky, self-serving, self-absorbed hippie, who fight and die for that right.

Do not disenfranchise yourself by not voting. Be empowered, become involved in politics, and make a difference to people’s lives. I beg you, do vote, do take part in our society and never allow yourself to be taken in by fools.