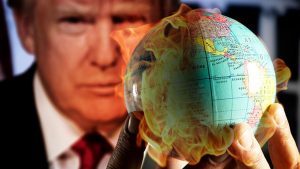 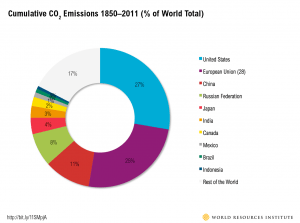 While it may be “too late” to reverse climate change, we are ignoring the reckless and irresponsible actions of the second biggest contributor to the climate crisis on the planet.

The USA is responsible for “almost a third of the excess CO2 that is in the atmosphere but it has only 4% of the global population ”. Worse still, the USA is the largest contributor of CO2 emissions per capita (double that of  citizens of China, Japan or Europe.)

Yet, since Trump’s inauguration:

The USA has pulled out of the most significant climate agreement in history, abolished almost all previous regulations that tackled climate change, attempted to revitalise the coal industry, has climate change sceptics in the highest environmental positions, and the majority of the population is not aware that humans are causing global warming.

Trump made his opinion infamously known on Twitter in 2012 by saying that global warming is a “hoax invented by the Chinese to attack US manufacturing”.

In a 2017 interview with Piers Morgan:

Trump has literally said (see above) that he doesn’t “necessarily agree” that humans have been the overwhelming cause for climate change. That there are also scientists who “dispute” climate change, and all he wants is the “cleanest air”. These are ill educated, propagandist, and nonsensical words from the most powerful man in the world. He urgently needs to implement all forms of green technology and every possible regulation to even come close to reversing climate change, now. However, he doesn’t even believe it is happening .

She could not answer basic questions posed by the Senate committee on the environment; “You don’t believe climate change is real?”, she replies “I’m very uncertain”.

She also criticised the 2007 Supreme Court decision that the federal government had the legal authority to regulate carbon dioxide as a pollutant under the Clean Air Act, “Carbon dioxide has none of the characteristics of a pollutant”.

Robert Murray, the head of Murray Energy (one of America’s largest coal companies) called the Paris Accord “illegal” and is in the running for a position at the Environmental Protection Agency right now. 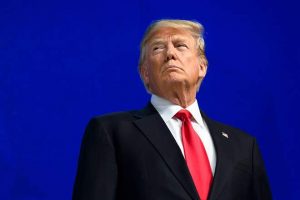 The policies above demonstrate one motive only, to maintain profits, and will quite literally exacerbate the effects of climate change. These are just a few of Trump’s current policies, and this agenda may lead to 80,000 extra deaths per decade. 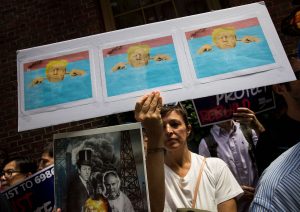 Activists protesting after Trump withdrew the US from the Paris climate accord last year (Source: Drew Angerer/ Getty images)

One would expect the above policies to evoke fury and outrage within the American population, to the contrary, only 35% of Republicans realize humans are causing global warming. However this pattern is not applicable to Democrats (85-90% of Democrats are worried about global warming)

Most quintessentially, in 2015 Trump announced America’s withdrawal from the Paris Agreement. The most important climate change agreement in history, signed by 195 countries to tackle the crisis that America is most responsible for.

“To protect America and its citizens, the US will withdraw from the Paris Climate Accord… disadvantages the US for the exclusive benefit of the other countries… taxpayers with lost jobs, lower wages, shutted factories and vastly diminished economic production”

Trump is viewing a crisis that his country is responsible for though a narrow, selfish, cost benefit and, as will be discussed, incorrect lens.

If the agreement will kill so many jobs and cost so much money, why are businesses so uniformly supportive?

Here’s who disagrees with Trump;

Exxon (argues that cleaner burning natural gas can help the USA reach emissions goals), The World Coal Association (endorsed the deal as one that gives countries the chance to prioritize technology that could make coal fired power less environmentally damaging), The Business Council for Sustainable Energy, EBay, Lyft, HP inc. Overall, a staggering 360 companies wrote to him saying they support the agreement. 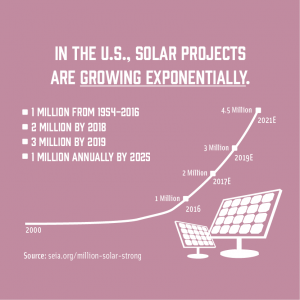 Solar Projects in the US (Source: seia.org)

Obama displayed the necessary steps towards repairing America’s contribution to climate change, attempting to implement the “Clean Power Plan” aiming to limit emissions from the energy sector. It would have saved the average American household $1,868 on electricity bills over 15 years.

However, of course, it never came into force. It was loathed by the US supreme court in 2016. Trump’s words as he rolled back the plan “Boom, gone”.

If we are to tackle climate change in the speed that is necessary, the first step is for America to take action. Instead of looking aghast at Trump from a distance, we must expose his stance on climate change, and hope that democratic oversight of the house of representatives takes on the responsibility of the green revolution.