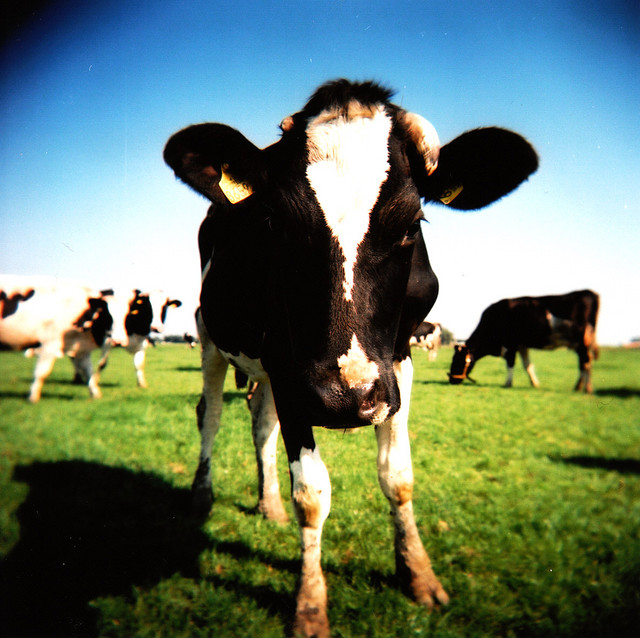 Eating meat can be detrimental to your health and the environment.

For a lot of people vegetarianism might seem clichéd and “hippy-ish”, partly due to vegetarianism’s portrayal in the media, but for me it’s very important since I’ve been a vegetarian all my life. The 1st of October is World Vegetarian Day and I thought I’d take the opportunity to challenge some of the stereotypes and talk about my experiences.

One of the things I find most interesting is the different reasons people have for choosing to not eat meat. This year, three people in my house are vegetarian but we all have very different motivations behind it. My reasoning is primarily for environmental concern, arising from the fact that meat production puts more greenhouse gases into the atmosphere than transport, whereas Laura became vegetarian for health reasons and decided she quite liked it and Mike simply believes that killing animals is wrong.

My motivation for being a veggie – being able to reduce my environmental footprint on the planet – inspired my interest in the Meat Free Mondays movement, made popular by Paul McCartney. The campaign encourages people to steer clear of our furry friends for one day per week and embrace the world of vegetarianism. Some cities, such as Ghent in Belgium, have even gone as far as becoming completely meat-free for one day a week, including elected councillors.

Over the last year, I’ve been battling with a spin on the Meat Free Monday campaign by attempting to go vegan for one day a week. As a vegetarian, I usually get remarks such as “no meat no meal” and looks of confusion as to how vegetarians can possibly survive without meat. However, I’ve found that I am also guilty of the same prejudice against veganism. I honestly don’t think I could ever be vegan due to my intense addiction to dairy products; cheese being my milk–based product of choice.

Being vegan is incredibly difficult; at least for me. I found myself innocently eating home-made carrot and hummus sandwiches, only to realise I had naively not checked the ingredients on the loaf of bread and had failed already. I’d then be eating my way through my mid morning salt and vinegar crisps only to find I had failed again! Also, the cravings for cheese, eggs, yoghurt and everything and anything dairy keep coming and coming throughout the day and, being taunted by Yum’s selection of sandwiches, cakes and chocolate, all offer me little solace in my temporary veganism. However, I have been powering through and slowly but surely getting better and learning which things I can eat and reading the labels much more carefully.

Attempting to be vegan has made me see that there is a world without dairy products if you look hard enough. It has also encouraged me to step out of my comfort zone and try new things like soy milk and vegan chocolate that I probably wouldn’t have tried before. Even if you have no interest in reducing your environmental impact or don’t agree with other reasons behind vegetarianism, have a go and you might expand your dietary horizons from the rotations of spag bol and beans on toast (and the occasional pepperoni pizza).

So if you feel like a challenge and want to try something new, have a quick look at www.meatfreemondays.org.uk where there are some pretty cool meal ideas – my personal favourite being the wild mushroom kebabs.