Triage: Human Arrogance and the Beast

‘The sorting and allocation of treatment to patients, especially battle and disaster victims according to a system of priorities designed to maximize the number of survivors” is the definition Merriam-Webster put to the word ‘triage’. I’m sure you, being learned and up-to-date in all-things ecology, have read about this, heard about it, and have probably formed your own opinions of it by now. It is an idea that has been in the pipeline for some time, apparently, but it is only now that it has risen to such a worrying level of attention that it has gained acceptance and reinforcement from scientists and conservationists the world over. In the most basic terms, the phrase means that the higher-ups of world conservation will let increasingly-endangered species, such as tigers and giant pandas die out, and concentrate their efforts on less-endangered species that don’t need the resources as much as the aforementioned animals.

Now, you can think what you like about this; you may think that it is necessary for a couple of species to be left to rot in order to save several other species. Indeed, if we just go back to the Merriam-Webster definition, the words used pertain to the scenarios of an emergency hospital on a battlefield or a hurricane-swept country. If someone is lying on a stretcher without a head, you know they’re dead and you won’t waste time trying to bring them back to life; you’d rather remove shrapnel from a patient with good chances of survival. It’s basic logic that’s been around for generations.

That’s the exact same basic logic that will come into force in the world of wildlife conservation, should it be implemented. As we all know, tigers and pandas and such like are endangered because of greedy human expansionism. We tear down their jungles and pave over their habitats with a nice big grey car park. Now then, if we are judging the tiger population to be a headless body on a stretcher using up valuable resources, then we judge them so because of our unwillingness to actively stop the unnecessary urban development that has forced them to the brink. It has nothing to do with the creatures being impossible to save, it is to do with the rapid swelling of concrete being impossible to stop. We are not powerless to save tigers and pandas, we are powerless to end the all-consuming growth of capitalism in all its paving-slab glory.

And, let’s be honest, it is our own (in a collective sense, not specifically you and me) ineptitude as conservationists and, let’s face it, human beings, that we have not done more to stop the menace that replaces lush, exotic greenery with a lighter shade of black. This misdirecting of efforts and the half-hearted action will be the demise of these magnificent beasts. 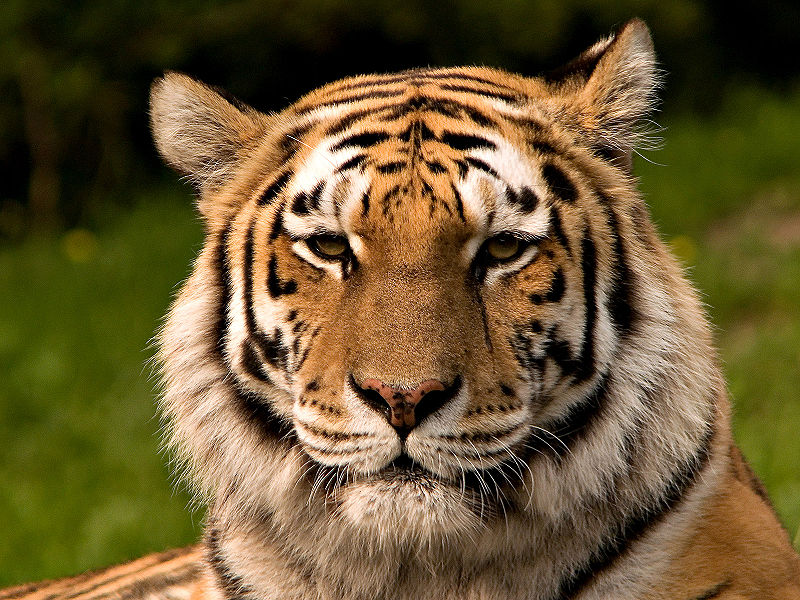 Deforestation, poaching and global warming have all contributed towards extinction, putting species such as the Siberian tiger at risk.

But it is not just this that will certify extinction. There’s more to it: the human character.

The grotesque arrogance a person must have to accommodate to feel they are in the correct, moral position to make a judgment that authorizes the demise of our most rare and beautiful living creatures, is nothing short of playing God.

If there was a unanimous agreement between the world’s leading ecologists to employ a policy of triage, if we allow some bloke in an Armani three-piece to denounce not one, but several species as ‘doomed’, then it is only right that humans be at the mercy of such absurd judgment as well.

After all, with the impending morbid darkness of the economic crisis, the increase of the world population to ‘unsustainable’ levels (what do you expect? Our reason for being is, after all, to reproduce), and with the never-ending battle of covert and overt wits between the West and the “concerning” situation of nations such as Israel and Iran, which is sure, to some degree, to lead to nuclear disaster at some point, teamed with the fact that through our relentless murdering of Earth we won’t have a planet to live on in the future, we, us humans, have about the same dire chances of survival as the sublime and endangered beasts that some of us render as ‘impossible’, or, perhaps a more appropriate phrase; too ‘inconvenient’ to save.

To stop conservation activity for the creatures whose land we have mercilessly pillaged, would really be the hammer blow in our ongoing battle against the nurturing of worldwide natural ecology. We have shot and poisoned and skinned and butchered these animals for so long, that we will now tag their toe and condemn them to rapid extinction. How can anyone justify that?