The Tragedy of Democracy?

Dave Groves in Environment on 9 November, 2013. 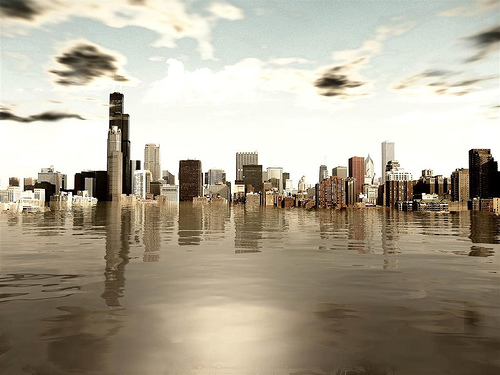 Chicago 2025? Democratic societies may struggle to make the necessary behavioural changes before it’s too late to avert climate disaster.

Recently Russell Brand gave an interview with BBC’s ‘Newsnight’ in which he called for a revolution in politics given that there is widespread apathy amongst young people towards the political elite. Whilst it was largely centred on the economic disparity present in the modern Western world and his desired socialist movement as its cure, he made the bold statement that democracy is “not working very well given that the planet is being destroyed”. This calls into question the very nature of democracy and its effectiveness in dealing with what will be the defining issue of this and the next generation. Whatever your political persuasion, it is usually within a democratic framework and it is this which makes Brand’s remark far more subtle than the rest of his ideas of revolution and hints at the problems faced because of the political system as it is.

So, is democracy holding back the actions necessary to reverse climate change? In the democratic system political parties propose policies that will encourage people to vote for them in the hope they win a majority and rule in office for five years, during which time they are judged on how effective their policies are. Today, though, money is tight and often the success of a party can be determined on how the money is spent during their reign. And herein lies the problem – political parties seek to improve the living standards of the population during their time in office and they can only guarantee power for one term. Five years may be a significant amount of time politically but it is a blink of an eye in climate change terms. Policies need to be in place that will be effective for a generation and as it is today, there seems to be no incentive for a democratic government to put them into action.

Money needs to be spent effectively now in order to allow the positive effects to be felt many years into the future. George Osborne’s recent announcement that Britain is to begin building the next generation of nuclear power stations (whatever your opinion on nuclear power, it is a step away from being oil and gas dependent) is the exception rather than the rule and even that was prompted by the warnings of the Royal Academy of Engineers that we would be stretched “close to capacity” by a long winter or unplanned plant shortages. This would mean a higher risk of power outages in the next five years when it is quite likely Mr Osborne will still be Chancellor. So even this policy, which provides the UK with significant direction in the future of its energy supplies, is motivated by the prospect of being in the next parliament.

The recent furore over energy prices has brought into question the role and size of green taxes in energy bills. Green taxes consist of subsidies to renewable energy operations and individuals with solar panels, as well as a way of raising money to pay for existing houses to be insulated to the standards set by current regulations. The taxes, which currently make up around 9% of the average energy bill, are a typical ‘short-term pain for long-term gain’ policy, but in the current economic climate they have come under threat and the Government is being urged to reduce them. No party has issues with how effectively the taxes are spent, they only seem concerned with reducing the overall price of energy and green taxes are seen as the easiest thing to cut as the repercussions will not be felt for many years.

Whilst politicians may be unwilling to pay the price now for overall benefits in the future, some have manoeuvred in such a way that they can show themselves to be considerate of the future without burdening themselves with the price of bringing about a better tomorrow. The most substantial bureaucratic move in terms of reversing climate change was the Kyoto protocol, signed by 191 countries (both democratic and not) in 1997. The agreement was for industrialised nations to cut carbon emissions by 5% from 1990 levels in the period 2008–2012. It was in 2007, however, that the Japanese Prime Minister Shinzo Abe announced his ambitious ‘vision’ to see greenhouse gas emissions cut by 50% in 2050. Both of these targets, although especially Abe’s ‘vision’, garnered positive media coverage without actually putting into place the measures needed. It was and will be left to the people in power in the future to pay the short term price and the negative press coverage that accompanies it, as current politicians in the UK are discovering with the aforementioned green taxes.

The benefits of democracy are not to be belittled: the freedom and power it gives to people are unparalleled, and perhaps it is only when we see countries without a democratic setup that we truly appreciate the values it holds. However, it would be foolish to claim that the system is perfect and it would seem that the struggle to rein in climate change is partly due to such imperfections. One might find Brand’s interview to be hypocritical (he claims profit is a “filthy word”, despite himself having a reported net worth of 15,000,000) and lacking in viable solutions, but his point against democracy was genuinely thought-provoking. The science of climate change is progressing rapidly, but it needs to be incentivised both politically and economically in order for it to be implemented throughout democratic regions for the benefit of the world.