The Silent Sufferers: Shouldn’t animals have a right to their environment?

Elly Greenway in Environment on 7 December, 2013. 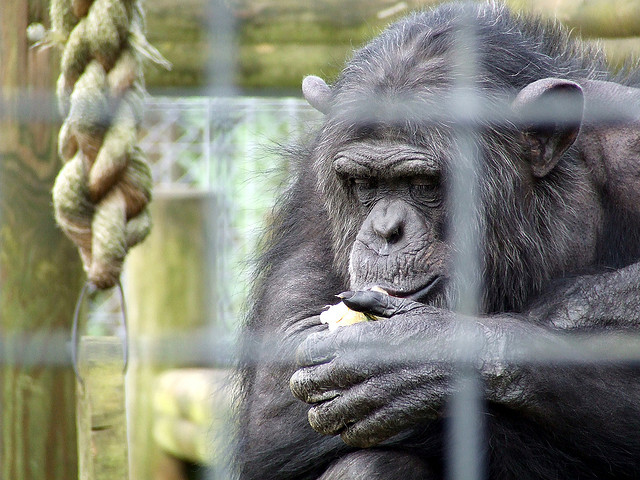 Caged in: Other animals have a right to live in their natural environments unconstrained by man-made bars.

Scrolling down my Facebook news feed, I am met with the usual array of ‘frapes’, ‘selfies’ and shamelessly plugged university events. Yet hidden amongst the frivolities of everyday social networking, I find a particular video which suddenly gives a whole new dimension to my otherwise alarmingly unproductive procrastination. The video was entitled ‘Laboratory Chimpanzees Released Into Sanctuary After 30 Years Of Cages: Their Reactions Will Ignite Your Heart, Let Alone Warm It’ and was announced by a Facebook friend with the simple instruction ‘prepare to do a cry.’ Thankfully I successfully evaded the embarrassment of a watery downpour in the rather too public sphere of the library and yet, as the featureless metal door of the monkey enclosure was gradually peeled away from its frame and a shard of pure, white sunlight crept through the doorway for the first time in three decades, the lump that appeared in my chest was well justified.

The unconcealed thrill of the monkeys as they take their first steps into freedom (well, the relative freedom of an outdoor enclosure) is so stark and pure that it would be difficult for even the most unyielding sceptic to dispute that animals possess an emotional capacity.

After a prolonged moment of hesitance and disbelief in the face of this new reality, the chimpanzees pull each other into a strong, brotherly embrace before setting out into the awaiting £3 million grassy refuge. While some chimpanzees seem to wait for the more apprehensive within, others roam around their new home with an infectious joy, reaching out to their fellow inhabitants as they pass in a way prohibited by those thirty years of bars and solitude.

These thirty-eight chimpanzees were the survivors of a series of failed experiments carried out in Austria in an attempt to discover a ground-breaking HIV cure. Since none of these chimps developed AIDs (though some are HIV positive), the greatest damage to these animals is surely the wasted decades in which their daily routine was broken only by the addition of further chemicals into their blood streams and they were isolated from the simple, taken-for-granted ingredients of nature: the wind upon their cheeks, the feel of sunlight on their backs, the blankets of fresh grass beneath their feet… Instead, it seems theirs was a room with a view only of metal bar after metal bar: a far shout from the immense tangle of vines, buttresses and forest giants that would have been their native African jungle.

I do not intend to make any serious comparison with the truly horrific discovery of three women in South London who had been kept as slaves for the last thirty years, and yet the agreement in the timing, both of the media engagement and the duration of the oppression, seems too coincidental to ignore. When reading about the women’s misfortune we are struck by the injustice dealt to them, the wasted years, the time that cannot be retrieved and the inhumanity of their treatment. But to what extent is this story, which sparked national outrage, deemed more deplorable by the supposed superiority of humanity over the animal world? And to what extent is this justified? The video clearly demonstrated the contentment of the chimpanzees at the onset of their bright futures, and there is no denying the suffering that thirty years in bars would have produced. Whether we uphold the religious values of stewardship or not, surely, in humanity’s position of power, we have a moral obligation to prevent the distress that comes from being separated from our natural environments.

With film worthy music ebbing and flowing with the reactions of the chimpanzees and a purposefully dramatic headline, the emotion that I have no doubt you would all share on watching this video is clearly sensationalist and its power to shock and move is significantly enhanced. Society all too often tires of the constant dos and don’ts and ifs and buts that scatter environmental-focussed media. While this clip is set within a broader context of wrong, the typical viewer sees this more as a platform from which the atonement can be made, the elation of which has a far greater ‘watchability’ factor and has allowed its circulation around the internet.

Humans are causing the loss of animal habitat on a global, catastrophic scale. The consequences of this are copious and, in many cases, the scale is so immense that it is impossible to gain the footage required to truly give a sense of the damage done. Equally, there are schemes worldwide that are successfully countering this destruction, and, while they may not all be able to produce the easily relatable smiles and embraces of the chimpanzees to illustrate their triumphs, their impacts are not to be undervalued. It is correct that the net impact of human influence on animal habitat is major destruction, but when we scale up the joy of that one, individual chimpanzee that was so visibly moved by its release, we find that the mosaic of individual species protected by human interference is colossal. When doused in horrifying statistics of rainforest destruction, ocean acidification and desertification (to name but three environmental crises), it is all too easy to give up hope. Yet if every individual animal saved brings even a fraction of the happiness so visibly felt by those chimpanzees, then we can make a staggering difference. Every little helps, and we should take heart in that.