The Mafiosi and the refuse mounds: How a Neapolitan crime family contributed to a rubbish crisis

Elizabeth Ferns in Environment on 22 October, 2011. 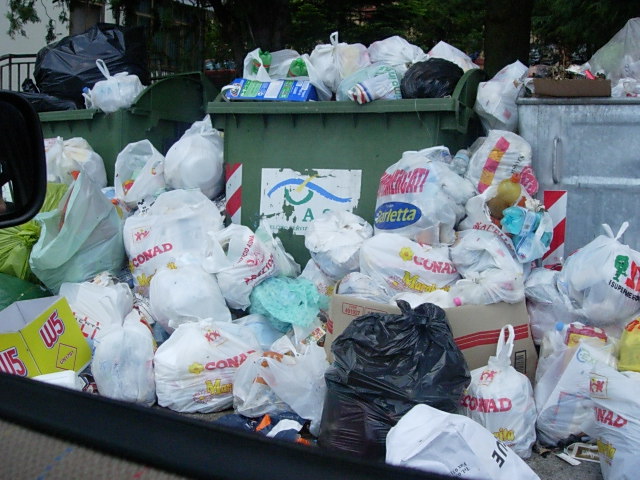 Strikes in Naples left 200,000 tonnes of rubbish uncollected by January 2008.

The Camorra: an infamous part of the Neapolitan Mafia.

Emerging in the power vacuum in the years between 1799 and 1815, there are reputedly five times more members of the Neapolitan Camorra than in the entire Sicilian Mafia. They have made Scampia a world centre for drug trafficking, raking in 500 million Euros a day: the largest drug turnover for any single gang in the world. 4000 deaths over the last thirty years can also be attributed to this crime family (that’s one every three days!).

Refuse disposal is perhaps not something you would immediately associate with the Mafia, but across the Mediterranean there is a clear link between waste and organised crime. The Camorra have had an increasing role in garbage disposal in the region of Campania since the 1990s, gaining massive profits through dubious contracts and by offering unscrupulous private businessmen significantly cheaper prices for waste removal. The toxic waste managed by the Camorra, for example, would collectively form a mound 14,600m high: a staggering amount. Often refuse is mismanaged, dumped in a way that contaminates the surrounding area or endangers public health. Heavy metals, industrial and household waste are mixed together and dumped near roads or burnt, leading to soil and air pollution. The incidences of cancer and poisoning in the areas where the Camorra manage waste have increased by 20%, and have earned this area the title: “Triangle of death”. The contamination of soils and the unregulated release of toxins such as dioxins in Campania can also pollute local produce, which includes Buffalo milk and Mozzarella. In March 2008, a significant amount of tainted produce had to be recalled by the Italian government due to high levels of toxins likely to have been introduced through the animals’ feed after toxic waste was dumped on the agricultural fields where it was grown.

Often corners will be cut, and even the most morally abhorrent actions taken to reduce overheads. For example, in Gomorrah: A Personal Journey Into the Violent International Empire of Naples’ Organized Crime System, Roberto Saviano reports incidences where children have actually been paid to drive rubbish trucks, as older truck drivers refused to drive under the extremely hazardous conditions present at the Camorra’s dumping sites.

The Camorra have also been blamed in part for the Naples waste management crisis of summer 2008 due to practices whereby refuse is illegally imported and dumped in landfills, causing them to quickly become overfull. This practice is known to occur by Italian officials. For instance, the current president of the Italian republic, Giorgio Napolitano, has stated: “It is sure, not only in civil life but also in parliamentary areas, that a systematic toxic waste transfer from Northern Italy factories to Campania, was committed with the active co-management by the Camorra”.

The Naples waste crisis stemmed from solid waste landfill sites becoming so full by Dec 2007 that municipal workers refused to pick up further material. By summer 2008, rubbish was beginning to accumulate on the streets of Naples. By January 2008, 200,000 tonnes had remained uncollected, “the reeking mountains driving away tourists”, according to TIME magazine. The crisis only officially ended in September 2009 when the new waste commissioner, Guido Bertolaso, ordered the opening of new incinerators and landfills. However, thanks to the Camorra and despite these efforts to clean up Campania, the sides of many roads remain regularly used illegal dumping grounds, and the illegally imported garbage of the Camorra means dumping in these landfills is uncontrolled. Additionally, there has been much protest about Bertolaso’s methods, particularly his recent plans to build a 3 million metric tonne landfill in the Vesuvius national park at Terzigno. Tensions have grown and some landfills have had to become militarised due to determined protests by inhabitants who fear the odours from the proposed dumpsites will impact local businesses and property prices.

It is shocking that Naples, an affluent urban centre, and the largest producer of garbage in the world per square metre doesn’t have an infrastructure for dealing with this waste. Landfills are a temporary fix when dealing with this incredible volume and with the Camorra, a seemingly unshakeable influence on the area, continuing to dump dangerous materials to this day, it does not seem like this problem will quickly be solved.