The Joys of the Humble Pond 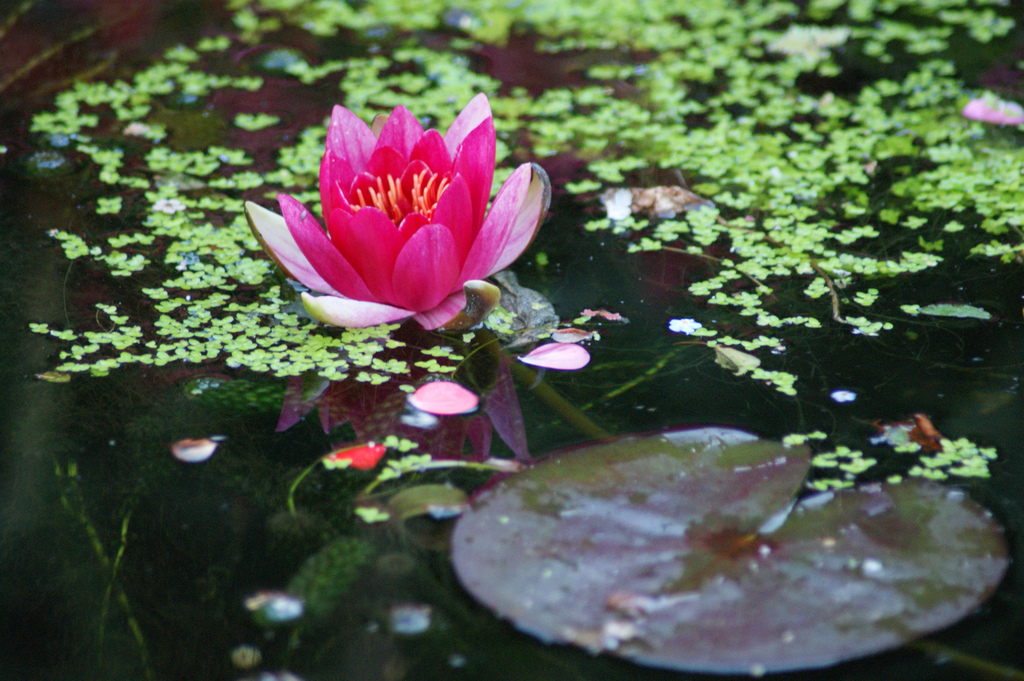 A pond can immediately transform your garden into a thriving ecosystem.

My parents, unlike me, are complete and utter friends (freaks) of nature. They spend hours at a time carefully tending to our admittedly rather beautiful garden, encouraging the birds and the bees to enjoy our bounty.

I am not so cold and dead inside to not feel some joy at the sight of the multitude of colourful flowers and trees and well-kept lavender bushes. But largely due to my being a soulless and cynical city-dweller through and through, not to mention being allergic to practically everything green – the dreaded hay fever curse – I prefer to view the garden from the safe proximity of the conservatory.

I have tried each year to go outside and encourage myself to truly appreciate the picturesque greenery. All attempts to experience the wonders of nature have, however, ended in disaster and streaming, red eyes.

The pond in the centre of the lawn – although considering the size of it, it is difficult to call it a lawn – is the pièce de résistance of the garden. It is surrounded by blue flowers, and is the hub of activity for all things not particularly cute or cuddly.

Each year, my parents become utterly obsessed with caring for the various species of newt and frog that populate the pond, and urge me to rejoice with them as they mate and spawn and reproduce in their hundreds. Female frogs can spawn as many as 4,000 eggs any time between December and April, depending on how warm the weather is and due to the fact that we had an unusually warm Spring, I returned home just in time to observe this slightly unsavoury phenomenon.

Beneath the surface, a pond’s ecosystem can be surprisingly fragile. It is actually a complex interdependent system of fish, plants and other pond-dwelling creatures. Rather than simply being a random bunch of amphibious and fishy life forms co existing in a murky, watery environment, a successful pond will be a delicately balanced combination of clear water, weeds, stones and compatible fish. Get the balance wrong, and you could end up with a load of mushy, withering greens and floating fish dead from oxygen-deprivation and/ or disease. Even I wouldn’t want that. 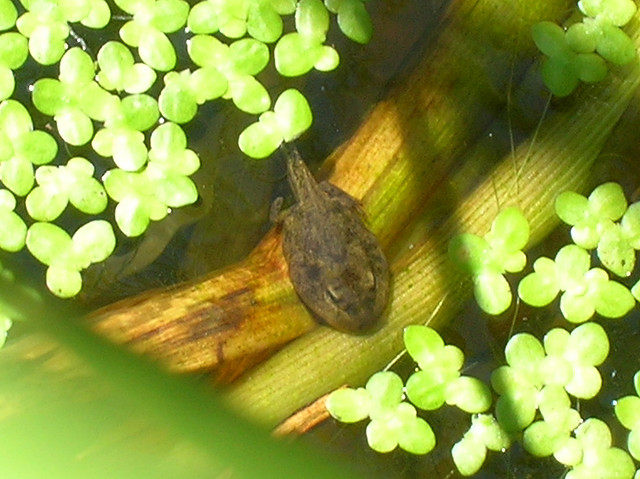 Tadpoles are threatened by many predators, including Newts, making it difficult to encourage wildlife diversity in the pond.

If GCSE Biology taught me anything, it was that the natural world comprises of a series of complicated, interlinked food chains made up of producers, consumers and decomposers. These three elements are crucial to the success of any ecosystem, no matter how big, small or man-made, and a pond is no different.

In addition, these three links in the food chain must be in perfect harmony so as to survive in the four different habitats that can be identified in a pond. Our pond is shallow enough to permit sunlight to reach the organisms living in the bottom habitat, such as insects, earthworms and snails, and is shaded enough to allow other creatures to dwell on the shoreline.

There are enough water plants to oxygenate the open water habitat, but not too many as to obscure the surface film, upon which water striders and other floating organisms need space to roam. To protect the inhabitants of the pond from sneaky predators, such as birds or the neighbour’s cat, Ernie, Mum and Mick can be often found standing guard over the pond, poised to scare them away.

In their efforts to further populate the already teeming pond, my parents thought it would be a wonderful idea to introduce a whole new species into the mix. As it happens, newts and frogs do not co-exist well, as newts tend to enjoy feasting on small frogs and tadpoles. On average, it is estimated that only five out of every 2,000 eggs will survive to become adult frogs. When newts are thrown into the equation, this survival rate therefore lowers dramatically. Their attempts to integrate the new newt population with the indigenous pond frogs have been valiant, if a little desperate at times. 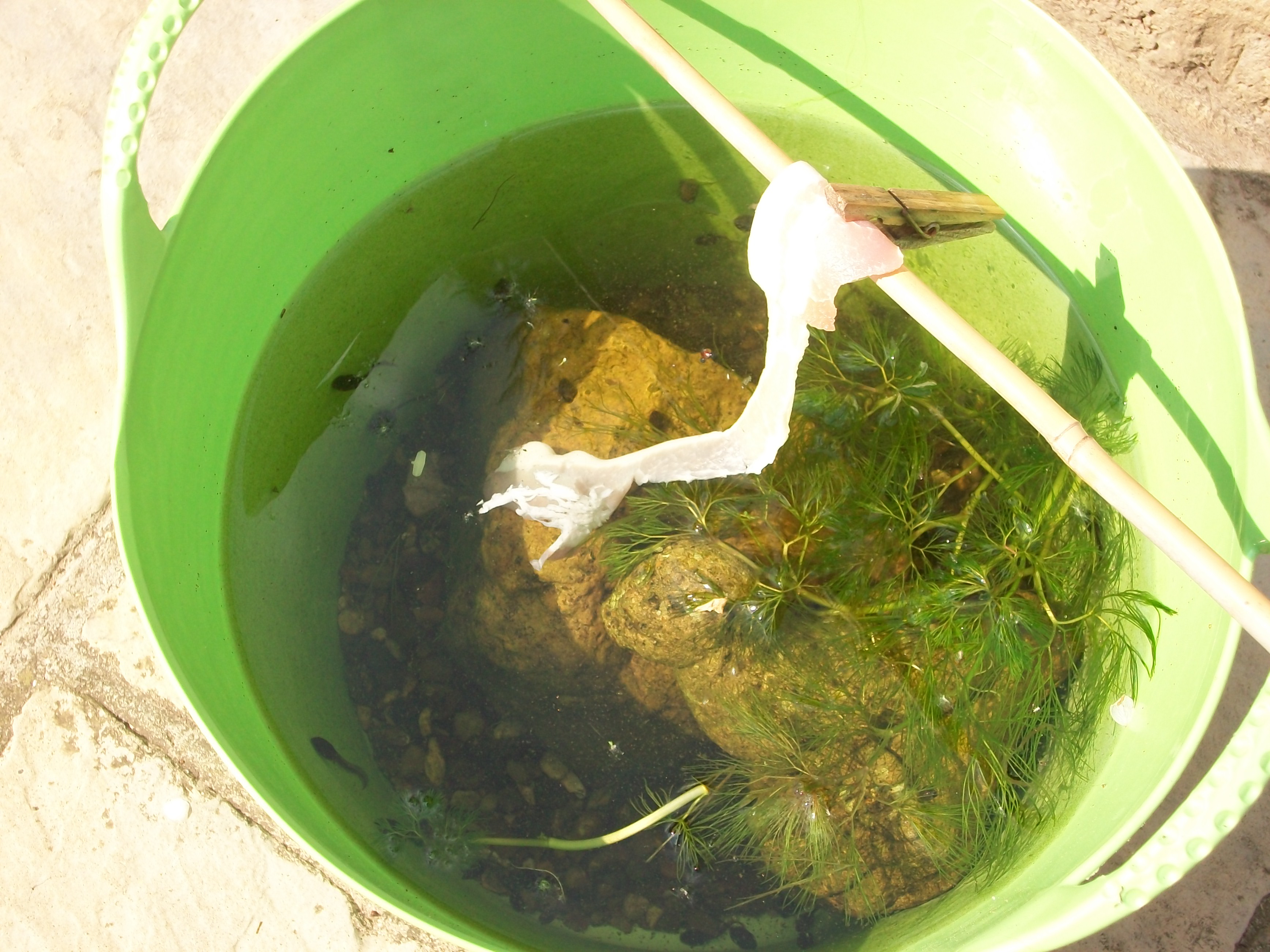 Armed with their new-found knowledge that frogspawn is a particular delicacy in Newtville, Mick drove to Home Base and bought a large bucket in which to deposit the vulnerable frogs’ eggs. As they hatched into tadpoles – a process that can take around thirty days or so – we began to notice a number of enterprising young newts greedily eyeing up the bucket of culinary delights, and Mick even found one had managed to break into the tadpoles’ birthing pool. Needless to say, that newt went hungry, and the bucket was moved towards the rear end of the garden.

My parents’ love for the pond took a new turn when they discovered how tadpoles enjoy, rather surprisingly, a nice bit of streaky bacon. To my utter dismay, when I came down for breakfast one morning, I found that the lovely, Waitrose bacon I had assumed was for my breakfast was being hooked onto a stick of bamboo and hoisted over the tadpoles’ new home. After being displaced from their home environment by the insatiable newts, it appears as though the tadpoles have now begun to encroach on my territory: the fridge.

If this continues, I may just have to introduce them to my good friend, Ernie.