Tobias Thornes in Environment on 1 February, 2014. 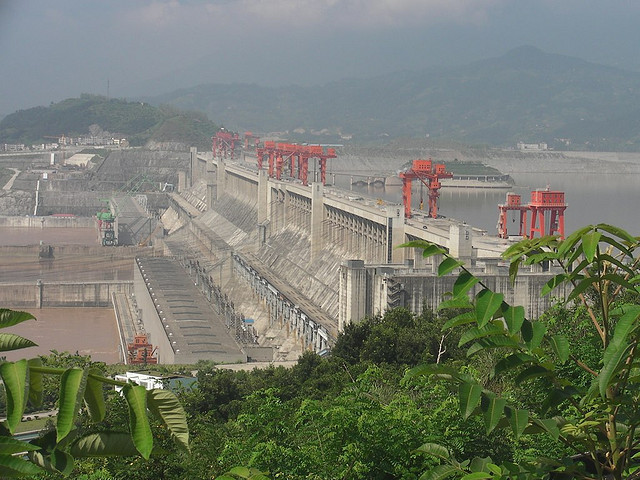 A Vision of the Future? China’s Three Gorges Dam is the largest hydroelectricity plant in the world, generating 18GW of power.

No plumes of smoke, no greenhouse gas emissions: just clean, green electricity flowing out from our myriad rivers and streams. Such is the hydroelectric dream of energy generation.

Hydroelectricity is by far the most widely-used of all renewable energy technologies, currently accounting for 16.1 per cent of the world’s electricity production, which amounts to some eighty per cent of all renewable generation. It takes advantage of the huge amount of gravitational potential energy that is converted into kinetic energy by our rivers to produce anything between a few kilo-Watts to 18 giga-Watts (in the case of the Chinese Three Gorges dam) of power at a single plant. Furthermore, analyses suggest that there remains a huge potential to extract more of this energy from as-yet untamed rivers, implying at first glance at least that, as we struggle to create a new technological world capable of producing more electricity but in a more sustainable way, hydroelectricity could become a much bigger part of the energy spectrum. But hydroelectric generators are far from ecologically inert, and political disputes abound when it comes to damming rivers that would otherwise provide water to ecosystems and human populations. So to what extent can the dream realistically become reality?

Deep in the Democratic Republic of Congo lie the Inga Falls, the largest waterfall in the world. Here, the 96m drop is already exploited by two hydroelectric power plants but could, under plans to exploit its full potential, generate 40 GW of power. This would not only provide electricity for the countries funding the project – the Democratic Republic of Congo and South Africa – but have capacity to spare for Nigeria, Egypt and even Europe via Spain. Long transmission cables will be required to supply population centres with the generated electricity, making the project less efficient than more local energy generation schemes, and little of the energy is expected to be accessible to the local Congolese poor. But what marks this project out as particularly promising for a renewable, sustainable future is that the volume of water flow on the Congo here is so extensive that no new reservoir need be built. If constructed and operated considerately, the dam is likely to have minimal impact on the natural ecosystems of the area and the people that depend, directly or indirectly, upon them.

Such is not the case with most hydroelectric projects, however. In most cases, plants require the creation of reservoirs to supply a steady, rapid flow of water, which unavoidably flood the local area and disrupt the river’s downstream flow, causing huge disruption to local ecosystems and human populations. Creating the Three Gorges Dam reservoir in China required the displacement of 1.3 million people, and it has since been beset by extensive pollution problems. It is doubtful that, even were electricity to be supplied to the local inhabitants of areas affected by similarly disruptive damming projects, this would represent an overall improvement in their lives, since they should lose their homes, local environment, and way of life.

In the richer world, democratic procedures would, we might hope, prevent the implementation of projects threatening to disrupt the lives of large numbers of people. But ecological considerations are still important: it is not sensible to destroy the habitats of species of birds, fish and other animals, which have already in many cases been driven to the periphery of their former ranges by human activity, by constructing hydroelectric or tidal generation plants in areas as sensitive as, for example, the Severn estuary in England. Electricity, even could we not procure it by other means, is not as essential to us as river habitats are to other species, nor does it contribute to our well-being so greatly as those species themselves do as part of the ecosystems upon which we ourselves depend.

Thus, if we are to learn from the damage done by taming rivers in the past, we should not build new hydroelectric plants that would endanger the wellbeing of human populations or the survival of other species. Yet still there are plans afoot to increase capacity, in India and China in particular, to potentially catastrophic effect. Unsurprisingly, they have provoked storms of political protest. Billions of people and countless species of plants and animals depend on the huge rivers of the Tibetan plateau for their survival, and competition for control of these cross-border resources is increasing as local populations grow and industrialise.

The signs are concerning. One report exposing the potential for intense damage to forest ecosystems from the Myitsone dam on the Irrawady through China led to suspension of its construction. The four out of eight planned dams that China has already constructed on the Mekong appear to have lowered river flow so greatly during the monsoon that saline seawater has begun to penetrate far inland, destroying the rice paddies of Vietnam and fisheries of Cambodia, which lie downstream of China. Meanwhile, Chinese plans to dam the Brahmaputra for hydroelectricity have come into conflict with Indian ambitions to draw off water for its ever-growing population. Bangladesh, which relies on the river for two-thirds of its water supply, could lose out under either scheme. Hence, whilst countries such as India and China have a huge theoretical potential to increase their hydroelectric output – China estimates that it could produce 500 GW, of which only 200 GW is currently exploited, whilst India might potentially increase production fourfold – the human and environmental costs that would be brought about by this increase are so great that most proposals are mired by political conflict.

Moreover, hydroelectricity is not necessarily particularly reliable. India witnessed blackouts in August 2012 when poor monsoon rains failed to drive the hydroelectric turbines at full capacity, and plants work best on rivers with year-round steady flow, a circumstance threatened by climate-change-induced heating that will increase river flow in the winter and decrease it in the summer. At full capacity, with all potential sources exploited, hydroelectric generation would still fall far short of current, let alone future, global energy demand. Sacrificing much-needed water, homes, land, livelihoods, habitats and species for the sake of a limited and unreliable method of energy generation is surely not a feasible way forward.

So, whilst existing hydroelectric plants will continue to provide the world with a far from negligible contribution to its energy portfolio for the foreseeable future, total global output is likely to see only a moderate increase, brought about by implementing schemes with minimal environmental and social impact and improving the efficiency of existing infrastructure. Within the UK, the outlook for improvement is slightly better. Only around 1.5 per cent of electricity was generated using hydroelectric plants in 2011, and most feasible sites are already being exploited, but studies suggest that between 800 and 1600 MW of extra hydroelectric capacity remains to be sustainably extracted, a 50–90 per cent increase on the current output.

This is largely because, with modern technologies, smaller sites previously regarded as uneconomical can now be tapped, with environmental impacts minimised through the use of fish gates and similar techniques. Any new sites would have to build on existing ‘Old mill’ weirs and dams rather than disrupting pristine stretches of river. If we consider it worth the infrastructural outlay, the UK can therefore be expected at most to double its hydroelectric output, bringing it to 3% of our current electricity consumption. This reality might not quite mirror the hydroelectric dream, but this often-forgotten renewable technology is set, nevertheless, to have an important part to play in a less energy-intensive future world.