The Art of the Activist

Tobias Thornes in Environment on 9 February, 2013. 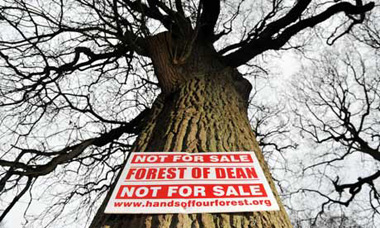 Not for Sale: Environmental activists helped save our forests. Can they save our society?

Things cannot go on as they are. A fear is brooding over the planet, a foul taste hidden within the falsely sweetened air. For beneath the layers of artificial comfort and Ozymandian monoliths we have created for ourselves and called ‘beautiful’ and ‘mighty’, the precious foundations of our civilisation are slipping away. We can see them tumble, as rafts of ancient ice collapsing into a greedy sea that slowly laps ever higher onto our cultured shores. Yet, though we can see the darkness before us, the world seems too complex a place to simply change the path we are on.

It is no wonder that most of us, for most of the time, prefer to forget or deny the reality of the pending situation, and leave the complicated calculation of how each of us should act to avoid destruction to another time, or other minds. There are simply too many variables – too many people with too many diverse needs and too many factors affecting the wellbeing of each and every one of them – to perceive a clear solution to our environmental and social troubles. Thus, these most important issues can find themselves swept under the carpet, deferred whilst simpler short-term problems hold the limelight.

This is where the activist comes in. Urged on by a pressing issue – be it social, environmental or both – that threatens to dramatically affect their personal way of life, the activist can bring home to all of us just how great an impact seemingly innocuous decisions we make and activities that companies or governments pursue can have on other people’s lives and on the environment we all share. Short-term gains are swept aside as the long-term repercussions of our actions are brought home to us by the sheer passion with which activists, denied control over an aspect of their world that is important to them, feel obliged to make a stand against the status quo.

Often, the causes to which activists draw our attention turn out to be of great concern to the public as a whole. Suddenly, we are made aware of the fact that something we treasure is, without our realising, under threat, usually from the actions of governments or businesses wedded to the steamroller of economic growth. Take the case of the nation’s forests. In autumn 2010, the government announced that it planned to sell off the forests to private owners in the hope of raising a profit. By doing so, it would have undermined the protection of one of society’s most important assets, putting the wellbeing of the people of Britain below the health of the economy.

They were forgetting, as so often before, that the economy exists only as a tool for the furtherance of that wellbeing, not as an end in itself. Once we, the general public, were made aware through the work of committed activists such as 38 Degrees of exactly what the government’s proposals entailed, general outcry ensued. Were it not for the voices of those activists rallying us from our day-to-day distractions and reminding us of what is truly important in our lives, would we have put a stop to the sell-off before it was too late? The situation is similar with the NHS. The government may still be trying its hardest to destroy this most vital, world-renowned service, but thanks to pressure from activist groups its privatisation plans have not passed by unnoticed and have been beset by delays at the worst, revisions at best.

It is on environmental issues, though, that activists have been most important over recent decades, these being seemingly the easiest to ignore when profit is put before people. On 16th February, activist, campaigner and environment writer Derek Wall will come to Durham to give a talk on his experience of the green movement and the direction in which he feels green politics and green activism will move in the future as we grapple to create a more balanced and sustainable society. One of the campaigns Derek has been most closely connected to was the anti-roads ‘Earth First!’ movement of the late twentieth century. In the 1970s, greedy for perceived economic advantages offered by faster road-links between the country’s cities, governments sought to begin motorway construction on an unprecedented scale. Through the protests of activists, across the country this road-building programme was slowed and limited. Certainly, many motorways were built. But by drawing the country’s attention to the problems of the car, which had been allowed over the preceding decades to have more and more of an influence over the layout of our cities and countryside, the activists were able to bring about a shift in public perception, from a widespread acceptance of motorway proponents’ arguments to a realisation that tarmacking over our land for the sake of faster but more polluting travel and temporarily reduced congestion was not necessarily beneficial.

Some were opposed to the car in general, feeling hurt by the pollution of all kinds emitted from these ever more prominent machines. Others simply drew our attention to their own plot of land – their own home or treasured wildlife haven that was threatened by the new roads. But all provided through their protests the means to hear more than one side of the story, and the chance for the public to question the orthodox capitalist view.

By largely ignoring local protesters, the motorway-builders did in many cases win out over the lovers of landscape. But we must not allow this fact to fill us with pessimism about the power of the movement. Wall points to the 1880s as the beginning of green activism in this country, and from then onwards the call for the protection of our heritage against the bulldozers of capitalist short-termism has only grown. Since the seventies, protests based on first nuclear disarmament, then ozone depletion and now climate change have brought together increasingly large assemblies of the population to stand up for our basic needs – the natural habitat into which we evolved and the means to produce food and collect clean water – against the industrial expansion for the sake of economic incentives alone that threatens to undermine the provision of such essentials.

So, it is with hope that we should look to the future, always keen to open our eyes, ears and minds to the revelations that otherwise ordinary people are increasingly making about just how distant our ‘developed’ urban society is becoming from the natural environment and spiritual fulfilment. The climate change protests we saw last year are the latest blossoming in a processes of awareness-raising that, though it has not prevented industrial expansion over the last few decades, has slowed down and mitigated some of the worst effects that this development might otherwise have had. Areas of greenbelt have been saved by activist groups such as ‘Earth First!’, once lost species have been brought back to the British Isles by nature conservation groups and many of the country’s most iconic buildings, straddling our landscape for hundreds of years since their construction in more innocent times, have been saved by groups such as the National Trust.

All these groups have grown, and continue to grow, since the early days of the 1880s. Law-makers follow the will of the people. It is hence from the activists that stir those people that our hope primarily comes, that those black clouds looming over us will eventually recede, and that we as a society will come to eschew growth of the materialistic kind and instead embrace the growth of spiritual fulfilment and wellbeing for all, in tune with nature not against it. Activists may seem somewhat eccentric, passionate but powerless on their own. But it is to them, who are spurred into action by the repurcussions of the policies of our society on the most basic and individual levels, that we must look if we are to find the way forward into a brighter future.