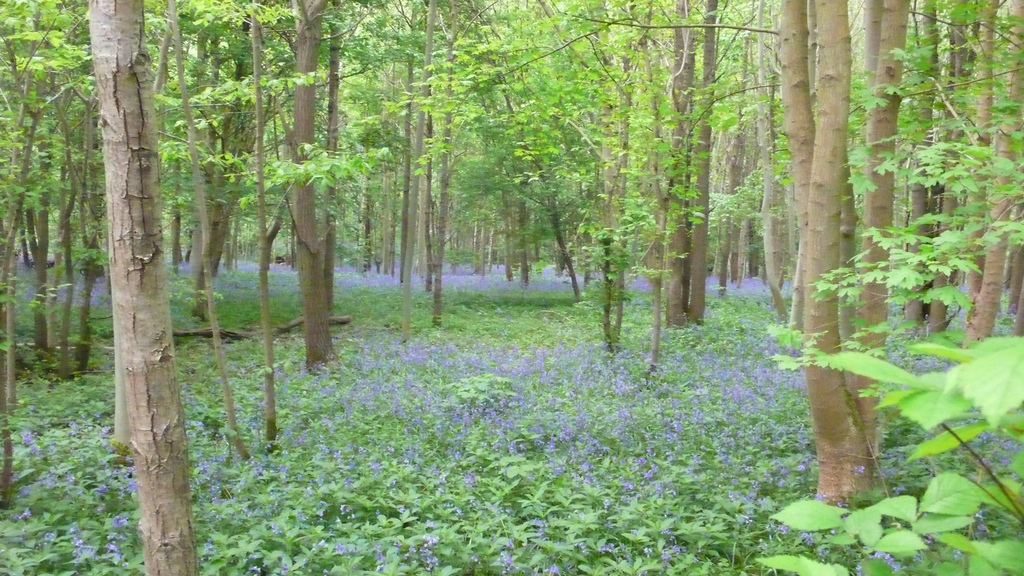 The bluebells wane as summer approaches, and the forest reaches the height of its splendour.

After the long, harsh bareness of winter, now at last the forests and woodlands of England have put on their verdant, luscious summer coats. The far horizon, so recently a picture, bleak and stark, composed of matchstick outlines, now exhumes a radiant glow of green. Nature provides no more uplifting sight than this, the welcome reassurance of life returned as birds and flowers flourish again beneath the shady boughs. In the aptly-named Bluebell Wood those enrapturing flowers that in the latter days of spring bejewel the forest floor with carpets of their brilliant hue now begin to fade, another season passed, as the summer days begin. The first day of June: the first note of that delicious harmony that entwines the summer months in the countryside.

We have always had a close relationship to our woods, the remnants of that great primeval forest that long ago from shore to shore enveloped the land on which we have built our fields, settlements and civilisation itself. They are at once the givers of life and the harbingers of darkness and secrecy, scattering the bright light of day into shadows of gold, green and grey. In these places there have always been special customs: the wild places of the country, from which man’s imagination could still conjure up phantoms of good and ill intent, shrouding the lofty boughs with fear as much as admiration. In medieval times these places often remained the direct property of the king, part of the ‘Royal Forest’, where with his permission only could animals be hunted and wood be cut.

But slowly, through the centuries, the extent of actual forest dwindled, even as the crown sought to extend the official borders of these profitable lands, where fines could be levied for all sorts of infringements. By the fourteenth century many were calling for the boundaries of the king’s ‘forest’ to be redefined in light of the cutting down of what had been woodland to leave farmland that nevertheless fell still under the direct jurisdiction of the monarch and the strict Forest Law. A ‘perambulation of the forest’ carried out under Edward I saw the boundaries of the forest areas officially shrunk in 1300, and was key to the king’s maintaining the support of the barony at a time of financial difficulty. The forest was again at issue at the time of the Civil War, when it was claimed that King Charles was profiting too handsomely from these rich areas of land. Indeed still today we regard the forest that remains not as the property of private individuals, but as an important national asset managed by the crown – nowadays, through an elected government – as a vital resource for our collective experience. The response to the current government’s plan to sell off the nation’s forests in 2010 was far from enthusiastic, after all, and the notion was abandoned because of the widespread condemnation. The city politicians had to be made to understand that our forests have a value to our society much greater than their monetary price.

For forests are important, to our own health and well-being as well as to that of the abundant species that thrive within them. Rainforests are often termed the ‘lungs of the world’, and the same applies on a smaller scale to our own woodlands, which represent, after all, simply the largest and most prominent mutations of the plant kingdom to grace our shores. It is such mighty beings as these that maintain our planet’s biosphere, to fill it abundantly with the reactive, once deadly oxygen upon which modern life-forms depend more immediately than any other resource. But it is aesthetically and emotionally that forests are unique in what they provide. Even where they are managed by humanity, woodlands present to the eye a wilder and more natural sight, far richer than any human work of art, than can be found elsewhere on the landscape. In the hush beneath the trees, protected from the wind and from the sights and sounds of the busy, sometimes unrelenting world of man, it is possible to forget the cares and preoccupations of the outside world and find freedom in their shelter. After all, the trees care nothing for all the fears and desires of day-to-day life, living out their decades- or centuries-long existences slowly and steadfastly while the less patient world turns without. Waking in spring and falling asleep again in autumn, their seasons pass like days, bearing no greater purpose for them than simply to live, bear leaf, and die.

But it is the forest’s indiscriminate nature to hide what lies therein, both good and bad, that has given rise down the centuries to the many myths and legends that surround it and its inhabitants. Bluebell wood was supposedly the hide-out of thieves in the eighteenth century, and it was there that the Oddingley Murderer was thought to have fled and hidden having carried out his brutal act in the broad, sunny fields of June 1806. Nearby lies another pocket of the ancient forest, Feckenham Forest, where King Charles I is rumoured to have hidden as he fled the parliamentarians in the civil war. Woods have served as inspiration for many fictional accounts of dark and light: think of the wild woods in Wind in the Willows or the many acts of chivalry and misdemeanour that occur on seldom-ridden paths through the mysterious ancient forests of England in the legends of King Arthur. Most famously of all, of course, are the merry men of Robin Hood, who find concealment amongst the trees of Sherwood and thereby make their brave attacks on the rich and unscrupulous who nervously pass that way. These stories must be rooted in the true feelings that the people of England harboured in centuries past, regarding forests as places of danger as well as refuge.

So, this summer, perhaps we should all, for a while, shroud ourselves in the ancient world of the forest and perhaps glean inspiration and refreshment from the wild kaleidoscope of life therein, surviving still to a greater or lesser extent in almost every area of the country. Look and listen closely, and you may see signs of the abundant life that survives, unhampered, there: a cuckoo calling from some hidden high place, a badger’s set or fox hole concealing these enticing creatures, not beloved of farmers, that have survived despite the growing urbanisation of the modern world. It is comforting to think that such trends towards bland urbanity may not only move in one direction. There are increasing calls for a ‘re-wilding’ of Britain, reintroducing untamed areas of forest and species that have been lost since the intensive industrial techniques of the twentieth century put pay to life that used to thrive on farms and in thickets alike. If we cherish still something that has been at the heart of the human experience in England and around the world since time immemorial, surely we can only regard this as an essential step: a rebuilding of the true city of splendour that covers our landscape, the city of green that is the summer forest.

Durham County Badger Group have recently published a range of free educational resources on their website. For more information about badgers and their habitat, visit them at http://www.durhamcountybadgers.org.uk/ .