On 17th August 2019, Rosie Watson set off on a journey from the Lake District to Mongolia. Instead of taking the nine-hour flight, she decided – inspired by a lifelong passion for running and the environment and having pledged to commit to #flightfree2020 – to run the 12,000km distance. Having made it as far as Bulgaria, the trip was cut short by the Covid-19 pandemic, and Rosie is now back home in the Lake District, continuing to share stories and adventure tips on her blog, ‘The New Story Run’.

Did you find that attitudes towards climate change and its severity changed from country to country? Were certain issues prioritised over others depending on where you were?

Yes, definitely! In the Netherlands, people seemed to associate it with the government, taking a non-urgent ‘the government will look after us’ stance, which I found strange for a country so likely to go underwater – something which was never really discussed! Germany was also very technology focused and didn’t feel as green as you might think. As soon as I got to Croatia and further east, people began to speak less about the climate crisis and more about waste and recycling, as although it’s not the biggest issue they’re facing it’s the most immediately obvious.

My main observation is that Western European countries aren’t the leaders they think they are. We are the most destroyed area in terms of biodiversity and a total lack of big wild spaces! For example, Western Europe now has cleaner air due to laws surrounding car emissions and efficiency, but all the old ‘dirty’ cars were dumped in Eastern Europe and sold cheaply there, increasing their pollution levels.
It’s obvious that people in Eastern Europe are badly impacted by the effects of the climate crisis, for example the economic impact of lack of snow in winter causing droughts in summer as lots of people rely on farming for money and/or food. I really noticed the injustice of this as Western Europe was one of the main contributors to the climate crisis in the first place – although this wasn’t something people brought up, so a bit of a tangent from your question!

Do you have any further climate activism plans for once you return to the UK, or are you just looking forward to a bit of a break?

Just catching up with writing about the people I met, writing for a few other places, training, and planning the rest of the trip. There is loads to do just regarding the trip as it stands, so I will focus on that and doing some paid work to save money as well! I will hopefully do a few smaller training adventures too, maybe some of the long trails in Scotland! 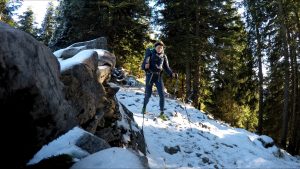 My favourite section was Croatia in January. The sea and mountains are incredible and the trails are stunning, so that combined with lovely people, beautiful weather, and it being super quiet and cheap at that time of year made it much nicer than in the busy, hot summer!
Crossing the Alps was most challenging. There was an early snow dump that cut off all the trails, so I had to walk along the side of main roads all the way over. It was really horrible in lots of ways: hard on the feet and legs, infuriating because of the traffic, freezing but too expensive to stop in many cafes, and eye-opening to see how commercialised it is, something I’d never noticed when I’d been on holiday as it’s easy to get straight up into the mountains.

How was it having Mike Elm join in with the challenge?

Great! It’s the perfect balance as I still have my solo adventure but it’s also comforting to know I’m not totally alone, and fun to share stories. It’s also useful to be able to brainstorm together and give each other feedback on writing. We meet up for rest days when we can – sometimes every week, sometimes just once per month – but other than that we are doing our own thing. And we are a couple, so obviously it’s just good to see each other! 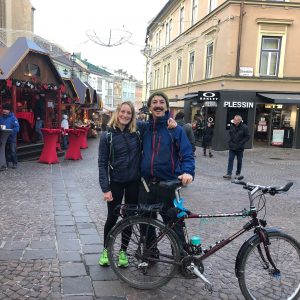 What has been the most inspiring environmental story that you’ve come across?

It’s very hard to pick one! But the story about Jovana was a really fun one to write and learning more about the amazing biodiversity in Montenegro and the Balkans in general was really inspiring. They also seemed to have a very positive, relaxed, happy culture there, and despite the Balkans having a lot of issues – recent wars, large scale corruption, not much money – on a day to day life level, everyone was so warm, friendly and connected to the important, simple things.

Other favourite stories include the one about the future of skiing in the Alps, learning about Ecofeminism in Kosovo (guys AND girls should be interested in this!), and the one about a cool hotel in Slovenia!

What’s your most pressing concern about the environment now, and what can people do to reduce their impact?
Everything needs to happen much faster! The most useful thing to do is get involved politically: go to protests, use your vote and think carefully about who to vote for, and pressurise the government to take things more seriously (e.g. writing to your local MP), as well as pressuring businesses to change and not supporting fast fashion brands and factory farmed meat. Putting pressure on other institutions, such as getting universities to divest from fossil fuels or accommodation providers to switch to green energy is also important. The things you can do on this level are much more important than individual lifestyle decisions like what toothbrush you buy, but committing to #flightfree2020 (or 2021), reducing your meat & dairy consumption, and trying to cut consumerism are also good starts on a personal level. Don’t sweat the small stuff: if you want to do just one thing with a big impact, being a body in a crowd at a protest is a brilliant thing to do (and fun)!

To find out more about Rosie’s trip, read Part 1!