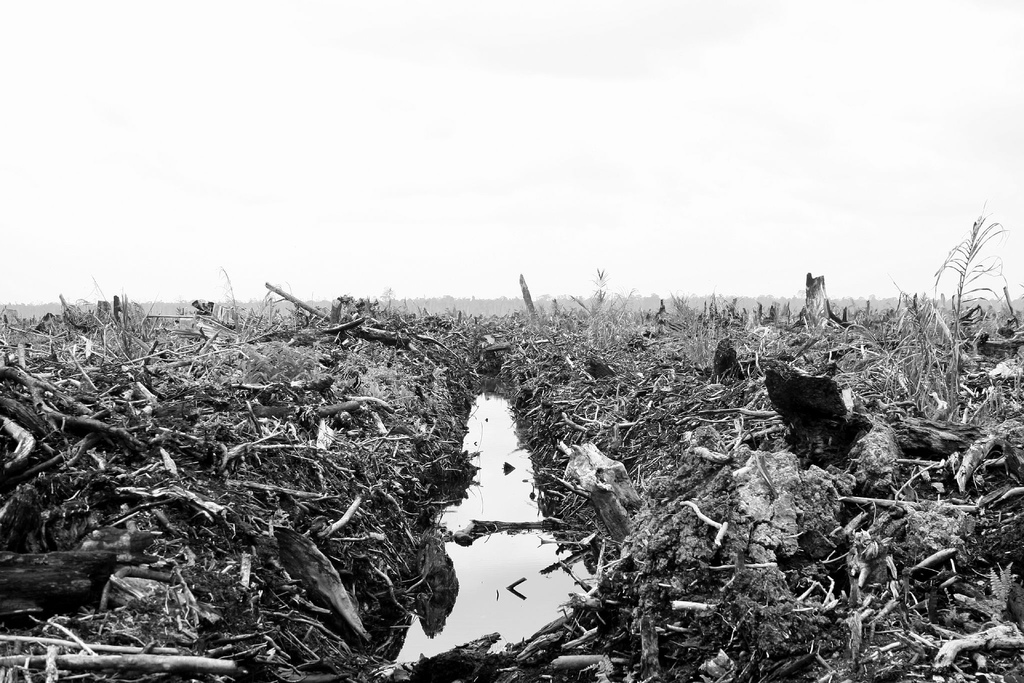 Once pristine forest, more and more of the Indonesian paradise is falling victim to slash-and-burn land clearance, pouring plumes of smoke across the region.

Straddled between Asia in the north and Australasia in the south, between the Indian Ocean in the west and the Pacific in the east, stretch the richly forested islands of the world’s sixteenth largest country, Indonesia. This magnificent land, untouched by industrial pollution and destruction until recent decades, hosts the second greatest extent of biodiversity of any country in the world. When the naturalist Alfred Wallace visited during the nineteenth century, he described a fascinating dividing line between Asian and Australasian species that thrive alike in this hospitable land. But today smoke pours from the once pristine forests, reduced to covering now only sixty per cent of the country they once entirely dominated, as some of the 238-million-strong population exert increasing pressure for land on their environment through illegal slash-and-burn destruction. This month, the smoke output became so critical that air quality in the neighbouring country of Singapore became hazardously poor, the public having to wear masks to go outdoors into air thick with the fumes of a burning paradise.

We can only imagine what a spectacular country Wallace must have seen when he explored the wildlife of Indonesia all those decades ago. The forest was once populated by a wide variety of different tribal peoples, each with their own language and customs, each living out sustainable, small-scale agricultural existences having spent generations adapting to the particular environment in which they found themselves. To this day, there are some three hundred different ethnic groups within the country. For centuries they lived alongside myriad large mammals including tigers, elephants, primates and leopards; hundreds of rare species of amphibians, reptiles, birds and fish; and a huge variety of plants, including 122 species of bamboo alone, across the luscious rainforests and coastal swamps. Such an environment had been perfect for agriculture, supporting a large number of small kingdoms subsisting on the land around them over eons of endemic civilisation.

But, as for so much of the rest of the world, the slow creep of colonialism eventually brought capitalist European culture even to this far-flung oasis of life, and like many countries before it Indonesia is slowly witnessing the loss of its indigenous landscape under the pressures of ‘modernisation’. It was the Dutch who in this case precipitated the erosion of traditional culture with their establishment of the Dutch East India Company and its imposition of plantations on the archipelago after 1830. By no means had Indonesia been isolated from the outside world before this: Islam had spread into the country through trade with Muslim sailors from the thirteenth century, but Islamic culture had merged in with the native customs and technologies. European contact had led to the spread of Christianity during the sixteenth century, but was limited in its scope. By and large, the people of Indonesia had remained contentedly fixed to their traditional ways, living in harmony with the forest and the oceans in an advanced civilisation capable of constructing magnificent temples and ships able to travel as far west as Africa.

Yet this culture was considered primitive in European eyes, and inevitably could not survive long into the age of exploitation that was the nineteenth and early twentieth centuries. The Dutch, greedy to profit from the fertile soils of the archipelago, forced the populace to work on plantations for the production not only of the exotic spices for which it was known but also of non-indigenous crops such as coffee, tea, tobacco, rubber and opium. Several indigenous groups resisted the imposition of Dutch rule, but little by little the country fell under the empire’s industrialising sway. In 1920, the final part of what is today Indonesia was conquered. Meanwhile, the incredible natural environment, which for the native Indonesians had been an all-providing paradise to be cherished, was gradually replaced by the Europeans by the comparatively lifeless monotony of acre after acre of crops for export. Under their ‘Ethical Policy’, the Dutch allowed some degree of native culture and industry to persist, but so far as the ecology of the islands was concerned, the damage had been thoroughly set in motion. The final sting in this tale of colonialist transformation came unintentionally, when European rule dragged the country into the Second World War, which saw the Dutch regime ousted in favour of much more oppressive Japanese invaders. Theirs was a government bent upon the extraction of rubber for the war-effort, on the backs of the Indonesian populace. It is estimated that some four million Indonesians died during their occupation.

So it is that forest clearance for crop production continues in Indonesia. The country may now be independent, but the pressure of population and greed for resources to export to the materialist western world on the part of corporations and individuals, which the government struggles to control, means that slash-and-burn continues to pour smog across the once pristine oceans and into neighbouring territories. Indonesia has condemned the burning, and made efforts to tackle the forest fires, but the sheer extent of the smoke testifies to just how great an uphill struggle the enforcement of preventative measures is proving to be.

It is a situation mirrored, usually on a smaller scale, across so many former colonies of European powers. Once industrialisation has begun, population expansion and the establishment of a foreign capitalist culture reliant on material goods for which native societies living more sustainable ways of life had no need or desire mean that there is apparently no way back. There can be no return to the not always untroubled but at least stable and healthy coexistence with nature’s paradise that prevailed before. The land has been bought by corporations hungry to squeeze more profit from the degrading soils, and needing to bring more and more land into cultivation to do so. The only way forward from the pit of exploitation introduced by the colonialists is further, gradual development into something new. We can only hope that this new future will be one of eventual prosperity for the Indonesian people, and that it comes quickly, before much of the remaining biodiversity is destroyed in the process. The inhabitants of Singapore may have to suffer weeks or months before the smog lifts from their city. For the people, flora and fauna of Indonesia, the suffering brought on by industrialisation may have to continue for many years to come, as inch by inch this green paradise is lost to the flames.