Framing Chernobyl: An Oasis out of Disaster?

Elizabeth Ferns in Environment on 18 February, 2012. 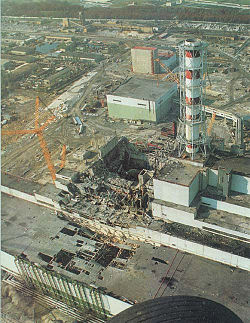 At 01:23 on Saturday 26th April 1986, Unit 4 of the four-reactor complex at Chernobyl exploded, causing steam pressure to rip open the reactor, thus exposing the core to the open air. This threw out radioactive material, and it has continued to do so: a 10-day nuclear accident with multi-decadal implications. The tragedy at Chernobyl had a devastating impact on the local population; 135,000 people had to be evacuated from the area immediately following the incident, many never to return. It is widely accepted that doses of radiation released from Chernobyl caused increased risks of thyroid cancer amongst other diseases, although the long-term health effects of Chernobyl are still contended. It is arguable that increases in genetic anomalies and malignancies in the area may be overestimated, although Greenpeace maintains that up to 9,000 people may die from cancer as a consequence of the accident. The accident released one hundred times more radiation than the atom bomb in Nagasaki, and is still not permanently contained. The 1.1 billion ton concrete “sarcophagus”, which currently covers the reactor site, is crumbling: the roof no longer sealed to the potentially highly irradiated water beneath. A gigantic new safe confinement centre named “The Ark” has been proposed to finally seal the site.

It is perhaps odd that amidst this disaster, and whilst the people of the Ukraine continue to suffer, the accident at Chernobyl seems to have had positive effects on some species populations. Despite increased mutation rates, a contaminated environment, and radiation three thousand times higher than normal background levels, the absence of people in the evacuated area has actually had a hugely positive impact on nature. The wild boar population has grown by ten times, and populations of birds, deer, wolves and rodents have also increased. It will perhaps be interesting to see what effects the new “Ark” will have on wildlife populations: will effective containment cause wildlife around site to thrive further? Or will the disturbance associated with its construction disrupt this new-found oasis?

This account of wildlife thriving in the absence of humans could perhaps be used as perfect ammunition for an argument against our own species. Our terrible habits, and environmentally compromising lifestyles, mean even a horribly contaminated region of the world can support nature more effectively than one with…well us! 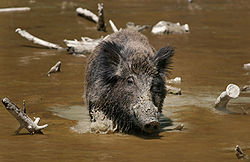 Perhaps, more positively, the story of Chernobyl can be viewed as one of hope, of wildlife’s ability to continue against all odds, and to survive and flourish despite the damage that humans have inflicted: a living representative of nature’s perseverance.

However many would contend this positive framing of Chernobyl. There is still a lack of consensus on the likely long-term effects of mutation as a result of exposure to radiation. Mutations not only impact species directly affected by high radiation levels, but transmission also occurs between generations and adjacent populations. This could result in unforeseen negative impacts further down the bloodline. Additionally some of the first-hand stories of Chernobyl seem to suggest a more severe impact on animals that is suggested by statistics indicating a natural oasis within the exclusion zone. Mykhailo Martinyuk, a lorry driver at a meat-processing factory near Chernobyl (who now suffers with leukaemia as a result of the radiation dose absorbed whilst helping with the Chernobyl evacuation) recounted his experiences to the BBC. The cows he moved around the contaminated area were initially “behaving normally” despite the measured radiation within some cows being up to 60–80 milliroentgen per hour. However after a period of time the cows “did not react to commands. You could hit them and they would not respond”. Clearly this demonstrates that although radiation does not impact the physical appearance of animals, behaviourally impacts have been severe.

Perhaps instead the message from Chernobyl’s wildlife haven is this: even if things appear rosy at the surface, no sarcophagus is big enough to contain the ever-expanding volume of pollution that we produce.

A message for all those dealing with a pre-climate change world: change your habits rather than relying on nature to persevere. An Ark may not save us next time, and to solve climatic change its going to take the involvement of a greater number of people than those brave few who managed to contain the Chernobyl disaster. Additionally Chernobyl demonstrates that you can never really underestimate unforeseen hazards when dealing with something as potentially catastrophic as nuclear materials. Following the accidents at Three Mile Island and at Fukushima, it feels that perhaps this is a lesson that remains unlearned. The minimal amount of CO2 mitigation resulting from a pro-nuclear policy just isn’t worth it. Nuclear energy is not the answer to our present-day environmental problems. It simply intensifies the risk of environmental damage, with little benefit.