‘It’s what’s on the inside that counts’ – is this really true any more? 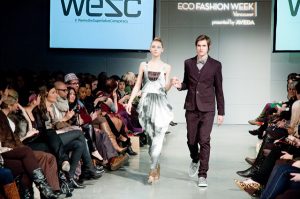 Due to the unstoppable rise of social media, today nothing is beyond posting online; where we go, what we eat, who we’re with. Photos and videos are the way we interact today, via Snapchat, Instagram, and Twitter – even Facebook’s text based system is now overrun by viral videos on autoplay. As a result, we live in a society arguably more concerned with appearances than ever before. It is in this world fashion becomes a dangerous beast.

It must be said that I am no enemy of fashion. Anyone that knows me could not accuse me of being disillusioned with it; fashion done correctly is an art form, and one to be admired. But fashion as we know it today is not. Today, fashion is no longer original but driven solely by profit, and is as environmentally disastrous as fossil fuels; the cost of clothes disposed per year in just America the equivalent of the carbon dioxide emissions of 7.3 million cars (EPA estimate, Newsweek). It’s a high price to pay to be indistinguishable.

There in lies the problem; today’s fast fashion is symptomatic of a society built around the disposable. What isn’t disposable nowadays? We live lifestyles of indulgence, eating for the sake of eating, drinking for the sake of drinking, shopping for the sake of shopping. And after all of it has amused us for a short time, it becomes landfill. But whilst wasting food and vehicle emissions are a topic of hot debate, the damage done by the textile industry is less notorious.

Yet it is fast fashion that perpetuates the notion that both the environment and our identities are disposable. Pictures of us on social media far from represent who we really are – they are but small, carefully selected windows of how we want to appear, helped by the buffeting winds of fashion. One day, we can be a little Gothic, a little Bohemian the next – and when we’re finished with one ‘look’, we can throw it to the back of the cupboard until it slowly works its way into the trash. As Howard Moon in the Mighty Boosh says, a laughing stock: ‘I don’t buffet about on the winds of fashion’; but there’s something in that. Think of those people overly concerned with how they look; strip it all away, and what’s left?

That aside, there is simply no need for such high production of clothing. Big labels will claim that they’re ‘changing seasons’ when they haul all their unsold products into the local landfill site and replace them with new ones every few months, but let’s be honest, it’s not for our benefit – beyond a few seasonal items like a winter coat and flip-flops, I can wear the same clothes year-round, just ‘accessorized’ with leggings and cardigans in the colder months. Besides, as reported by Alden Wicker in Newsweek, fashion label Zara ‘upended the entire fashion game by restocking new designs twice a week instead of twice a season’ – unpredictable changes that may be mirrored in the future climate as well as Zara’s retail rails. 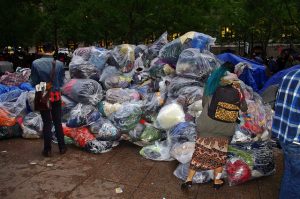 Did they pay 5p for those bags?

And our reward for selling our planet down the river? To be plastered with the names of Corporation giants like free walking billboards, ‘reducing us to replaceable automata within a homogeneous global workforce’ (George Monbiot). We get to value each other according to how expensive the brand name we’re wearing, or whether our shoes match our shirt. These judgements may be unfavourable; but not to worry, much of our high fashion wardrobe will begin to fall apart before we can wear it again anyways.

And if you do stand out? It’s just as well, really, for fashion as a way to stand out seems to have given way to how to fit in. A far cry from the unique, thrifty designs once made using a sewing machine and some imagination, what we wear now is just another product of a mass-production mania; a nondescript pair of jeans using up well over twice the amount of water an average person would drink over 900 days (Greenpeace). Whilst it must be acknowledged few of us have the time (or skill-set) to create lasting clothing any more, clothing manufacturers do; and yet, they still prioritize quantity over quality. On top of that, any hope of recycling natural fibers such as cotton, silk or linen is dashed when they are so heavily chemically treated and dyed – the ‘natural’ aspect of the finished product itself questionable, as is its rigorous chemical treatment when often the product still does not last.

I ask then that next time you’re about to hand another purchase over the counter, ask yourself: do I really need this? Will I wear it more than once? Will it even last? And if you’re above the concerns of the environment, ask yourself this: would I pay for this if it wasn’t for the label?