Melanie Beckerleg in Environment on 16 November, 2013. 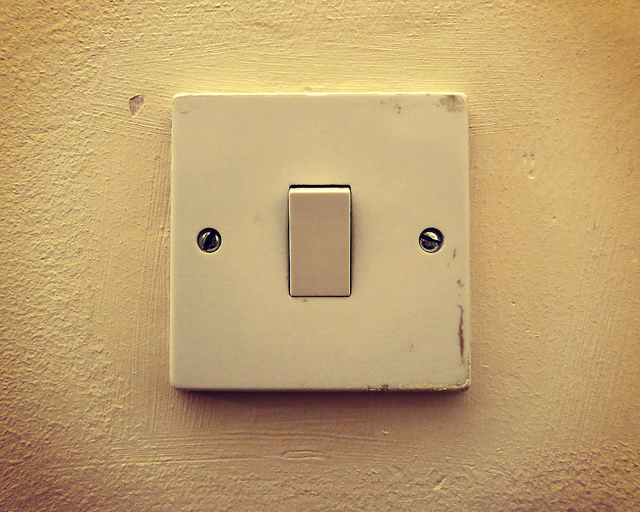 Switch it Off: How can we all engage better with climate change and the energy crisis?

It’s a lesson most of us learnt in primary school; turning the lights off when you leave a room will reduce energy consumption and help stop climate change. Simple.

But as problems such as rising levels of greenhouse gases and unsustainable depletion of the earth’s natural resources loom ever larger, you’d be forgiven for thinking that that sort of small well-meaning gesture is, at the end of the day, a bit of a farce. And to be frank, the figures would seem to support this. A standard 100W light bulb left on for four hours a day will generate 63kg of carbon dioxide per year. To put this in context, in 2007, Tesco’s carbon footprint was 2 million tonnes (equivalent to 31 million light bulbs).

When presented like that, turning the lights out when you leave a room seems about as useful as filling up a water bottle at the beach in order to combat rising sea levels. But the trouble with that logic is that it overlooks a fundamental part of the “every little helps” approach. By asking people to incorporate energy saving measures into their daily routine, they are engaging with the issue and taking steps, however small, to address it.

In a world where climate change is “one of the greatest challenges of our time”, or even “the mother of all risks we face this century”, the issue of reducing energy consumption is not one that we can afford to take lightly. Indeed, it’s not hard to find some pretty shocking statistics about the levels of emissions of greenhouse gases over the past few decades. At 31.6 billion tonnes, levels of CO2 emissions in 2012 were 40% up on those of 1990 and whilst the 2020 “two degree” limit set by the UN may still cause the melting of a “significant proportion of ice” , current emission pathways in fact have us on track for a potential 5 degree rise … The truth is, after a while the facts and figures do have a tendency to blur together somewhat. We are constantly bombarded with forecasts and warnings yet, in many ways, these sorts of statistics can in fact damage the sustainability cause.

In the face of substantial evidence for climate change, it seems absurd that the UK’s own environmental secretary, Owen Paterson, can get away with making comments such as “I think we should just accept that the climate has been changing for centuries”. To anyone who has spent any time examining the issue of climate change, such arguments are as infuriating as they are weak and complacent. At the same time, however, many people take comfort from the suggestion that the problem might all be a lot of hype, however much it flies in the face of both evidence and reason. Climate change denial thrives on the desire to avoid the unpleasantness of a situation that many people feel powerless to change. Admittedly, it’s a scary prospect; no-one likes to idea that our actions today could be causing irrevocable damage to future generations. But that doesn’t mean it’s one that we can ignore. In the context of such a pressing climate challenge, it is clear that action does need to be taken to protect the earth and its resources. To adopt the attitude that that action is not our responsibility, claiming helplessness against the big nasty corporations who are pillaging mother earth is selfish and naïve.

Thus, the issue becomes a question of how to get individuals to engage with the issue of climate change in a positive way, without becoming overwhelmed with the scale of the problem. An obvious way to do this is by presenting manageable solutions: turning off unnecessary lights, not leaving appliance on standby, walking instead of using the car, and so on.

In our modern world, with rapidly expanding technological and scientific developments, there’s no reason to believe that the solutions to climate change are beyond our grasp. The EU is, perhaps unsurprisingly, reasonably optimistic about the reduction of emissions by members, and various organisations are making environmental sustainability a priority. Perhaps more significantly, every day scientists are looking at better ways to satisfy the needs of a growing population without abusing the earth’s resources. A brief glance at the technological advancements achieved in the past few years is enough to inspire hope that solutions can be worked out, but for that to happen it is vital that our society, in particular the researchers, innovators, leaders and consumers of tomorrow, engage with and prioritise environmental issues.

So no, turning off lights that aren’t in use is not going to resolve the energy crisis. But it’s a start – a powerful tactic with the possibility to transform a well-meaning habit into a long-term solution.

On the evidence for climate change:

On attitudes towards climate change: