Dam – not another one?

Natasha Coral in Environment on 1 October, 2010. 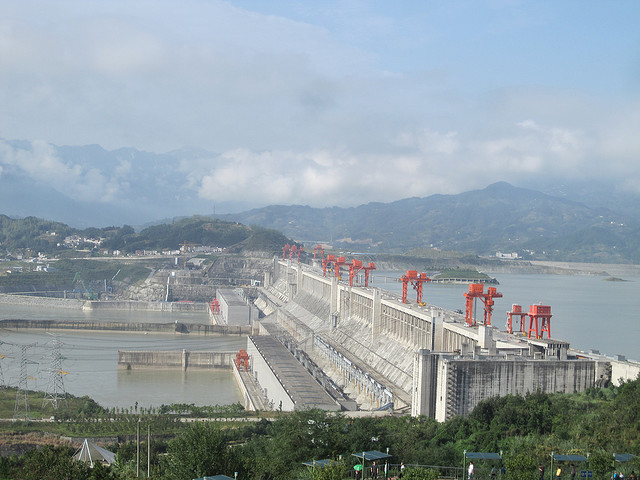 The new dam on the Amazon will be smaller than the Three Gorges Dam shown here, but the environmental impacts might be just as devastating.

Dams are nothing new. They’ve been used throughout the ages for controlling unpredictable water sources for human use and today there are around 48,000 dams worldwide.

That is a huge amount of dams, and a vast number of rivers and tributaries affected. In fact, of the 227 largest rivers in the world, 60% are severely affected by dams. That means they are fragmented, the natural flow has been interrupted and the ecosystem of the river partly, if not totally degraded.

At least 40 million people worldwide have been displaced because of dam building, when the river level rises behind the dam and floods large areas of often heavily populated land – that’s more than the entire population of Poland being forced to move.

I’m painting a pretty awful picture of dams. Apart from the huge number of cons, there are a few pros. The main one being that large dams generate about 19% of the world’s total electricity supply – renewably. About a third of the countries in the world depend on hydroelectric power for more than half of their electricity supply and millions of farmers worldwide depend on the water from dams for irrigation. They can also regulate water flow in times of flooding and drought – surely a good thing for areas where flooding and droughts are set to become more extreme through global warming.

Having said that, however, I’m still inclined to believe that dams are not something to be desired. They flood entire valleys and displace millions, usually the poor, and ecosystems and species are often destroyed. By restricting annual flooding, nutrient rich silt is no longer deposited on floodplains, which means they become infertile. Instead, the silt and sediment clog the dam and reduce its storage capacity, further reducing efficiency. It also means that estuaries and beaches downstream are not fed by sediment, thus exacerbating erosion and degradation and further threatening ecosystems and species’ survival. Plant degradation downstream produces greenhouse gasses, which offset the greenhouse gasses saved by the renewable energy produced by the dam in the first place. They encourage waterborne diseases such as malaria, and often the water becomes stagnant, polluted and unusable. And if they collapse? It doesn’t even bear thinking about.

Overall, it would seem, the building of a new dam is not a joyous occasion. For everybody, that is, except those who profit from the 50 billion annual turnover a year.

So imagine my wonder when President Luiz Inácio Lula da Silva of Brazil gave the go-ahead for the Belo Monte dam, which will be the world’s third largest hydroelectric dam and is to be built on the Xingu river, slap bang in the middle of the Amazon Rainforest, one of the most precious and biodiverse areas in the world.

This dam has been a source of controversy for about 30 years and an initial project had to be abandoned in the 1990s owing to widespread protests. These protests remain today, but so do many arguments in favour.

It is said that the dam will provide up to 23m homes with electricity and will contribute to the Brazilians Accelerated Growth Programme aim of 6% growth a year, whilst it has also been estimated that the energy generated from the dam in the next 50 years would be equivalent to 80% of the Brazil’s total oil reserves and would produce much less CO2 than if that same amount of energy were generated by oil. And, as pointed out by the President of Brazil himself, shouldn’t Brazil have the right now to take advantage of their natural resources and forests, much like the “Western world” did centuries ago?

Critics of the project would reply with an emphatic “no”, stating that the potential gains are not worth the twin effects of up to 40,000 mainly indigenous people being detrimentally affected and about 500 km2 of unique rainforest flooded, particularly given the knowledge we now have of the environmental impact of deforestation and human mismanagement.

Indeed, opponents say that the dam will be less than 10% efficient during low flow, which lasts for about 3–4 months of the year, and the INPA (National Amazon Research Institute) has estimated that for the first 10 years, the dam will emit the equivalent of 112 million metric tons of CO2. Is the environmental damage worth it? Now that this dam has been allowed, will it pave the way for damming on other ecologically important tributaries? Will the great Amazon River turn into a concrete, managed, lifeless system? The government is going to be forced to build more dams anyway, to regulate water flow to keep the dam running in periods of low flow – yet more blows to a fragile and fragmented ecosystem.

It has been said that Electrobras and the group of Brazilian construction firms who have won the bid to build the Belo Monte dam will have to pay 800m to protect the environment, but will this cover the cost? Can the 600 or so species that are found in the river, some exclusively to the Amazon, really be protected if their habitat disappears?

And conservation is not the only issue – the rainforest should be protected to prevent climate change. For if the rainforest were to disappear, so would its ability to take in excess CO2 that we humans have pumped into the air.

There have been many criticisms that the Environmental Impact Assessment studies were incomplete and there has been no assessment as to how the dam will impact the unique species found on the Xingu Tributary.

Brazilians could definitely do with a better and more consistent source of energy, and if its renewable, then even better. And who are we, “the west” to stop them trying their best to develop and grow economically, while being environmentally friendly, and use the resources that they have a right to?

Well, critics also suggested that Brazil could upgrade its existing energy systems and could push for rapid development of its wind, solar and biomass energy production systems which, according to one study, lose about 16% of its power through old, faulty and inefficient distribution systems. The 6% growth could be met by increasing the installed capacity of wind power, which is currently at a lowly 400 MW capacity. Now, there is a solution. Increased energy for a growing economy and no environmental damage to one of the most important ecosystems in the world.

So, although the Brazilian authorities might dispute the right of the “Western world” to object due to our history of environmental exploitation, in my opinion they do so erroneously. For while we may have destroyed our forests years ago, we didn’t have the knowledge then that we do now, and that knowledge is telling us, the whole world, that the destruction of our inextricably linked ecosystems and our precious environment is not the right way to go – and I’ll be damned if we should sit back and watch others repeat our mistakes.