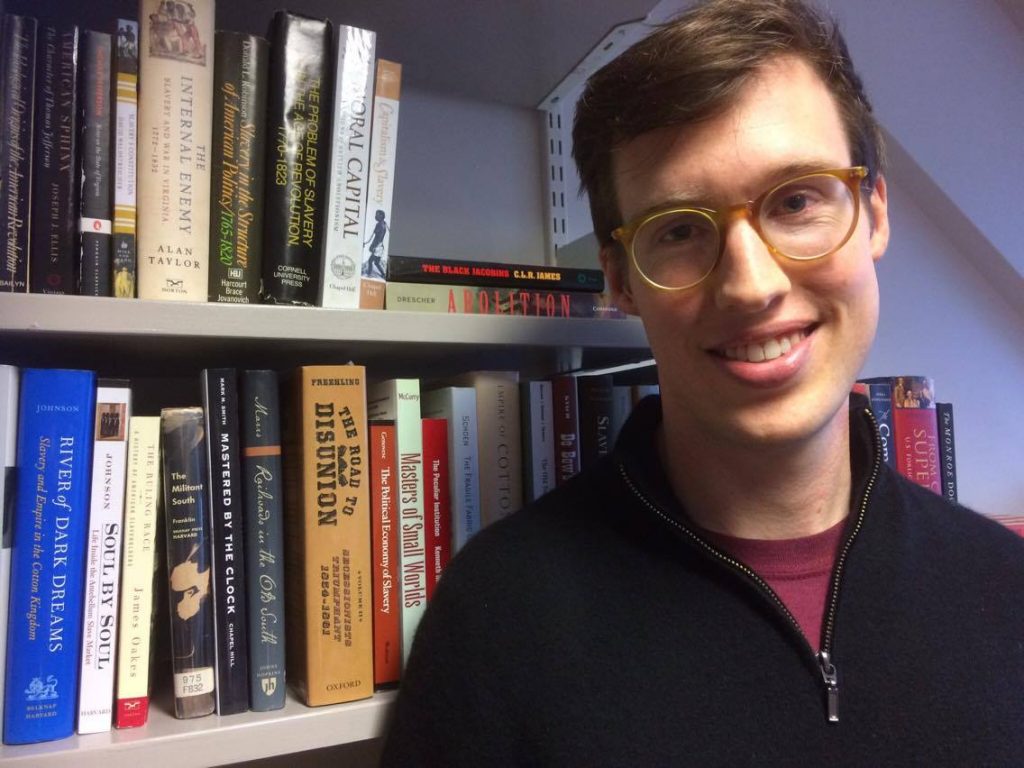 Dr Kevin Waite is an American slavery lecturer for Durham University’s History Department, specialising in the political history of the American South in the 19th century and Southern slavery. Previously a professor at the University of Chicago, he offers The Bubble his views on ‘the Donald’ and his potential impacts, environmental and otherwise.
The interview took place on 27/01/17, tackling the big questions resulting from Trump’s first week as President of the U.S.A.

Q: What were your most striking thoughts when you were watching the inauguration? 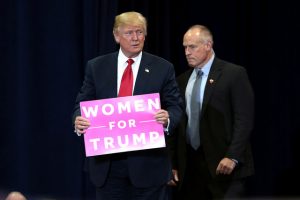 Donald Trump speaking with supporters at a campaign rally at the Phoenix Convention Center in Phoenix, Arizona (photo by Gage Skidmore)

K: My immediate thoughts were: this guy is still both a clown and a disaster. What really concerned me was his insistence on American isolationism and America’s withdrawal from global affairs. Within the first week it’s already become clear that he’s really going to limit American outreach and humanitarian aid, which is going to have some disastrous consequences. We’ve seen it with what’s known as the ‘Mexico City Policy’, withdrawing foreign aid from charities that perform abortions. Whilst it’s what every republican administration does in their first week, what is alarming about Trump’s approach is that he seems to be cutting off aid from organisations who even talk about abortions. We’re yet to see the fallout from this, but I think that it’s going to have immediate consequences on thousands of lives.

Q: This ‘gag rule’ must have particular precedence to you because of the version enacted by the House of Representatives in 1836 over anti-slavery discussions. Do you see any relevance in that parallel?

K: It’s never good when you can be placed in the same camp as 19th century slaveholders in terms of restrictions on free speech. The gag he put on federal employees like the EPA and Park Service workers is alarming. Some have even reacted by ‘going rogue’. Somebody had access to the Badlands National Park account and started tweeting facts about climate change, which were quickly taken down. And whilst it  shouldn’t be entirely surprising to see the Trump administration scrub the website clean of all references to global warming and climate change, I think it showed just how starkly divorced from this issue Trump and his team are. How willfully ignorant they are.

K: Everybody talks about the next 4 years – we just need to make it through the next 4 years, then we’ll have a progressive Democratic candidate in office and things will get better. I’m not entirely sure it’s going to be just 4 years. I mean, look at how all these liberal voters were bamboozled in November. I was really convinced that Hillary was going to win, as was the mainstream media. Hell, I even gave a talk on what would happen after Hillary won. That said, the way the last week has gone it seems entirely likely he’ll get impeached. I think a lot of Republican congressmen would like to see that happen, like Mike Pence who aligns a lot more closely with standard right wing Republican ideology. Trump is a total loose cannon and nobody’s quite sure what we’re going to get. With Pence we know exactly what we’ll get. His presidency would better empower a Republican Congress. 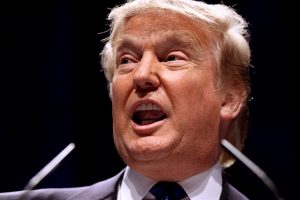 Q: Some people speculate the surprising outcome is due in part to the rise of the internet. We go online into a world of mirrors where our own opinion is just reflected back at us, making us complacent and less likely to vote or protest. Do you think this view is relevant?

K: I agree with all of that. We knew the election was going to be a little too close for comfort because American politics have become so partisan. It seemed very likely that traditional Republican voters would vote Trump and traditional Democratic voters would vote Hillary. But people on the left thought there would be a critical mass of either disaffected Republican voters or newly impassioned liberal voters to tip it in Hillary’s favour. What’s surprising to me about Trump’s victory isn’t so much that the West Virginia coal miners, with legitimate grievances over their declining economic power, voted for him. It’s that he won over the well-educated Republicans who aren’t hurting, and who are doing pretty well in this near full-employment economy.

Q: Do you think that this demographic still feel positive about the way they voted? Or do you think there is now a kind of myriad, secret Trump voter?

K: The media has yet to focus on this. I mean, I remember the day after Brexit and how everybody was googling ‘What is the EU? What is Brexit?’ but thus far the media hasn’t focussed on the regretful Trump voter, though I’m sure they exist. It’s hard for me to assess just how numerous they are because honestly, I don’t really know any Trump voters. This should tell you how much of a bubble I live in and how hive-like American politics has become.

Q: Some Trump voters I’ve met told me quite staunchly that the reason they became pro-Trump is because they wanted Bernie. Do you think this is relevant on a large scale? 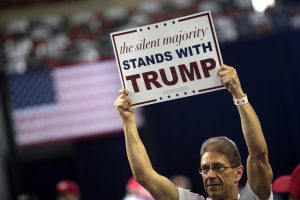 K: I knew that demographic existed and I’d overheard conversations from Bernie supporters about shifting allegiances because they thought Trump was the most populist and most anti-corporate – which is beyond ironic. I don’t think Hillary was any great champion of the lower classes, but I find it indisputable that her policies would have been better than Trump’s for most poor Americans.

Q: To what extent do you think the candidacy of Hillary as opposed to Bernie affected the result?

K: I’m not entirely convinced that Bernie would have beaten Trump. We now know that Trump locked down the mainstream Republican vote that Mitt Romney won and then added some disaffected rural white voters to that mix. I’m not quite sure Bernie could have galvanized the centre enough to combat this strong Trump surge.

K: The short answer is no. My prediction is the Dakota and Keystone pipeline will, ironically, negatively affect the fortunes of Trump himself. Oil prices are already low and if they sink further it’s actually bad for global markets and bad for the New York Stock Exchange in particular. At the beginning of 2016, there was a significant drop in oil prices and Dow-Jones got hammered. I imagine if Donald Trump cares about anything he cares about his stock portfolio! I think that cheaper American oil will only drag down certain sectors of the American economy. Then of course there are the really significant environmental factors. To be honest, there are moments in this Trump presidency where all you can do is laugh at the gallows humour because it’s just so bleak and so farcical. But then you check yourself and realise that it all has very scary and very real consequences.

Q: Some would argue that Trump’s first violation of both environmental and human rights came from his appointment of Rex Tillerson, an ex-chief executive of ExxonMobil, as his secretary of state. Would you agree with this?

K: Trump quickly betrayed the working class white American voter that he claimed to champion by appointing a bunch of billionaire crony capitalists. He hasn’t drained the swamp, he’s just risen its water level. Rex Tillerson, Scott Pruitt, Rick Perry; big oil is going to run a significant part of this administration. I’ll preface what I’m about to say about big oil and coal by saying that I don’t actually think carbon emissions are quite as harmful as the Al Gore party line has made them seem. I certainly don’t dispute global warming, I certainly think we should try and reduce our carbon footprint, and I think we need an activist state to do this. But I don’t think the planet is going to melt in 50 years. In fact, I think bigger environmental issues in the here-and-now are deforestation, over-fishing and general pollution, which you can see as distinct from carbon emissions. 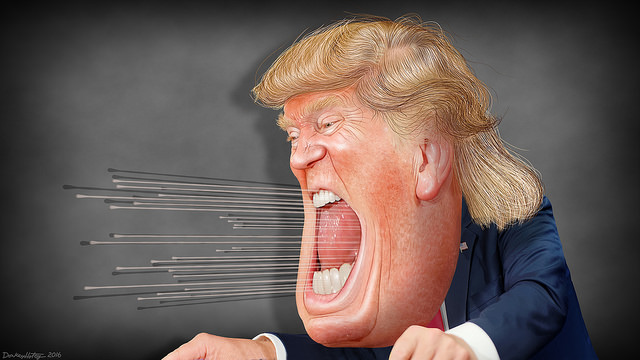 A caricature of Donald Trump, firing bullets from his open mouth

Q: Do you feel Trump’s meeting with 3 top car manufacturers to ‘ease environmental regulations’, saying ‘environmentalism is out of control’, is a reflection of his future environmental approaches?

K: What really worries me is how Trump panders to his base by claiming that coal and oil are going to bring back prosperity and jobs to the U.S.. That’s just not true. Coal’s sun is setting. There’s not a whole lot Trump can do to bring back the glory days of coal mining in West Virginia. The fact remains that natural gas is now a cheaper and a cleaner substitute for America’s electricity needs, and the easily accessible coal veins are all gone. This means that to get at coal, we need to blast off mountain tops and dump all that debris somewhere, often into rivers. I mean, coal is just a travesty for the environment. 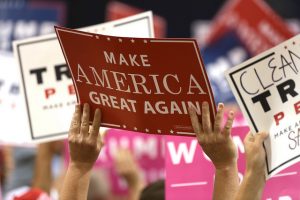 Q: If someone is concerned about Trump, what practical action would you recommend?

K: This goes back to international aid. One option is to give money to organisations like the Sierra Club and Greenpeace, which I think is a perfectly good use of your funds, though their campaigns are phenomenally expensive. They’re trying to make legal and legislative changes, but they need tonnes of money to do so. So if small net-worth individuals wanted to make an immediate impact, there are better places for their money. For example Population Services International, which is a globally focussed charity which provides family planning education and general humanitarian aid. They’ve been shown to be extremely efficient in the way they allocate their funds.

Q: Do you think it is important to keep reading the news? Or do you feel the media may be misleading?

K: I think the media has belatedly recognised just what a terror Donald Trump is. Certainly, some mainstream news organisations were calling him out on his bullsh*t during the election, but the amount of air time that Hillary’s emails got over Trump’s clearly disastrous policies was disproportionate and insane. I think the media now is incredibly alarmed, and rightfully so. On reading a lot of news: I can’t help it, I’m addicted to it, though it tends to boil my blood. I think giving money to humanitarian organisations is where I’d like to see a lot of this outrage channeled.

Q: Is there any reason to remain positive? 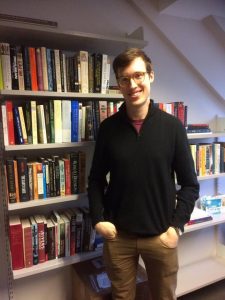 K: There is reason for hopefulness. If we take a step back and look at the big picture, global poverty has fallen. About a quarter of a million people every day are graduating from extreme poverty, which means that you make less than $2 a day. The global poverty rate is now under 10%, whereas in the ‘80s it was above 40%. This is really heartening news and demonstrates why humanitarian aid is so important. Whilst I would prefer if the global population wasn’t so monstrously large, we have an obligation to the six billion or so people living on this planet. By many measures, things do seem to be improving for people in the third world. So, that’s what I tell myself when I don’t want the world to seem quite as apocalyptic as it sometimes appears. That said, 2017 is starting to look a lot like 1984, and we’re only a week into this presidency.

For more information, questions or updates, follow The Bubble on social media.
Gage Skidmore is a pro-Trump photographer who can be found on Flickr, who has given permission for commerical use of his photos where accreditation is provided.