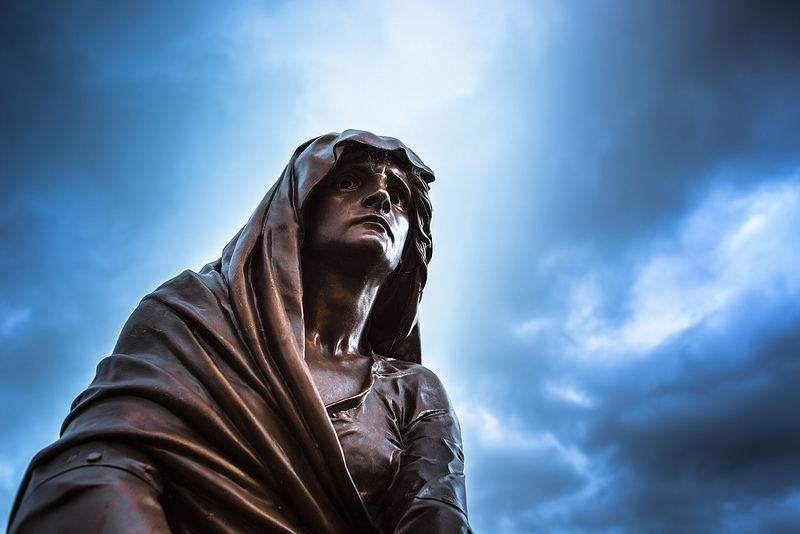 Folds of crimson curtain frame shelf upon shelf of books, tightly stacked around the stage as if to denote the walls of a university office. There is a continuous rustle of programmes and wrappers. People peer out from the darkness, perching on their fold-down seats. Lights dart around the stage, before settling to stage left. A hundred faces are drawn to a heavily grained, wooden desk at which a well bearded lecturer looks out over a scattering of half-marked essays to his comically improbable student. We are watching Willy Russell’s ‘Educating Rita,’ intent on a time of diversion and amusement, spending the evening sucked into the life of our two protagonists and away from the comings of goings of everyday life. I have sunk far back into my seat, enraptured by the unfolding storyline. As if Rita herself, impassioned by her recent viewing of a Shakespeare production, I listen intently to the musings of this lecturer. But then, suddenly a particular exchange awakens me from my state of repose, transporting my mind from the theatre and straight back to the geography lecture room:

“Macbeth is flawed by his ambition… it’s that flaw which forces him to take the inevitable steps towards his own doom…Macbeth is a tragedy. Tragedy in dramatic terms is inevitable, pre-ordained. Look, now, even without ever having heard of the story of Macbeth you wanted to shout out, warn him and prevent him going on, didn’t you? But you wouldn’t have been able to stop him would you?… what I mean is that your warning would have been ignored. He’s warned in the play. But he can’t go back. He still treads the path to doom…You see he goes blindly on and on and with every step he’s spinning one more piece of thread which will eventually make up the network of this own tragedy.”

I understand, of course, that the relevance of this article for an environmental section may seem somewhat dubious at this moment in time. However, as I sat in that theatre, I was suddenly struck by the parallels between the tragedy of Macbeth and the current concerns regarding human driven climate change.

Over 400 years ago, Shakespeare conceived ‘Macbeth’, a play which is recognised today as one of the greatest tragedies ever written. By tragedy, I refer, in this case, to the literary interpretation whereby the plot follows the journey of a leading character as their own personalities, desires and actions take them progressively closer towards their inevitable downfall. As I look forwards to the coming 400 years I dread that the outcomes of anthropogenic climate change may well echo the tell-tale signs of a Shakespearian tragedy.

For those of you who are not familiar with ‘Macbeth’, this renowned play follows the story of a general who is predicted by a trio of witches to become the King of Scotland. Throughout the play, Macbeth becomes increasingly infatuated by the promise of such power and becomes overwhelmed by this ambition, losing his sense of morality, eventually resulting in his death.

When watching a performance of ‘Macbeth’ or any other tragedy, we, like Rita, may harvest a burning desire to reach out to the actor as he moves, step-by-step, closer to his doom. Many of us will hold back our qualms, choosing rather to watch the motions in silence. The occasional person may even release a warning cry from the auditorium. Perhaps the actor might even falter, unnerved by this intrusion to the predetermined script. Then again, as said by Willy Russell, it’s far more likely that the show would go on, ignored by Macbeth as he proceeds blindly along his erroneous pathway. Similarly, scientists are increasingly sure of the outcome of the story and are ever inspired to shout out to the rest of humanity about the consequences of their actions. However, my concern is that scientists and other activists may not be able to shout loud or persistently enough to stop humanity in its tracks and make people absorb the magnitude of the implications of anthropogenic climate change.

When I consider human nature and our instinctive drive towards self-improvement, I fear that we, like Macbeth, will be unable to conquer the flaw that is our ambition. We have tasted the luxuries of modernisation and of materialism. We have been enticed by the promises of a tomorrow of increasing prosperity and ease of living and we have been sucked into a life of colossal energy consumption and environmental destruction. Do we have the strength or the motivation to make such radical self-amendments as would be necessary to combat climate change?

Unlike Macbeth, we have all the benefits of foresight. Just last month, the Intergovernmental Panel on Climate Change (IPCC) informed us that the anthropogenic contribution to global climate change can be claimed to a 95% certainty level, removing all reasonable doubt that the impacts of human activity are extending to the atmosphere. Accompanied with a range of alarming predictions regarding temperature change, weather patterns, ocean acidity, global circulation systems… (the list goes on), it is undeniable that human environmental impact is a subject of real concern and has the potential to seriously disrupt the global equilibrium.

I am not a cynic. I’m just not convinced that we can change. Perhaps a loud enough shout is well within scientists’ capabilities, especially when backed by media or political support. Scientists’ warnings have already induced huge changes from the small scale contributions that each of us makes by turning off the lights or recycling to global scale collaboration via schemes such as the Kyoto Protocol or carbon credits. To me, this sparks embers of hope: hope that the reduction of human induced climate change will grow out of its germination stages and reach maturity.

However, we have a long way to go before these early attempts at self-amendment amass to the kind of radical change needed to ensure future environmental security. We need to readjust the very fabric that makes us human and challenge the otherwise ‘inevitable’ and ‘pre-ordained’ fate that shall surely await us if we allow human ambition to continue uncontested.