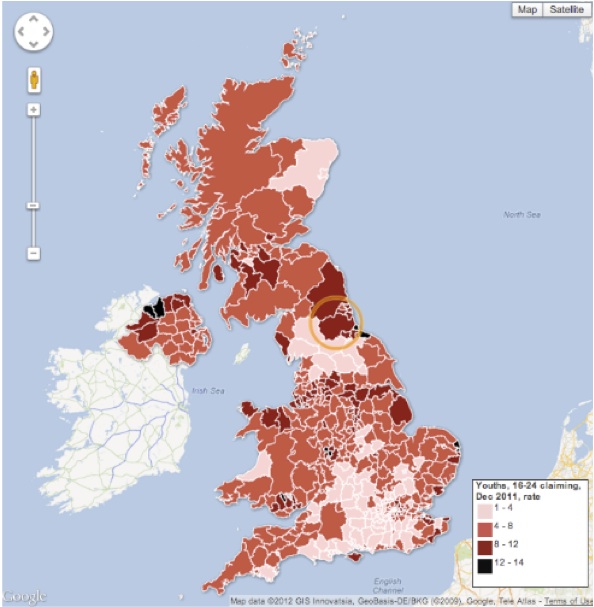 This year there are over one million unemployed 16–24 year olds in the UK. 74 000 youths are defined as ‘not in education, employment or training’ (NEET). In the last quarter alone, the fourth highest quarter since records began. County Durham is one of the worst affected with 8.7% of under 25s claiming benefits. That’s 4780 young people in one county. Close by, in districts such as Hartlepool figures have risen to 13.3%.

Yet, despite these drastic figures, the British government decided to scrap the Education Maintenance Allowance (EMA) given to youths on lower incomes to encourage them to stay in education. At the same time, starting in October 2012, the average cost of a three-year university degree has risen to £25,179. This means that because of financial reasons, hundreds of students each year are prevented from receiving the education they need in order to build on the talents they have.

The solution sought for this is a simple one: in order to give young people in the UK a higher chance of success, they need to know what their options are. All this involves is a basic financial and entrepreneurial education that any adult would benefit from. It will give students an opportunity to broaden their horizons and see beyond the limits of school, university or uninspiring jobs. What is needed is a passionate motivational force that will demonstrate to those that gave up on themselves the opportunities they really have, rather than taking different options away from those most in need.

However, again the government is refusing to take explicit action to further the development of a successful, diverse and self-sufficent society, and rather increases the predicament of a ‘lost society’ whose main outlook remains a downward-spiralling, one-way economy. A generous estimate for the growth rate forecast for 2012 lies around 0.4%. Less money is being spent supporting small businesses and large amounts are still being given to banks: RBS was given 45bn of the taxpayer’s money in 2008, in 2011 they made their largest loss yet: £2bn.

With a society sporting numerous multi-generational benefit claimants, inherent debt cultures and increasing numbers of loan sharks, offering fast cash at horrific interest rates, the financial crisis is unlikely to change dramatically in the future. What needs to change is the way people learn and care about their money. In 2011, Money Advice Trust identified over 55 000 youth unemployed with serious, unmanageable debt problems.

In early January 2012 David Cameron finally responded to an open letter demanding compulsory financial education in schools. Unfortunately there was no conclusive answer and the issue will be reviewed. Over 100 000 people signed the repeated petition for compulsory financial education to ensure schools take the subject seriously. The first report on the issue by the All Party Parliamentary Group, entitled: Financial Education and the Curriculum, was presented at the end of last year. Nonetheless, it could be years, and another ‘lost generation’ later before anything actually changes.

Problems such as high youth unemployment, inherent debt problems and lacking financial education are being tackled from within society. As so often, America is one step ahead- but Durham is not far behind. This year, Durham has developed its very own answer to these problems. Moneythink is a 10-week syllabus on financial education and entrepreneurship thought to 15–17 year olds at those schools in the Durham area which have the most students in need. The program, initially developed in the US, has seen 92 students from Gilesgate College graduate this year. Each student ended the course with a clear understanding of key financial concepts (debt, saving, budgeting, credit etc.) and presented a fully-fledged business idea at the end of the course. The course covers everything from Michael Jacksons spending behaviour to tips on entrepreneurship from Mark Zuckerberg and Steve Jobs.

This is a very small step, but that is not to say it cannot make a difference. Within only three years the American program is running in over 20 different cities across the US, recently won the White House Champions of Change competition, and is now in discussions with Barack Obama’s administration. Moneythink Durham is looking to achieve at least the same, hoping to have over 1500 students graduate from the program in the next three years. A first step towards this was achieved by getting to the finals of the university’s Dragon’s Den competition, setting an example of what the program itself is trying to encourage. Moneythink Durham is the first chapter to be up and running in the UK, with Oxford and Cambridge following its lead. Before becoming complacent however, Moneythink Durham is now looking to expand further afield into county Durham. Whilst 2-day workshops and weekly classes were successfully taught to two different year groups and two different levels of learning ability, the success of the course remains fully down to the commitment and enthusiasm of the mentors.

For anyone interested in helping a worthwhile project, closer to home, and thus tackling the financial crisis from its very roots, please get in touch via email to: Rebecca@entrepreneursdurham.com.