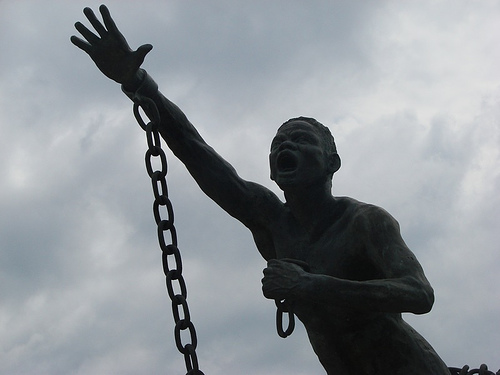 “People seem to believe that slavery was eradicated hundreds of years ago. Unfortunately, this is not the case.”

Modern day slavery and human trafficking will be the focus of a film night in Durham on Wednesday 29 January. The films will explore domestic servitude, sexual exploitation and forced labour. Durham University Stop the Trafficking of People Society (DUSTOPS), in collaboration with Bede Film Society, will host the event organised by the charity Unchosen UK at Caedmon Hall, College of St Hild and St Bede at 7:15pm.

This film roadshow is part of a wider campaign by DUSTOPS for Human Trafficking Awareness Week. Events and campaigns like this are so essential because human trafficking is an issue which many governing bodies simply want to ignore as people seem to believe that slavery was eradicated hundreds of years ago. Unfortunately, this is not the case.

In a report published by the Home Affairs Committee in May 2009, it was estimated that there are at least 5,000 trafficking victims in the UK, yet because trafficking is a ‘hidden crime’, accurate statistics are hard to find. Threats and coercion from traffickers and a lack of awareness by front-line forces all lead to the problem remaining underground. We need to bring it above ground in order to be able to deal with it more effectively. Raising awareness is key in the fight against trafficking, and this film event is a definite step in the right direction towards this, since if people know that modern day slavery is a problem, they can learn how to spot the signs that it is occurring. Unchosen UK, the charity behind the event, states that “The more awareness there is, more victims will be identified and perpetrators prosecuted.”

The films to be shown include ‘Let’s Talk About Sex’, written and directed by Li-Da Kruger, which is about Anja and Ian, a man and woman from two vastly different backgrounds with two vastly different experiences of a sexual encounter. ‘The Trip’, directed by Prano Bailey-Bond and written by Anthony Fletcher, meanwhile, tells the true story of Hung, a young Vietnamese man trafficked abroad on the promise of a job and a new life in the UK, only to be forced to work in a cannabis factory upon his arrival. As a prisoner, his existence becomes monotonous and claustrophobic. ‘My Name is Georgina’, written and directed by Michael Holley, will also be shown at the event. In this film, a teenage girl from West Africa is tricked into a life of domestic servitude in the UK. Aided by a teenage truant she manages to escape from her traffickers and gain the freedom, safety and education she has longed for. This wide variation of topics shows the reality behind human trafficking; there are so many different types that occur, which is another reason why it is such a complex issue. However, films such as ‘My Name is Georgina’ suggest that there can be hope for a better life for the victims of trafficking. Whilst trafficking is a prolific problem, it’s not an unsolvable one; we just need to work hard to eradicate it.

Films like these also reveal that it’s not just adults who fall victim to human trafficking. In 2011, the Children’s Commissioner for England announced there could be up to 10,000 children being trafficked for sexual exploitation in the UK. For instance, 52 UK citizens were trafficked for sexual exploitation with over 80% identified as female children. But the criminals are just not being convicted at the rate at which they should be. For example, according to the UK Government Report on the Internal Review of Human Trafficking Legislation in May 2012, there were only 8 convictions in 2011 — 2012, and these were for sexual exploitation alone. No-one was convicted for non-sexual exploitation, even though it is evident that these crimes did take place. However, more recognition is being given to the problem at present, with the Modern Slavery Bill soon to pass through Parliament. Thus, progress may be made in the near future.

On the night of the film roadshow, there will also be a panel of experts who will discuss the issues at hand, which will include Gary Craig, Professor of Community Development and Social Justice at Durham University and Forced Labour and Trafficking Researcher at the Wilberforce Institute; Camilla Brown, the UK and Ireland coordinator for Unchosen and a specialist on domestic servitude and Gary Fernandes, a local police inspector in the Community Safety Department of Redcar and Cleveland. This is perhaps a sole opportunity to listen to such renowned speakers on this topic.

Whilst trafficking is a global issue, with the International Labour Organization estimating that 20.9 million people are victims of forced labour globally, Stop the Traffik, another national organisation working in the UK to deal with human trafficking, suggests that connecting local activity to the global problem is also crucial, hence the importance of this event to Durham’s self-contained action. DUSTOPS wants to make Durham a slave-free zone, but that can only happen if the university, and the city as a whole, works together. The North-East region has the highest rate of human trafficking in England outside of London, which is why this North-East premiere of the road-show is so crucial.

Ultimately, this event promises to give great insight into the important and topical area of contemporary human rights issues and slavery within the UK.

You can also find the event details on: http://www.durhamsu.com/groups/stop-the-trafficking-of-people/events/unchosen-uk-north-east-film-premiere