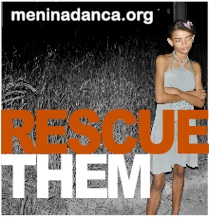 I want to highlight a specific issue in this article. I want to bring a problem to your attention, and tell you of the work that one charity is doing to change it. I want to talk to you about something uncomfortable, horrific and heart-breaking. I want to tell you about child prostitution in Brazil.

There is a motorway called the BR-116. It stretches for 2,700 miles across the diverse and beautiful country of Brazil through the most populated regions, past big cities like Porto Alegre and São Paulo, all the way to Fortaleza in the north. The BR-116 is used constantly by truck drivers and there are many towns and villages along its breadth. In these rural poverty-stricken places are children as young as 9 years old, ‘working’ on the side of the motorway by selling their bodies to passing truck drivers. The BR-116 is the most active road in the world for the sexual exploitation of children. Every 10 miles a child is sold for sex. The problem is ignored, and victims are found hundreds of miles outside of their home towns. Brazil itself is second only to Thailand in the number of children in prostitution – half a million are estimated to live in this way (UNICEF).

I don’t think anyone reading this can be unmoved by this despicable reality and the plight of the precious children involved. Meninadança is a charity working specifically with the children selling themselves on the BR-116. Shockingly, it seems to be the only charitable organization working with them at this time. Meninadança means ‘Girldance’ in English, and uses dance and other therapies, combined with founding safe houses to rescue girls stuck in child prostitution.

Meninadança are already making a difference to these girls. There is presently one dance centre in a favela (slum) in Belo Horizonte, and there is planning for two more centres on the BR-116. The work of this charity is just beginning and needs much support. Their long-term vision is a network of safe houses in key communities along the BR-116 motorway, as well as a presence in inner-city favelas where abuse and prostitution is destroying young lives.

Through the work of Meninadança, abused girls are rediscovering their self-worth and hope for the future. Sexual exploitation robs girls of childhood, leaving psychological scars and trauma that can be lifelong. However, through Meninadança they find confidence and purpose in their dance. More than anything these girls are being told they are worth attention and time and care, and are being given space to have a childhood again. Meninadança takes preventative measures and works with girls who are at risk of child prostitution as well as girls already involved. These girls are being given a future and love that isn’t dependent on what they can do, it is unconditional.

I watched an interview provided by Meninadança. They were speaking to the mother of a teenage girl involved in prostitution who has run away from home. The mother said that the worst thing about the whole situation was that the girl wasn’t bringing any money home. This mother had been a young prostitute herself and her daughter who has disappeared is also pregnant. This cycle of prostitution must be broken. The environment these girls live in is almost impossible to leave; many girls are forced to prostitute themselves by their own parents. Sexual abuse within families and communities is also an issue, and this behaviour is accepted as commonplace. As generations of girls and women are abused like this, the case looks hopeless.

But it isn’t hopeless. Not if we stay aware of these situations and support the people and charities who are making changes right now. Meninadança is one of these charities. Just looking at the pictures of the girls dancing on their website is enough to see this is a worthwhile cause. Child prostitution in Brazil and world-wide is a huge challenge seemingly outside the boundaries of law and morality. It is also hugely important and it is happening right now. It is too important to ignore.