The Cost of Corporate Tax Avoidance to the World’s Poorest 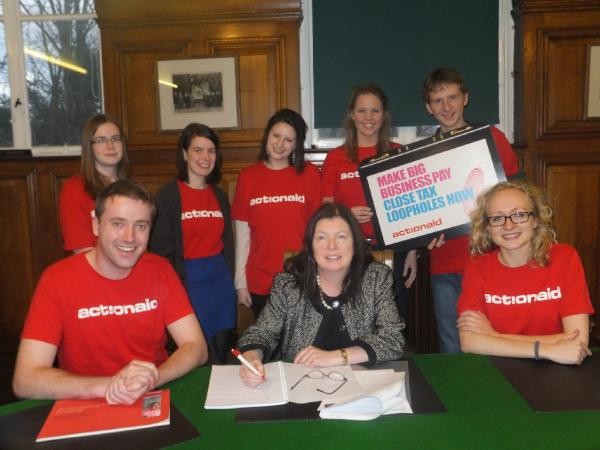 Tax avoidance. Doesn’t sound like the most exciting topic ever, does it? But it’s far too important to be boring – tax avoidance by multinational corporations is having a devastating impact on the world’s poorest communities. In fact, the amount of money that is lost by the world’s poorest countries into tax havens is three times what is given in aid. That’s money that governments need in order to provide basic services – schools, hospitals, ambulances and the roads to drive them on, sanitation, rubbish collections – and it’s going straight into the pockets of some of the richest people in the world.

This leads to a situation in which individuals running tiny market stalls pay more taxes than the giant multinationals that supply them. In Accra, capital of Ghana, Marta Luttgrodt sells beer made by SABMiller, maker of Grolsch, Peroni and many other brands. She pays around £50 per year in tax. Next door is Accra Brewery, owned by SABMiller, which produces beer worth over £30 million per year. Officially, Accra Brewery often makes a loss, meaning it isn’t liable for Ghanaian corporation tax; instead, it pays enormous sums in ‘royalties’ or ‘service fees’ to sister companies in tax havens with much lower taxes on profits. The result: Marta pays more corporation tax in Ghana than SABMiller does. Overall, ActionAid has estimated that SABMiller has managed to reduce its tax bill by nearly £20 million per year in Africa and India. And they’re not the only ones at it: 98% of the UK’s largest companies use or operate in tax havens (regions with low rates of corporation tax that allow or encourage companies to operate in secrecy to avoid higher taxes elsewhere).

Don’t forget: this isn’t money that isn’t needed. It’s been estimated that money lost to tax dodging could end the spread of AIDS, provide education to every one of the 67 million children who don’t receive any schooling, and provide the resources to end hunger. That’s why ActionAid is campaigning against tax avoidance.

In the UK, we’ve got an enormous amount of power to act. The UK has control over a fifth of the world’s tax havens, and the UK has accepted that tax avoidance is incredibly damaging – now they just have to act on it! That’s where our campaigning here in Durham comes in. With a range of exciting activities designed to get people’s attention, we’re trying to show the government just how much people care about tax avoidance and why we should do something about it!

In the past, we’ve held a range of events to raise awareness of ActionAid’s campaigns. We’ve had photo campaigns in bars and clubs around Durham, dressing up as giant beer bottles to get noticed. On a snowy day in February, we hosted a debate about the positive and negative impacts of biofuels, inviting Fiona Hall, MEP for the North East, as well as campaigners from ActionAid’s London office and a representative from a local biofuels refinery. We met Roberta Blackman-Woods, MP for Durham, and were delighted to hear about her support for our tax justice campaign. Last summer, we joined up with dozens of other charities to promote the global Enough Food IF campaign, asking for the G8 to commit to tackling hunger. We’ve met up with ActionAid members worldwide and heard about how the issues we care about are affecting their communities. And we’ve had fun!

Of course, that’s not all ActionAid does. ActionAid is a global development organisation. We work in 45 different countries and with over 2000 other organisations and community groups, with a focus on working with communities to find solutions rather than imposing them from the UK. We take a rights-based approach to development – helping communities to claim their rights by tackling the causes of poverty rather than just the effects. Basic necessities like food and shelter are human rights.

So another part of ActionAid Durham’s activities is to support ActionAid’s work by fundraising, such as cake sales, rag raids, sponsored events. In fact, in 2012, ActionAid Durham won the DUCK Best Fundraising Society award for our Live Below the Line challenge, where we raised over £2000 by asking for sponsorship to feed ourselves on £1 a day for five days. At the moment, we’re raising money for ActionAid’s Syria Crisis Appeal, providing essentials such as food, hygiene equipment, clothing, and first aid training (something that many have asked for!) for the two million people who have been forced to flee from the violence and destruction in Syria.

So ActionAid Durham isn’t just a society – we’re a tiny part of a massive global movement to further human rights and end poverty, by working together for everyone.

If you want to know more about our tax justice campaign, we’re hosting a screening of the acclaimed film The UK Gold – an award-winning documentary exploring global tax dodging through the eyes of an East London vicar. The film will be shown at 7:30pm on Thursday 7th November in CG85, and entry is free.

If you want to get involved further, come to one of ActionAid’s regular meetings: Thursday nights at 7:30pm in Elvet Riverside 143. In a few weeks’ time we’ll be unveiling a brand new campaign exposing the tax-dodging activities of an – as yet unnamed – UK bank, and putting pressure on them to lead the industry by changing their ways!

For more information on any of our campaigns or events, please contact action.aid@durham.ac.uk.