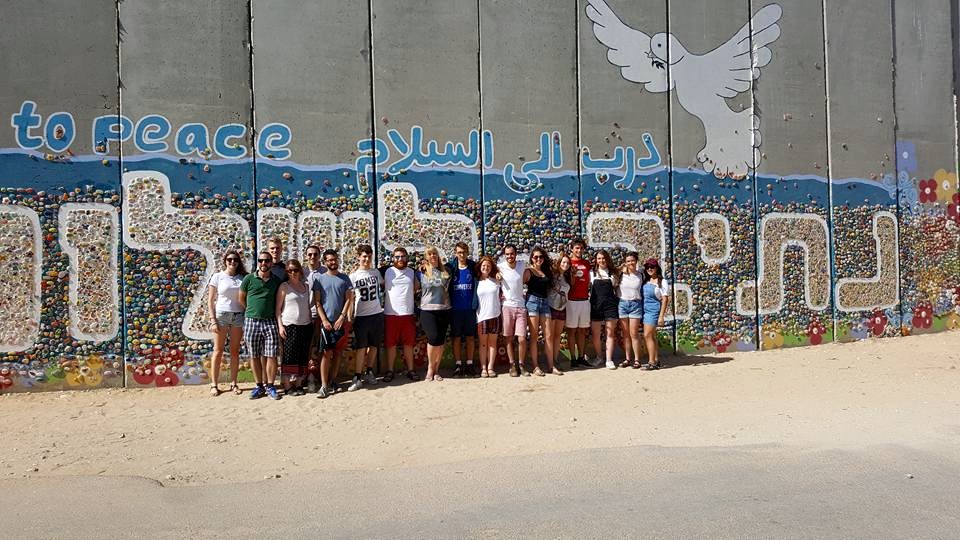 Young Yachad activists visit a peace mural on the Israel/Gaza border during the Yachad Student Trip to Israel and the occupied Palestinian territories.

It took courage for the founders of Yachad (‘together’) to form an NGO openly dedicated to challenging the relative hegemony of conservative Zionism in Jewish civil society, and promoting support for a “two-state solution” to the Israel-Palestine conflict. For me, as someone who has on various occasions had my Jewishness, community loyalty, and personal integrity called into question for criticising Israeli state violence towards Palestinians, it was exceptionally powerful to see Hannah Weisfeld, Yachad director, bravely speak out in public about some of the censorious attitudes towards criticism of Israel which exist among some sections of the Jewish community.

That bold work of people like Hannah and her fellow activists in Israel-Palestine has inspired many young people to take up the pro-peace cause.The new Yachad campaign, ‘Partners to Peace’, demonstrates the hope, optimism, and commitment instilled in us. With ‘Partners to Peace’, we are fundraising for the Holy Land Trust, a Palestinian organisation which teaches anti-Occupation activism through the prism of nonviolence. We want to raise money for two projects: one aimed at teaching leadership skills and nonviolence to young Palestinians directly affected by the conflict with Israel, and another programme aimed at empowering young girls in Palestinian society.

The aims of the Holy Land Trust are noble in themselves – they are trying to empower youths currently caught between a corrupt and undemocratic Palestinian regime and the oppressive Israeli military occupation, and pluralise Palestinian civil society away from the corrupt and ineffectual mainstream political factions. However, despite the worthiness of the cause in itself, it is no small matter that a Jewish Zionist organisation is raising money for it. In mainstream Jewish civil society, the notion of “partners for peace” is generally deployed in terms of a supposedly self-evident absence of any willingness to compromise for the sake of peace on the part of the Palestinians.

Indeed, the idea of a lack of “peace partners” or “partners for peace” is a favourite turn of phrase for Israel’s Hard-Right Prime Minister, Benjamin Netanyahu. Generally, this revolves around using the woeful Palestinian Authority leadership, the corrupt de jure Palestinian government which has minimal de facto legitimacy within Palestinian society, as a ‘proof’ that ‘the Palestinians’ are not worth even attempting a new peace process, or worth making ‘concessions’ (such as an end to expansion of the illegal Israeli settlements on occupied Palestinian land). The phrase is used to mock the very idea of negotiation – to aid in the constant manufacturing of an image of the Palestinians as a homogenous and intractable ‘Other’, a totality culturally unsuitable (or at least unready) for adult conversation at the grown-ups’ table. This generalising narrative and imagery gets played out across the Jewish Diaspora, providing a vivid justification for the rejectionist consensus that being part of the pro-Israeli ‘tent’ is to believe that peace is not viable, and that questioning the treatment and portrayal of the Palestinian people is something inherently anti-Israel, and ostensibly anti-Jew.

On the contrary, I saw nothing but the antithesis to Jewish values and to the lessons of our own history in Israeli-occupied Hebron, where “Kill Arabs” was sprayed on the front doors of Palestinian families with young children, and it is with Jewish values and history in mind that we have launched this campaign. So ‘Partners to Peace’ is as much about fighting the rejectionism as it is about fundraising for a specific organisation. We are heartened by polling of British Jews which shows widespread unease with Israeli policy towards the Palestinians, with a large majority believing in the necessity of a two-state solution: this implies there is broad demand for a new discourse, and we want to foster that.

Anyone lucky enough to have been on one of Yachad’s eye-opening trips to the occupied Palestinian territories will have met with the fantastic Palestinian activists, who are not affiliated with Fatah or Hamas, but are committed to nonviolence and a peaceful solution despite the violence with which they must contend (from the Israeli military and the settler movement, but also including pressure and occasional hostility from the mainstream Palestinian political factions). Thus, far from starry-eyed liberal/lefty idealism, #PartnerstoPeace is a practical step based on genuine dialogue that has taken place on the ground with real activists. We are questioning the prevailing narrative that there are no partners to peace, not because of a naive faith that they must be out there, but because we have met them in person! Our campaign aims to highlight these aspirant partners for peace and lend them our support. Violence thrives in a climate of despair: while £8000 for the Holy Land Trust is not going to bring forth a peaceful two-state solution in 2017, we hope it can be the beginning of a new consensus, an optimistic one fostered by hopeful young activists like ourselves and our partners in Palestine, which can end violence and provide a pathway to justice and peace.

You can donate towards our fundraising efforts here.