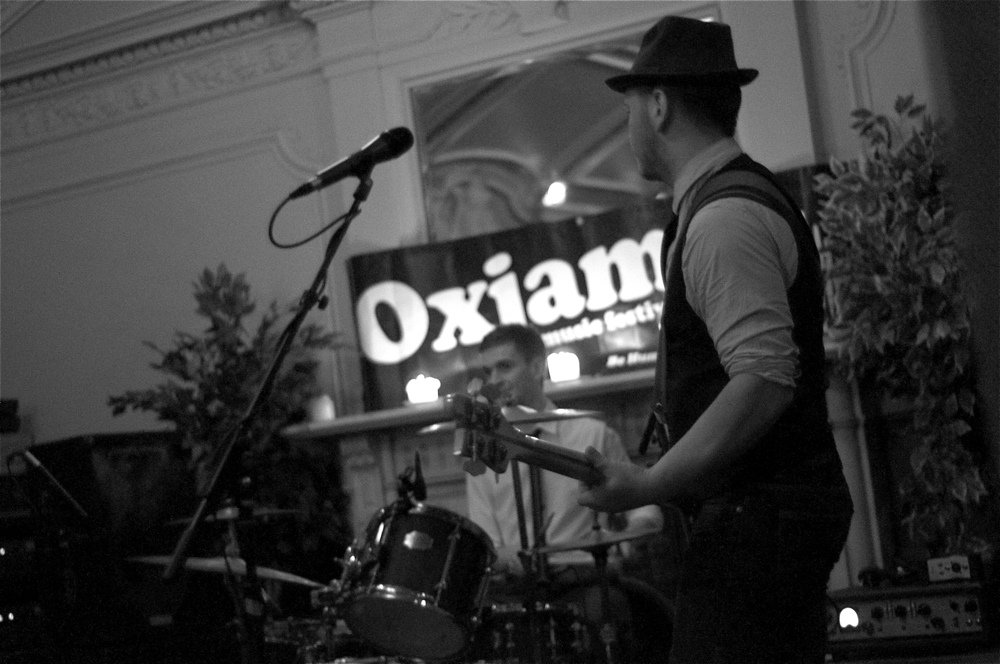 Durham Oxjam promises to be a great night with an ethical purpose.

Living in a fast-paced, metropolitan society, it is often easy to shift our attention onto ourselves, adopting a sort of tunnel-vision in order to survive in a social Darwinist society. We pounce on career opportunities and lollop towards materialistic gains so routinely that we forget to put things into perspective; there is a bigger world around us and in the face of things, maybe a missed deadline or a frustrating relationship is really not the end of the world. Sometimes we need to stop and appreciate the friends and family around us and the many opportunities we are given, to learn to count the things we already have and not only the things we want to have. To use the age-old cliché, to realise just how lucky we are! Appreciation comes in many forms, and for one night on the 22nd October at the Durham Student Union (DSU), music and charity come together to give you an unforgettable night out: Durham Oxjam 2011.

For a month, Oxfam – an established UK charity working on a global scale – hopes to remind people of the power of compassion through the voice of syncopated beats, soulful acoustic, sleek synth or straight up rock and roll. Oxjam is a month-long collective of gigs happening across the country. It hopes to raise both money and awareness for the causes Oxfam supports on a global scale. Gigs help promise a good night out which is accessible to a wide audience and also encourages up-and-coming talent from the local area.

It all kicked off in a London Oxfam shop with Fatboy Slim, Kissy Sell out and Man Like me all playing at the 2011 launch. In Durham itself, Oxfam Soc. in collaboration with the University’s Alternative Music Society, hopes to suspend the mechanical rotations of our daily routine for just one night to allow our spirits to soar through music, reaching out to the hungry in the world. Since 2006, over 3000 Oxjam gigs have been held around the UK, raising more than £1.5 million. Music weaves a net of unity and, as one of the band members of Edinburgh’s Oxjam puts it so aptly, “Music has a knack of bringing people together, that’s how Oxfam should be supported – collectively.” For us students, some will be reminded that there is more to music than the blaring pop-charts we hear at Studio or Loveshack and for others, we hope the notes will sink a level deeper to rekindle the spirit of helping others who are more vulnerable in the world.

Oxfam is committed to, “working with others to overcome poverty and suffering,” on a global scale. Poverty is wide-spread and real, but being so far away from it all, especially in Durham, tucked away in a quaint little city with stunning scenery it is easy to tune out poverty or avert our gaze over campaigns and posters because of the mentality that, “there is nothing we can do about it.” We can change this apathy. Through fund-raising and campaigning we can at least raise awareness that the world is not as rosy-coloured as we thought or hoped.

Oxjam also plays its part in raising awareness of global campaigns. This year Oxfam launched a GROW campaign which endeavours to fix the inefficient food system. Its four main issues are land grabs, food prices, climate and small-scale farming. Land grabs are secretive deals formed by Trans National Companies (TNCs) and governments that buy and invest in large pieces of land in developing countries. This forces farmers and their families to evict from their land. This is often done violently and leaves the farmers with no method of growing food or essentially, living. Rising food prices are also squeezing the poor, with 925 million people hungry every day. Situations will worsen as Oxfam predicts that that cost of crops will increase by 180% in twenty years. With global warning and increasing government environmental protection measures, we recognize that climate change is more alarming than ever. Oxfam’s climate campaign is about reducing poverty through creating conditions so people can thrive despite disasters. Finally, small-scale farming aims to supply farmers with the land, equipment and skills needed so they can make their own living.

These campaigns are by no means exhaustive, but they are the most immediate issues the world is facing, and the ones Oxfam is addressing. Durham University’s own Oxfam Society not only hopes to contribute through fund-raising and campaigning, but also strives to include as many students as possible to Oxfam’s global mission so everyone can realise the potential and possibilities we can achieve as one.

So whether it is to ease that conscience, rave for those bands, support your friends or simply to enjoy a good night out, come along to the DSU at 9pm. Our sets include Tim and Sam, Violets and Avast! Narwhals and more of Durham’s most well-known bands. Dale Bihari, co-president of Oxfam Society said: “This year Oxjam is going to be huge, with lots of fantastic acts lined up, there’s definitely something for everyone. It’s going to be a night you don’t want to miss.” Tickets cost just £3 in advance from the DSU or £4 on the door. Oxjam 2011 promises to be an unforgettable night out that rings with purpose. It is truly music that lasts and impacts generations and brings music with true meaning – and it’s going to be a lot of fun!