Music with a Difference: Meet Me in Winter. 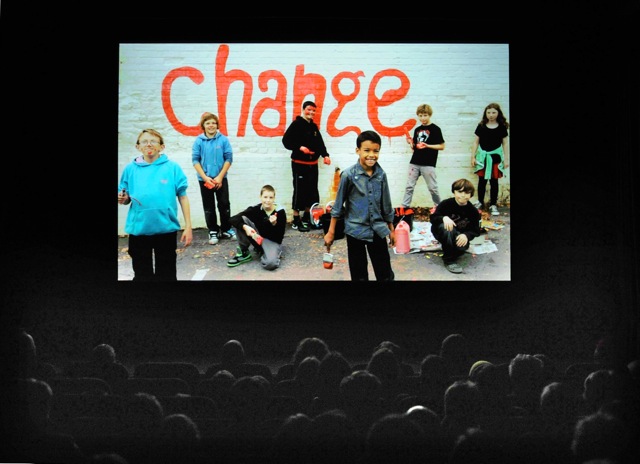 Meet Me in Winter demonstrates that music can make a difference.

Over the past few months, in the cosy town of Wotton-under-Edge, tucked away in a valley in the Cotswolds, a community have come together to create a song with the aim to make a difference. The song, Meet Me in Winter, was sung by local ameteurs of Wotton, produced by Ian Dean (George Martin, Paul McCartney, Evelyn Glennie), features musicians such as Jim Barr (Portishead), was directed by Alberto Bona (Jamie Walton) and was mixed at Hackenbacker Audio Post Production by BAFTA award winner, Nigel Heath (Downton Abbey, Spooks). Meet Me in Winter has slowly been gaining national interest, and has even been rumoured by some to have what it takes to clench the Christmas number 1 top spot. The song is available on iTunes now, and will raise money towards the charities Shelter and Mind, as well as helping to reopen the local youth centre in Wotton. The full video is available to watch on Youtube, simply search for “Meet Me in Winter”.

The person who created the idea of Meet Me in Winter is Katie Elliott, someone well known in Wotton for always being involved in local events. She was recently diagnosed as bipolar, and during the freezing February of 2010 found herself wondering out into the snow, without having dressed for the weather, and not knowing where or why she was going. At first she was embarrassed to speak about her ordeal, as she was worried what people might think. However, when she did finally begin to open up about her experiences she was astounded by the support she received from those around her. Not only that, but she found she was not alone, and found many people opened up to her about their own experiences.

Such a reaction inspired Katie, and made her wonder just what it was possible to achieve with this kind of community spirit. She rallied the help of local musicians from Wotton-under-Edge to sing the song she had written alongside lyricist Anthony Marks, and then slowly got more and more of the town involved in the video and the promotion of the project. The project has been run on a very low budget, so much of the project’s success has come from the kind of supporters of the project offering their help in creating the final song and video, and then spreading the word about its release.

Meet Me in Winter are now keen to get people from across the world involved in the project. They are asking musicians, of any age and ability, to video themselves performing their own versions of Meet Me in Winter and submit them to the web page. These will then be taken and used to create a montage of different versions. Anyone can get involved, so if you fancy it, do look up the website: www.meetmeinwinter.org

The Meet Me in Winter crew have also organised flashmobs, with a number of the original singers travelling to London a couple of weeks ago and singing in many well known places, including Nelson’s Column, and the Apple Store in Covent Garden. The following day a massive 166 national news papers and news websites covered the story of Meet Me in Winter. This will build up to a global flash mob, scheduled to take place on 27th December, I’m not sure what this involves as the details have not yet been released, but have found myself very much intrigued!

Shelter – The housing and homelessness charity.

Founded in England in 1966 (and 2 years later in Scotland), Shelter’s aim is to help put a roof over the heads of those people who struggle to find and keep a home. This doesn’t just mean helping those who have ended up living on the street, but also those stuck in undesirable housing situations. When it was first set up, Shelter’s aim was to help those living in slums in England’s cities. At this time many were forced to live in overcrowded hostels, and landlords were notorious for charging extortionate rates for awful living conditions. Today, Shelter provides information for those struggling to find housing, as well as campaigning to alter the current housing laws, which will hopefully ease the pain caused by the current housing crisis. Many people are stuck in temporary and rented accommodation, unable to enter the housing market due to lack of affordable housing, and as the average age of someone entering the housing market creeps higher and higher, graduates can surely expect to find themselves among these people. Meet Me in Winter has chosen to support Shelter in the hope that they can provide shelter to those who need it over the cold winter months, letting these people celebrate Christmas and start the New Year in comfortable accommodation, without the stress of worrying about where they can live.

In light of Katie’s experience, it is unsurprising that she has also chosen to support Mind, the leading mental health charity in England and Wales. 1 in 4 people will experience mental health problems this year, and because mental health conditions are not apparent from the outside, they often go unnoticed or are misunderstood. Mind’s aim is to help these people to understand their own condition, as well as raising awareness to improve the support that these people receive from those around them. By raising awareness, Mind also hope to reduce the stigma associated with mental health problems, and as a result reduce discrimination of those suffering. Alongside this, Mind are campaigning to improve the standards of professional care for sufferers.