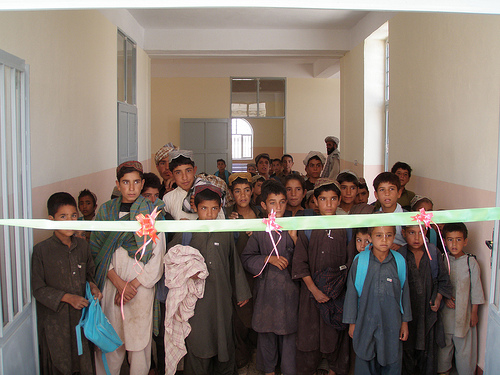 New schools for Afghanistan – no Taliban in sight!

“A new year, a new you” for besieged and beleaguered Afghanistan? Not likely. 2011 will see a fresh onslaught of doom-laden headlines bemoaning the innumerable, and intensifying, headaches that plague the country. We will be hit with news of spiralling struggles with the drug trade. We will furrow our brows at the apparently weak central authority and widespread corruption. We will stand alarmed at the violent power struggles in the tribal areas, and (the icing on the powder-keg) continuous American drone attacks wreaking destruction and mass casualties.

The media carnival that envelops the country can confound public understanding; the sheer amount of coverage eclipsing the facts rather than elucidating them. Perhaps it is easier for the public to turn away from this tangled nation than to struggle through the weight of reportage and history? Not only is Afghanistan vast, but its geopolitics is incredibly complex. The country can seem abstract on the screen as in the news; a distant and Goliath war-zone. Rory Stewart, a Conservative MP who trekked across the country from 2000 to 2002, concluded: “The more time I spent there, the less I understood.” If an experienced commentator is left so befuddled by the region, what hope does the fast-food, fast-information (tweet me all I need to know in 140 characters or less) generation stand? There is a tongue-biting, fist-clenching level of indifference: a recently leaked CIA document was titled “Afghanistan: Sustaining West European Support for the NATO-led Mission – Why Counting on Apathy Might Not Be Enough.”

In the words of a Dalai Lama from history (the particularly pithy number XIV),”Where ignorance is our master, there is no possibility of real peace.” There can be no room for misunderstanding of or apathy towards a country which will continue to act as a determinant in global politics. The aim of this section is to share knowledge both of this vibrant, particoloured nation – addressing not only its problems, but its culture and identity beyond the battlefield. I will also address the work of the Afghan Appeal Fund (AAF) which is to be supported by several exciting fund-raising events in Durham over the next few months.

The AAF is a charity set up by family and friends of British soldiers in the country whose goal is to support Afghan citizens, especially kids, who live in one of the most volatile environments in the world. Caroline Richards, wife of General Sir David Richards, launched the imitative after seeing pictures of Afghan children studying in schools crumbling around them (in the literal, physical, tattered tents and disintegrating mud-walls sense of the word, not the Conservative manifesto lingo). Since 2007, the charity has financed the construction of schools in various provinces, including Bamyan, Nuristan, and the notoriously dangerous Helmund.

The AAF is no colonial pet project, however. Local labour is employed in the building work, and local teachers are trained and recruited: schools run on Afghani principles, not Western models. The long-term goals of the enterprise are to restore infrastructure and promote stability in the area while demonstrating a positive facet of British presence amidst the shadow of the drones circling above. Ideally, that might dissuade local people from aligning with the Taliban. “Winning hearts and minds” is the deceptively sinister buzz-phrase. A stronger environment is less open to manipulation by the Taliban, who sweep into areas with golden promises: Taliban law and order may be a brutal and intolerant system, but it fills power vacuums.

“If the Apocalypse is imminent,” Vice magazine reported recently, “it will most likely begin in Afghanistan or neighbouring geopolitical time-bomb, Pakistan.” We need desperately to fix up, look sharp, know what the deal is, and what we can do to help. With the Afghan Appeal is coming to Durham, we will be given the opportunity to pierce the bubble and learn about, and hopefully make a small difference to, one of the most troubled, and most interesting, places on Earth.