It Happens Here: Raising Awareness of Sexual Violence at University 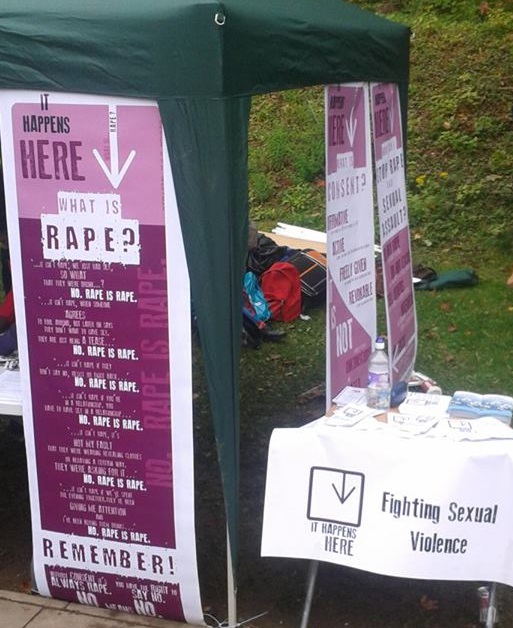 It Happens Here is a campaign run by students; for students, aiming to raise awareness about the issues surrounding sexual violence in the university community. As an organisation, we are aware that everyone reading this will know that rape and sexual abuse exist and are a huge problem, but through both our time here and our work in this area, we have found that awareness of sexual violence, beyond its existence and severity, is sometimes really limited.

With an NUS survey estimating that one in seven female students will experience a serious physical or sexual assault during their time at university, and furthermore, that one in four will experience sexual violence in general, we would have hoped that what constitutes sexual violence would be a key area addressed in inductions at the university – unfortunately for most of us, this wasn’t the case. One of our supporters told us that she came to university with “pretty much zero concept of the prevalence of sexual violence” whilst also still believing the “stranger rape myth”, when, in reality, almost 90% of rapes are perpetrated by someone known to the victim. She was not provided with information from the university to challenge these ideas, and now says that it is only through having “encountered and witnessed sexual violence in many forms” herself that she is aware of the reality of it.

We all hear myths and stereotypes about sexual violence from a young age, so our campaign isn’t about shaming those who do or have believed them. Instead, we firmly believe in raising awareness of the realities of sexual violence, in order to provide support for students who experience sexual violence themselves, and help students who may end up supporting a friend who has had such an experience. One supporter told us that during her first experience of sexual violence, she wondered “if this was what rape feels like” because of the pain and terror of physical injury as she was unable to stop what was happening, but that afterwards she felt ashamed for undermining “actual” rape victims because she knew the perpetrator and had consumed alcohol. We certainly don’t believe that more awareness would erase the trauma she experienced, but we do think that if we create a culture where stories like this can be easily told and believed, survivors will have more options.

When we asked around to find out what information students got on sexual violence in the induction this year, one student came back to say that there was no discussion but that the only mention of the subject constituted a warning to students to watch their drinks on nights out. We know that drink spiking has been a big problem in the university community, but we do not condone attempting to solve this with simple “safety advice”, when so many students don’t get information on the fact that drink spiking is a crime in and of itself, and aren’t given information about Rape Crisis and other local services in their inductions. We know that the conversation about rape is a difficult one to start, but it is essential, and for those of us who have lived through rape and supported those who have, it feels well overdue. Denial isn’t helping – in the words of another supporter “rape not only happens here, but thrives in an environment where people are so ignorant about it”. We would like to work with the university to institute a coherent policy on how to support survivors of sexual violence, mandate training for all staff involved, and start more extensive collaboration between the university and local services.

Surviving sexual violence throws up multiple issues, some of which are universal and some of which are specific to the student community. For example, in such a small community, if a student knows the perpetrator of an assault, contact will be difficult to avoid even if they try to cut ties, which we know is incredibly difficult. Can you imagine bumping into the person who assaulted you in the queue at Tesco? It is no wonder that many survivors of sexual violence find that their studies are interrupted and that it is very difficult to remain at university. Supporting survivors helps the whole community. As the impact of sexual violence is ongoing, our focus shouldn’t be limited to assault or abuse which has been perpetrated at university, as an assault may well affect many students and their studies, even if it happened before their time at university.

During a conversation with survivors of sexual violence, we thought about what the overall message of this article should be. Our conclusion was “myths, and how they affect the first response of the people we tell”. Disclosing an experience of sexual violence can be terrifying, and make the survivor feel incredibly vulnerable no matter how close the relationship is or how safe they feel. Unfortunately, responses are often far from useful or even adequate. Often survivors are asked multiple questions about their behaviour and what they did, which makes the perpetrator invisible and only serves to exacerbate the sense of self-blame they may well already feel. From both our personal and professional experience, we have discovered that “but they have to say no” is an incredibly common myth – some people even think this is a legal reality! The statutory definition of consent includes no requirement to vocalise a “no”, and multiple reasons may prevent someone from doing so, from incapacity due to intoxication, to terror of being further harmed, to simply the fear that saying “no” will make it worse.

Another myth is that sexual violence is limited to women. While as a campaign we recognise that the large majority of victims of sexual violence are indeed female, and that this type of violence is on a wider scale gendered, we aim to raise awareness and gather support for male survivors in equal measure. We believe that more information and awareness is the answer to reducing the influence of these damaging myths – for many of us, a recognition of our own assault and beginning to reduce the self-blame we felt around it, came when learning about the stories of others and realising how similar our experiences were.

So – what have we done so far? If you have not seen us yet, hopefully you will soon – we were at the Durham University Freshers Fair and we will be dropping off flyers around colleges in the near future. We also hope to pop up around campus later in the term to chat to all of you about what direction the campaign should go in and what you need from the campaign.

We believe that the experiences of survivors and activists are a hugely valuable resource – some of you will have read this and will already be very much aware of these issues. If this is you and you would like to help, drop us an email! We are just a group of students who feel strongly about the issues and want to help others – we are run by and for survivors and those who support them, either directly or through activism and raising awareness.

If you would like to contact the It Happens Here Durham organisation directly, to get involved, seek advice or obtain information on services which offer support for survivors of sexual violence, please send your email to the following address:

Alternatively, if you would simply like to learn more about the organisation, please use the following mediums:

Tumblr: ithappenshere-durham.tumblr.com (to submit your thoughts and experiences)