It’s easy to become cynical nowadays- even simply because of the 24/7 access to bad news from all over the world. Therefore, you can lose sight of victories that mean the world becomes a better place for everyone. Recently, Amnesty International and the WHO have published articles detailing some of these victories, and I shall outline a few of the most important ones. 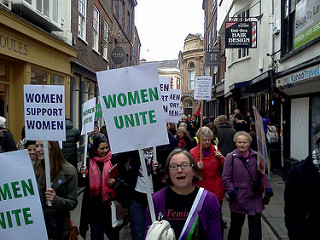 On the 20th of January 2017, Donald Trump was officially inaugurated as the 45th President of the USA, much to the disapproval of many people throughout America, not to mention across the whole world. This is due, in part, to derogatory words and policies about women, immigrants, LGBT people, the list goes on.

As a result, huge numbers of people turned out to show support for others, with an estimated number of marchers being just under 5 million. Protests were held everywhere from Moscow to Antarctica. The purpose of the march is ‘to harness the political power of diverse women and their communities to create transformative social change’- and the movement certainly had an impact on the people who were both for and against it.

Marking a year after the inauguration, marchers once again took to the streets last weekend to show a continued protest against the ‘leader of the free world’.

Another major demonstration for equality and justice also took place in the last year, #MeToo. As a result of allegations about Harvey Weinstein, a prominent figure in Hollywood, many people across industries gave accounts of sexual assault and harassment. This is an important step forward to hold people accountable for their actions and make everyone feel safe in their work.

In Brazil there was an outbreak of yellow fever this year, a disease spread through mosquito bites. As a response, the World Health Organisation (WHO), in collaboration with other international agencies, deployed 3.5 million doses of the vaccine.

In March, there was a synchronised vaccination programme against polio in Nigeria, Niger, Cameroon and Benin. Polio mainly affects children under 5 and there is no cure, just means of prevention via the vaccine.

Yemen was another country to work to prevent polio, with nearly 5 million under 5-year olds being vaccinated in the war-torn nation.

Front Line Defenders, an organisation dedicated to the protection of human rights activists, reported that in 2017 there were over 300 killings of activists. This figure makes some peoples’ stories more remarkable.

For example, the winner of 2017 Front Line Defenders Award- Emil Kurbedinov. He is a human rights lawyer who defends Crimean Tatar people, a persecuted minority, and documents rights violations during raids and searches.

Another individual is Karla Avelar. She is a transgender woman who has survived unbelievable hardship- including being shot nine times and going into a two-month coma, and being sent to jail for self-defence. In El Salvador, she works to improve LGBT rights and for those with HIV. Here’s an interview with her:

There’s lots of groups here in Durham if you’re interested in human rights, for example Amnesty International. Collaboration can be a very powerful tool for making a difference!