“Have poison, you have no right to live.” 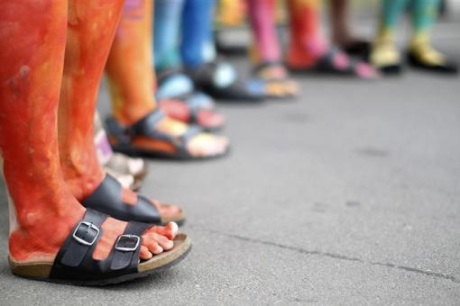 The LGBT community in India.

(Have poison, you have no right to live.)

These lines were said to someone who is a transgender female. I was stunned when I heard this line during my fieldwork in India. I was attending a meeting of people with diverse sexualities and gender identities. Today, they discussed about their experiences; the usual behaviour that is meted out to them by their own family, at a workplace or when they are walking down the streets.This statement and the other things that I heard today disturbed me a lot. They keep coming back to me and even as I write, the discussion is being re-played in my mind and I remember the tone and the expressions as they shared the horrific truth of this society.

The person who had faced this suggestion to take her own life was very disturbed and kept demanding for a solution. She narrated how once someone at her workplace got to know that she is not a male, the teasing, the verbal abuse and harassment started. I noticed the way she was trying to give out the details, she felt uncomfortable, with a sense of humiliation and disgust and it reminded me of my own self when I had tried to confide details of any eve-teasing or harassment that I had faced. I kept staring at her for some time. I felt disgusted but with my own self because I am myself a part of the society that has discriminated against them and yes, I had also supported the discrimination.

There was another person who talked about the problems that she was facing in her family. It involved verbal abuse, words or expressions of disgust and physical harassment. There was again a sense of humiliation that she was undergoing, yet I also felt that it was something that was very usual for her.

This discussion was mainly centred on the problems of these two people and other people were trying to give suggestions based on their own experiences. Some of them asked them to compromise with their identity and behave like “men”. To which one person lashed back, “Agar mujhe female ki tarah dress karna hai, toh kisi ko kya problem hai?” (If I want to dress up as a female, what is anyone’s problem?). As she said it, I was reminded of the innumerable times that I say it myself. There was the same pride in her voice that I have, as I say it.

As I wrote this, a thought crossed my mind. I wondered how we were different. We both looked the same, she looked much more “feminine” than I did, with the dupatta and make-up. I was dressed in a more what is considered as “unisexual” attire. But we are different. And I had restored the difference as I had stepped out of the building. As I had stepped out of the building, it was “us” and “them” again. I had stepped out in the world where I have more rights and privileges than her and where I can proudly present my identity as a woman whereas she will have to hide her identity, the dupatta, the make-up will be done away with and she will step-out as a “man”.

They all discussed their own stories, day-to-day experiences and I was surprised that as they narrated, they would never glance at me. They were not conscious at all. And it was because it was nothing “extra-ordinary” for them. Even as they would sometimes mock at each other, I did not try to join them in their laughs as I was too conscious that maybe my laugh would be taken in a negative sense. I was too conscious and perhaps also guilty. I felt guilty of my own identity. I forgot the struggles that my womanhood faced and thought about them. Yes, I was also their culprit. I belonged to the society that thought they were “weird”, “unnatural” and mocked them. At the back of my mind, I also know that they will talk about me and probably think that I also came to check on “their” community. They have little hopes from me, I know. They would probably also think that I will also never understand their position, their situations and would pity them.

We think they are “different”. But are they? The difference lies in their gender identity, their self-perception, their preferences. But is it really about their preference or the way “they” perceive themselves? Are the genders and sexes really two? Is that the biological reality? A fact of nature tells us that transgenderism, homosexuality, hermaphroditism and other forms of alternate gender identities and sexualities exist in animal species as well. Male bats have a huge tendency for homosexuality. A more known fact is about hydra which is clearly hermaphrodite.

So how is it unnatural as many have claimed? Works of social scientists have shown alternate sexualities and gender identities to have been deeply woven into the political, social and economic fabric of societies across the world. But even if we do not get into the social and science part of the debate, let’s think from a human perspective.

They may be “different” but aren’t they still human beings? Do we have any right to humiliate them? They do not harm us in any way so why does their existence cripple our minds so much? They are not “cursed” or “sick” or anything. They are as much as a creation of God as we are. Why does their private life matter so much to us?

I watched them as they sang and danced and I saw that as they danced, they did not care about anyone. They did not look at anyone but just danced. The movements were very free, there were no boundaries. And I felt the power of dance. How symbolic it can be…