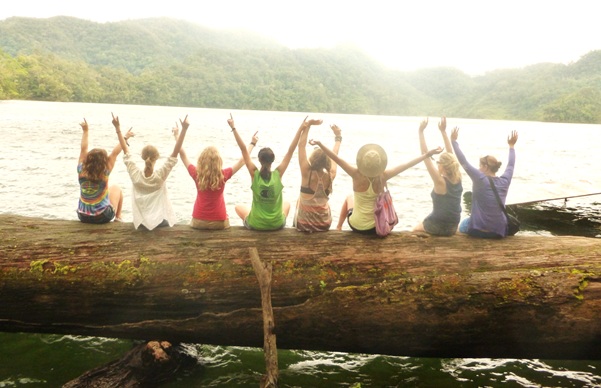 The volunteers at Coral Cay Conservation

Coral Cay Conservation is an organisation that operates across the world and strives to improve and protect the habitats of coral reefs and rainforest environments. This summer I was lucky enough to work for them at their base in Southern Leyte, The Philippines for 5 weeks and learn all about coral reef conservation.

After a 48 hours of travelling, which involved a car, a train, 2 aeroplanes, a jeepney, a taxi, another plane, a van and a motorcycle ride, I finally came into contact with Napantao – the village where I would be spending the next 5 weeks of my life. It sounds bad, but being white over there kind of makes you a celebrity. You’re constantly saying hello or “maayong buntag” (good morning in Visayan), smiling, waving and just generally lapping up the attention… And despite the widespread poverty and extremely basic conditions, every single person I met was unbelievably happy and really comfortable with their own life.

Talking about being comfortable… you would be surprised by how quickly you become accustomed to things like not having running water or clean clothes or even just not being covered in insect bites. The “base” that the Conservation runs on is extremely basic and practically just a concrete shell of a building. It does the job though, and with a bit of brightly coloured paint, hammocks and house pets, it soon felt like home.

After a couple of days spent with Greg, the chief SCUBA diving instructor, my qualifications were approved, PADI course up to date and I was ready to start actually helping out with some conservation work. CCC trains all of it’s volunteers in something called “Reef Check”. This is an international qualification which allows people to leave the conservation, able to recognise indicator species of coral, fish, algae and invertebrates. This knowledge can be used to fill in surveys around other parts of the world to help build up a global database on the conditions of coral reefs. Not only did reef check need to be completed, but an additional 62 fish species, 35 types of coral, 44 invertebrates and 26 types of algae had to be remembered to a 95% success rate before we were allowed to do any type of surveying in the local area. Luckily though, an MPA (Marine Protected Area) is situated less than 20m away from the shoreline that the conservation sits on. All of the practice dives were done here, where life is thriving and you can often see all of the species on one dive. Not only that, but turtles, jellyfish, octopus and sea snakes often made an appearance, which was pretty awesome.

Taking on that amount of information in such a short space of time was a massive struggle – especially as the area was affected by typhoons in the middle of the second week. We had to “button down the hatches” in a sense and lock ourselves up for a few days. Although it was disappointing to miss out on diving for a while because the sea state was so bad, the storms we witnessed were absolutely beautiful and really gave you the sense of being connected to nature on a whole new level.

Weather wasn’t the only barrier standing in the way of getting qualified either! Classic Brits going abroad meant that everyone got ill. A sickness bug went around nearly every person working at the conservation, but strangely it seemed to affect everyone differently. Unfortunately I was subject to it, and spent 3 days in bed with the worst headache of my life. My vision was blurred and when I closed my eyes, my balance was completely off. Luckily it was just a phase and everything was back to normal within a couple of days.

So finally, when the weather was calm, the sickness had gone and we’d learnt all about the different fish, we were able to learn how to actually complete some surveys. CCC do a number of different types of survey to collect information. A “baseline” survey is the standard one that is most commonly used. This is when 4 divers go down together, lay a 250m “baseline” perpendicular to the shore and swim along it in 10m sections. One person marks down fish species/populations, another does corals, another algae/inverts and the last person is in charge of taking salinity samples and holding the SMB (Surface Marker Buoy) which tells those on shore exactly where the divers are. Once this data is collected and recorded, you can move on to the next 10m section with your team. Most dives last around 45minutes and you could cover about 3 sections in this time once you got into the rhythm of it. When back on shore, the data was inputted into a database to build up a picture of which areas within the bay are popular with certain fish species, which have the right conditions for coral to grow etc etc. Other surveys are then used if you want to go back and monitor an area which has already had a baseline survey. These sites are carefully selected to establish whether or not the area is degrading or improving in health.

So when all of this information is collected, what is it used for? Coral Cay works with local people and tries to introduce them to the concept of sustainable livelihoods. In particular, the charity works with fishermen to introduce certain areas of the bay which are “marine protected”, i.e. they cannot fish, but other areas where fishing is actively encouraged. The conservation also has a strong education movement, where regular visits into local schools teaches children how you shouldn’t allow dynamite fishing, or throw rubbish into the ocean, as this will harm the fragile ecosystem and will eventually affect them. While I was there, I was lucky enough to be part of the local town’s annual festival. CCC ran one of the days which had an “Environmental focus”. The rest of the volunteers and I put on some talks and activities for local people to get involved with; which included planting trees, litter picking and a trial snorkel. The whole day went down really well and was finished off by a big music concert in the evening. It was an amazing way to be introduced to Filipino life and culture, as well as feeling though I really gave something back to their community.

So as expected, those 5 weeks absolutely flew by and before I knew it I was packing my bags to head back to a very wet England. Looking back, working for Coral Cay Conservation was not only one of the best adventures of my life, but also gave me a sense of enormous pride and happiness that I was able to be part of something that really mattered.

If you want to dive into conservation volunteering too, then have a look at the Coral Cay website: www.coralcay.org