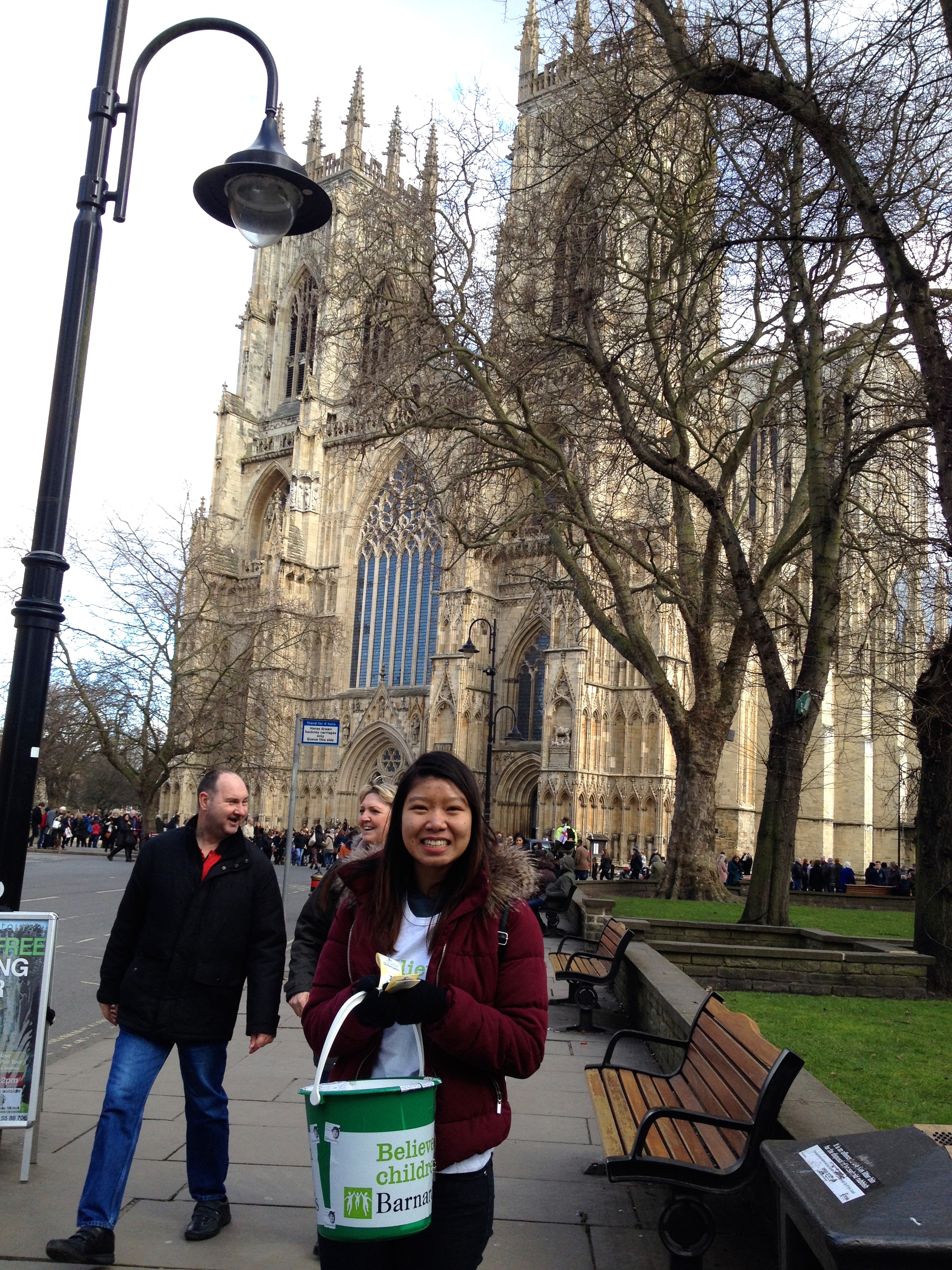 The beautiful city of York was home to this fundraising for Barnardo’s.

As the time before the DUCK York RagRaid for Barnardo’s decreased, my trepidation grew and my excuses not to go multiplied, so it is with some surprise that I now feel the urge to write about it to convince others to take part. I must admit that charity initially played little part in my joining the RagRaid, and nor did I have any particular desire to get up at 7.30am on a Saturday for a 2-hour bus journey – I was rather motivated by wanting to see York.

This being so, the cynicism towards charity workers on the streets is easily understood, and I felt extremely self-conscious with my enormous bucket which silently screamed “I want your money” at passers-by. Having never attempted to fundraise like this before, my friend and I were unsure how to start – we initially tried approaching people in the street, and while this was sometimes successful, it resulted in a series of soul-crushing rejections. Morale dropped fast, particularly after somebody spat on my friend’s jacket before scuttling off into a crowd. We soon considered that the more expensive high street might not be the dwelling place of York’s most generous residents. We also fled our next destination – a large, busy square – after being angrily informed that this was somebody else’s hunting ground who did not want us competing with him. I wanted to point out that, having raised roughly one pound by this point, I felt about as competitive as a blobfish in a thumb war, but it felt like a losing battle so we headed off.

Meandering as unthreateningly as possible around the cobbled, winding streets of York, our luck began to turn in tandem with our mood. Around the smaller shops and markets people tended to be far more generous, often approaching us to donate without coercion, and by the time we arrived at the cathedral where we could eat our packed lunches we had started to feel considerably more positive. People would often thank us for raising money for what is well known to be an extremely good cause, and York, as a city, far surpassed my expectations. Arriving at the cathedral only increased this feeling – as a loyal Durham student I felt that I could act coyly around the cathedrals of any other British city, but the York Minster is spectacular. Our visit coincided with the final day of York’s Viking festival, and around the cathedral and much of the city people were dressed in full Viking attire, grunting, marching and posturing. We ate lunch whilst watching a clan practice their battle manoeuvres in front of the cathedral, and this entertainment spurred us on to continue.

The momentum we had cobbled together towards the end of the morning had somehow grown over lunch – perhaps fuelled by the squashed tuna mayonnaise sandwich we had eaten – and we suddenly felt like weathered professionals capable of smiling graciously and knowingly, with just the right amount of barely-noticeable-but-definitely-there disapproval at all those who chose not to support our cause. Perhaps this change was perceptible to potential donors, as we shortly found that a more passive approach could be highly effective when combined with good tactics. We realised that a big grin on a small street could go a long way, especially with high footfall and jolly sunlight, and as the day ended our grins had increased in size such that there was hardly room for the hundreds of pedestrians to squeeze past them without donating. Our permits expired at 4pm and the collecting ended on this happy note, leaving us free to explore for the remaining hours, but it was the final donation that made my day. As we passed through the square in which we had previously been shouted at, a faceless voice hailed us loudly. I turned, expecting another confrontation from the same person, but it was a homeless man. When we approached he explained that Barnardo’s had helped him before, and as he was saying so he dropped some coins into our buckets. It was wonderful to have the charity’s work validated in such a way and this polished off the day beautifully.

As we whiled away the evening eating in a York chain restaurant that made delicious pulled pork sandwiches, we reflected on the day and agreed that to come had been an excellent decision. Aside from having seen a lovely city, we had been pleasantly surprised by the generosity of some people and felt warmer and fuzzier towards our fellow humans than we would care to admit. To anyone undecided about attending a RagRaid, I would highly recommend it. The more cynical you are the better – you’re highly likely to be pleasantly surprised by the uplifting charity experience.