Cancer Research UK: New Weaponry in the Fight against Cancer 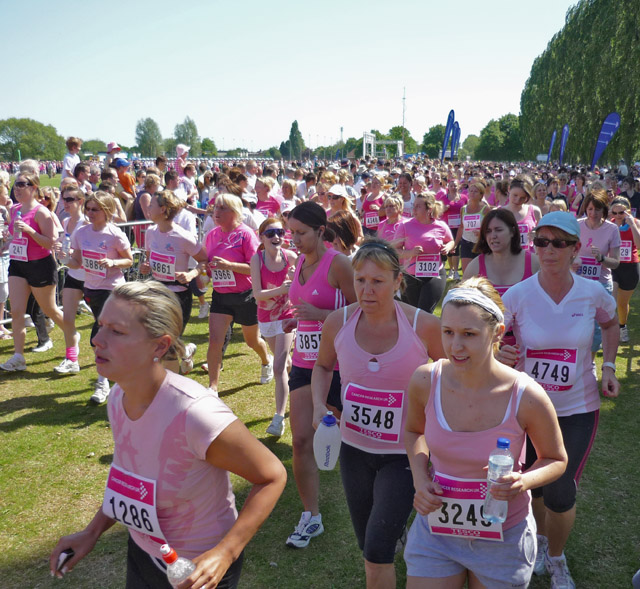 Every two minutes someone in the UK is diagnosed with cancer.

Whilst we have all heard of cancer and panic at the sight or sound of the word, can we really say that we know what cancer is? Yes, it’s a potentially life-threatening disease which can grow in any part of the body, but apart from that, are we really aware of the nature of the disease that took 157,275 lives in the UK in 2010? If the answer is ‘no’, then now is the time to clue ourselves up on this condition, in order to fight it more effectively and win.

Cancer occurs when the DNA contained within the nucleus of a cell is damaged or changed to such an extent that a mutation is produced. This mutation causes a cell to continue doubling beyond the fifty or sixty times it should and to form new cells that are not needed within the body. These extra cells consequently form masses of tissue called tumours. However, not all cancers are restrained to growing within the primary tumour they produce. Secondary cancers occur because cancer cells lack surface molecules which keep normal cells in one place, allowing cancerous cells to travel through the bloodstream and lymph channels to other parts of the body. Unfortunately, the potentially lethal problem with cancer cells is that they can secrete chemicals which inactivate lymphocytes (cells from the immune system) sent to destroy a mutation, leaving the body unable to fight off cancerous cells adequately.

Yet, in spite of all these complications, colossal progress has been made as scientists have continued to develop new methods of treating cancer. From surgery and cryotherapy to hormone therapy and radiotherapy, doctors and scientists are fighting cancer on a daily basis. And it seems they are starting to win. Whilst cryotherapy utilises extreme cold to destroy cancer cells, radiotherapy takes either an external form, which uses gamma or X-rays to annihilate cancer cells, or an internal form, named brachytherapy, which places radioactive liquids or metallic seeds into the body to release high doses of radiation to concentrated areas of cancer. In contrast, chemotherapy is not localised, which allows it to travel through the bloodstream to destroy cancer cells throughout the body and prevent them spreading.

However, some of the most exciting and effective advances in cancer treatment have been discovered by the leading UK cancer charity Cancer Research UK. The charity has been instrumental in developing the extremely promising drug Tamoxifen, which can halve the risk of women dying from the most common type of recurring breast cancer if taken for ten years instead of five years. Furthermore, during the last 40 years of the 113 years that Cancer Research UK has been running, five year survival rates for invasive brain tumours and bowel cancers have roughly doubled, whilst this figure has tripled in leukaemia patients. Moreover, survival from ovarian cancer has almost doubled, whilst eight in ten women now survive breast cancer beyond five years, compared to just five in ten in 1970. Clearly, Cancer Research UK is producing life-saving results. But these results are threatened by lack of funding. However, there are most certainly opportunities to change that and allow Cancer Research UK to continue their vital research into cancer.

One of the most popular events used to raise money for Cancer Research UK is ‘Race for Life’, which involves volunteers signing up at a fee of £14.99 (for adults aged sixteen and over) and being sponsored to walk, run, jog or even dance through one of the 230 five kilometre or ten kilometre races held. Contrary to myth, ‘Race for Life’ does not only raise money for breast cancer, but for all 200 types of cancer. Furthermore, whilst the main event is for women only, men can get involved by helping to set up and marshal the obstacle course used in a new event called ‘Race for Life Pretty Muddy’. Another new event is ‘Race for Life Twilight’, which holds five kilometre events for two weeks in the early evenings of mid-October.

However, for those who think they are not quite ready for the physical challenge of a five or ten kilometre walk, there are still huge contributions to be made. Tesco has been the partner of ‘Race for Life’ for twelve years and makes donations towards Cancer Research UK every time that ‘Race for Life’ products such as flowers, accessories and clothing are purchased in their larger stores and online.

The progress that Cancer Research UK is making is amazing and by making the smallest of contributions, with either our time or money, we can help fund this remarkable charity. So why not sign up to one of the many ‘Race for Life’ events still open for registration and make a real difference this summer by helping to bring closer the day that cancer is cured?