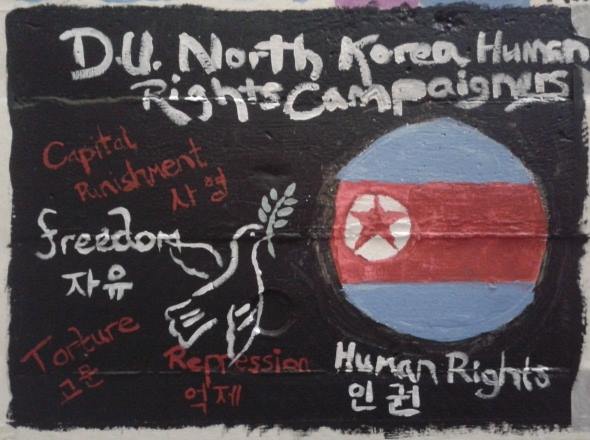 DUNKHRC’s society mural in the DSU

Psychopathic, hermetic, Orwellian, brainwashed, nuclear-crazed…These are the words that will win you a round of North Korea news bingo; try it next time you spot that rare North Korea article in the mainstream media. What sadly gets overlooked under this mass of headlines threatening nuclear war or mocking Kim Jong Un’s less than divine physique, is the country’s horrendous human rights situation; this is even more the case as, with the world focused on Syria and the Middle East, North Korea is pushed further out of the human rights radar. There are at least five political prison camps in the country; these have existed since the 1950s, dwarfing the length of operation of the Soviet gulags and the concentration camps in Nazi Germany. They were created in the wake of the war that split the Korean peninsula and ended in a ceasefire in 1953, yet it was not until March this year that, after years of petitioning, the UN established a Commission of Inquiry into human rights in North Korea.

An estimated 80,000 to 200,000 people are imprisoned in the camps, most for political crimes but others due to North Korea’s guilt-by-association law, which means up to three generations of a convict’s family can be imprisoned merely for being related to the accused. Some prisoners are even born inside the camps, never knowing a life beyond its barbed wire and electrified fences. For them, a life of twelve to fifteen hours of physical labour a day, desperately picking out undigested grain kernels from animal faeces to eat and regular beatings by camp guards is all the world has ever been and will ever be. Besides two “re-education” centres, the camps are “total control zones”, meaning the inmates are never released, condemned to a life of hard labour.

The Commission of Inquiry (COI) has already heard testimonial evidence of infanticide, trafficking, torture, rape, execution, forced labour, arbitrary detention, abduction of foreign nationals, and other human rights abuses which will almost certainly be found to be crimes against humanity when the COI publishes their findings in March 2014.

Yet it is not only in the prison camps that human rights are overlooked; according to the latest UN World Food Programme report, eight out of ten North Koreans suffer food shortages and 20% of under-fives are severely malnourished. Outside the showcase capital Pyongyang, many people suffer chronic malnutrition and several have died of starvation. There are serious restrictions to the rights to freedom of expression and association and, despite its official claim to respect the right to freedom of religion, religion in North Korea is all but non-existent, considering a person can be imprisoned or even killed for having contact with Christianity. For the few that do escape into China (the border between North and South Korea is so heavily guarded that crossing it is simply not an option), there is no respite; China does not recognise North Korean defectors as refugees and if caught they face repatriation, almost certain imprisonment and possibly execution.

This is but a brief overview of some of the atrocities committed in North Korea every day, but it should explain why the Durham University North Korean Human Rights Campaigners (DUNKHRC) was founded. The society aims to raise student and public awareness about human rights abuses in North Korea and to end the injustices faced by the overwhelming majority of its citizens. Our weekly meetings include film screenings, book clubs, guest speakers and debates, and on Wednesday 13th November we are honoured to welcome a North Korean defector to Durham to share her emotional experience of life in and escape from North Korea. After escaping to China and being sold as a wife to a Chinese man, she was arrested and sentenced to a prison camp. The event is a rare opportunity to hear a first-hand account of life in such a little-understood state and all are welcome to attend.

DUNKHRC is linked to the European Alliance for Human Rights in North Korea (EAHRNK), a group of young activists, journalists and academics that aims to create a stronger, unified European voice to speak out against North Korea’s horrendous human rights record. EAHRNK seeks to engage the public through forums and conferences and by publishing records of North Koreans’ accounts of human rights violations. It also encourages the EU and European governments to contribute more to alleviate the human rights situation. Through EAHRNK, our society at Durham is linked to other student groups throughout the UK and we anticipate that joint events will create a louder student voice with which to lobby MPs to raise the North Korean issue in Parliament and at the EU.

DUNKHRC is a new but growing society and our contacts include the first British attaché to North Korea, James Hoare; “Britain’s leading Korea watcher”, Aidan Foster-Carter; and former ambassador to North Korea, John Everard. We host talks ranging from the North Korea’s environmental policies to the ethics of North Korean tourism and our Facebook group is fertile ground for North Korean debate and all sorts of interesting news articles – from harrowing accounts of prisoners’ abuse and rape to how to dress as Kim Jong Un for Halloween! We welcome everyone who is interested in Korea, human rights and helping their fellow human beings, and look forward to the day the North Korean regime is brought to justice and its citizens granted the freedom every human being deserves.