The Blame Game: Why the Businessman Has Always Beaten the Economist 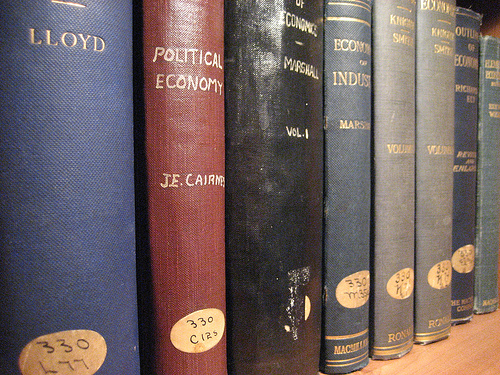 “If economists could manage to get themselves thought of as humble, competent people on a level with dentists, that would be splendid”, wrote John Maynard Keynes in 1931. Indeed today (four recessions later), little has changed: conventional business wisdom will pronounce the economist an untrustworthy academician, who has neither place nor understanding in the world outside the bubble-wrapped walls of a university – or, if he’s lucky, Parliament. The economist is blamed for the many problems of modern enterprise: job losses, poor sales, trade protection, immigration, taxes, interest rates in banks, bankers in banks, and, when it comes to it, recession. To what do economists owe this unfortunate alienation of the business world? The answer: primarily miscommunication, along with academic ego and the steep occupational hazard of broad decision-making.

The non-fiction shelves of local bookshops are littered with what Nobel Laureate Paul Krugman calls “Pop-Internationalism”. In the business world phrases like “we need to boost competitiveness”, “free trade is damaging for the economy”, and “the immigrants are taking our jobs” are a sign of miscommunication between economists and the media. Suited men and women on their daily commute clutch books filled with these assertions, in the belief that they are learning about international economics. It is, as Krugman points out, the fault of economists. These bestsellers indicate that the business world wants to know about economic issues, but all that is easily accessible is the guaranteed sell – i.e. dogmatic resistance to economic facts which are oh-so-inconvenient for the average businessman. The reality is that there are perfectly valid economic reasons why such statements are refuted. For example, the economist can and must explain in layman’s terms why the government does not close off trade with countries that undercut with lower trade prices (which results in widespread unemployment), what should be done instead, and why on earth this is good for the economy. Inability to bridge this gap is why the economist dooms himself to the blame game.

The economist and the businessman, often confused as one, are distinct entities. The economist must take upon himself the task of aligning the viewpoints of the firm, the government and the consumer, on an individual and aggregate level. The businessman seeks only to care for his business: cut costs and boost profit, productivity, and competitiveness. Employing a simple analogy to chess, it appears the firm is merely a pawn in the economist’s play against fiscal and monetary imbalance. Yet all the strategic solutions are never clearly revealed to the sacrificial pawn – only published in the American Economic Review and The Economic Journal – and moreover the economist faces checkmate at all fronts, not even beating the recession and downturns. Still, the tournament never ends. For anyone other than academics who do manage to paw through an economic journal, it is uninvitingly tedious at best and incomprehensible at worst. Even to a finalist Economics undergraduate, reading economic journals is no fun. For the non-economist, after a fairly unpretentious abstract and introduction, mathematical equations will invariably grow into a chokehold of quantitative complexity. (And unfortunately if there is an absence of uninviting equation-activity, the journal cannot possibly be a very prominent, scholarly one!) Inaccessibility and over-complication of economic policy change is why the economist cannot complain when given the blame for all that goes wrong in the business world. The gap between economists and the real world is broadening; in the words of Galbraith, “Economics is extremely useful as a form of employment for economists.”

Economics has been made to be a mathematical subject. It was not always: Adam Smith’s The Wealth of Nations, which is said to have birthed the subject, is a remarkably accessible read based on real data. But since the days of Walras, Jevons, Edgeworth, and more recently Paul Samuelson, the subject has become the victim of tautological systematisation, a theory of assumptions, proofs, and disproofs. This has become a cause for concern over the years. The economist and Nobel Laureate Friedrich Hayek contended the use of mathematical formalisation to account for and replace lack of real information by economic agents. Milton Friedman, another Nobel Laureate economist, declared “All assumptions are unrealistic”, and considered the match between assumption and reality pointless if actual data told another story. Keynes wrote in his magnum opus, The General Theory, that “too large a proportion of recent mathematical economics are merely concoctions, as imprecise as the initial assumptions they rest on, which allow the author to lose sight of the complexities and interdependencies of the real world in a maze of pretentious and unhelpful symbols.”

To some extent, this mathematical inaccessibility stems from the age-old academic battle between the Arts and the Sciences. The prohibitively simplistic idea that scientific techniques produce accurate and reliable results which can be trusted (while non-mathematical techniques of analysis are inaccurate) appears to have been applied to the subject of economics. The economic historian Robert Heilbroner stated, “There is a strong feeling that this is a data-laden science and a data-laden undertaking, which, by virtue of the sheer numerics, the sheer equations, and the sheer look of a journal page, bears a certain resemblance to science . . . But resembling a science is different from being a science.”

From this perspective, academic rivalry appears to have disguised a complex, inexact subject as something precise and entirely implementable in policy. The fact that economics is inexact cannot be contested: models are based on simplistic assumptions which are supposed to represent complex relationships between individuals, households, firms, industries, and governments. This is never denied by economists, but they take care to shroud simple and simplifying arguments in complicated mathematics, which make research appear quantifiable and therefore “precise” – before highlighting cracks within the argument. This lack of openness by excessive algebra, and the tendency for research itself to be tricky (and expensive) to access, does the economist no favours in the business world. Indeed, after making an argument seem more precise, empirical failure of it will inevitably increase the blame culture.

The problem of the economist is a multifaceted one. To succeed in the academic world and be heard at all, the economist must do the following: 1) use the complex mathematical language of equations and calculus to create a model, 2) prove it with intricate econometric analysis, and 3) publish in scholarly journals – generally inaccessible to the ordinary enquiring businessman. In light of this, I believe that to succeed in gaining the businessman’s approval, the economist’s argument should be in simple terms, explaining why it will eventually benefit the businessman – or at the very least the economy! It is easy, at this stage, to point fingers at the economists, and solely blame them for problems, like unemployment, inflation, high interest rates, or even recession, which are affected by many factors. Whether they are truly responsible or not, I believe boils down to individual policy outcomes. Nevertheless, the economist can hardly be surprised to find himself perpetually playing the blame game… and losing horribly.