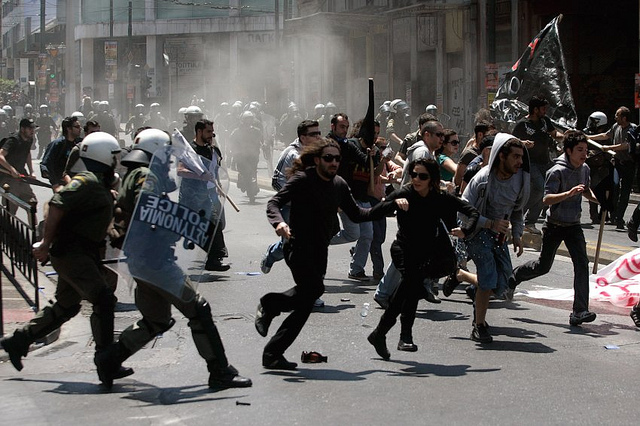 Greece: A country on the run

For the umpteenth time, Eurozone leaders have come to a grand summit to flog a dead horse. That horse is called expansionary austerity. This is the horse that says that if you cut back, you can grow. You could cast your mind to a plant – they occasionally need pruning so that they can grow into something more pretty, more organised. More specifically, expansionary austerity is the idea that governments can inspire business confidence by matching their expenditure to their revenues, i.e. eliminating their deficits. The idea runs a bit like this: governments have expenditure (on things like defence, health care, schooling, etc.) and they have revenues (or the money they raise from taxation). If there’s more expenditure than revenue, then the government has a deficit that it has to finance one way or another. The principal means of doing this is borrowing from individuals, companies or other governments. When the government does borrow, it has to pay the money back after a fixed period – depending on the country, this varies from a few months to a decade or so – and it does so at interest. The rate of interest is obviously what it costs to borrow the money. This is the bill that eventually falls on the taxpayer, who has to pay more in tax. By eliminating the deficit, it is argued, we can entice entrepreneurs with the prospect of taxes being lower in the future – which means greater profits. The prospect of this makes them flood into your economy and create more jobs for everyone, turning the tide of recession. This is rather sanitary – like a lot of economic theory, it sounds like two taps are being operated: one goes off as the other goes on. Would that it were thus!

What austere governments are relying on is the latter effect (where Dragons’ Den types flood the country) overpowers the first (of cutting government expenditure). Now, we can take a little step back to talk about Greece. As mentioned above, deficits create debt. Standard economic orthodoxy says that you service debts better in good times so the stock goes down (your revenues are matching or exceeding your expenditure). This has not happened to Greece, as during the ‘boom years’ leading up to the financial crisis they ran a deficit anyway. In fact, it got bigger during those years as they embarked on various social programmes. Of course, in the good times, you don’t notice these things as much. This was because the Greek economy was growing and therefore seen as quite capable of servicing its debts. Then the crisis hit, and it hit Greece rather hard. Governments famously agreed to take on a good deal of debt in order to save the banking system from collapse. Then investors got quite worried about Greece, in a way that you would worry about a man just made redundant taking out a second mortgage. They started to question whether or not Greece would be able to pay the debts it had, let alone the debt it was acquiring. They collectively started to worry about all of the PIIGS countries (Portugal, Ireland, Italy, Greece and Spain), by the by. Now, in the same way as car insurance companies charge more to younger drivers because they are a bigger risk, these investors started to charge a higher premium on the money they lent to Greece.

There is a magic point, of about 8%, that is the tipping point. This is the point when a country cannot afford the loans being offered. Duly, we refreshed the BBC news website as it counted upward: the yield (that’s what lenders can call interest) on Greek bonds goes up to 6%… 6.5%… 7%… Then it came, as we knew it would. That’s when Greece had to go cap in hand to the EU (read: Germany) and the IMF for a little help. The German taxpayers were outraged at having to bail out Greece straight after bailing out the banks. After all of their fiscal responsibility, their abstinence, they were not rewarded. So, politicians, sensitive to the sensibilities of their electorates, demanded that Greece be dragged through the streets and whipped before any of their money was handed over. The whipping was quite severe and forced Greece to cut back very far and very quickly so that it would presumably think twice before borrowing another Euro. Economic flagellation aside, we need to understand what the IMF and the EU actually imposed on Greece. Germany understandably demands fiscal responsibility so that Greece doesn’t start pretending not to be in when it comes knocking. Except that what it has actually done is crippled Greece for not running fast enough. Note that expansionary austerity only works if the amount the government cuts by is offset by entrepreneurs flooding into the country. What we have seen is a cycle that is depressingly predictable.

Investors worry about Greece’s ability to service its debts. They increase the interest rate, making it such that Greece cannot reasonably service its debt. They crawl to the IMF and Germany, who demand a sacrifice to the gods of the markets to appease them. The investors are momentarily fooled by the announcements that, finally, the Greek problem will go away and it all stays calm for a few days. Then it turns out that the extent of the cuts in Greece mean that people are being laid off, which reduces tax revenue. The deficit widens. Investors worry about Greece’s ability to service its debts. The cycle repeats, with each successive announcement more self-flagellating than the last.

It comes with interesting twists, sometimes. Sometimes, the EU seems to shoot itself in the foot. It promises that all will be fine, then the European Central Bank refuses to buy any more Greek debt – in other words, Europeans themselves don’t believe what they’re saying. Investors then, understandably, don’t buy into it. Back to square one and cue the next conference, where Merkozy does all it can to tell everyone that it will all be fine. This time, honestly, we’ll do what’s necessary. A bailout of epic proportions, dwarfing the one we promised before, will fix the problem. Of course, the European governments have heard it all before and nobody wants to be the one who effectively agrees to underwrite Greece because that would upset their electorates (who are upset with their own expansionary austerity experiments). So they all stand off against each other, watering it down until the medicine is palatable for their citizens. Of course, one cannot simultaneously please gods and men. They try to do both, and do neither.

So now it is not only history we are doomed to repeat, but yesterday too.