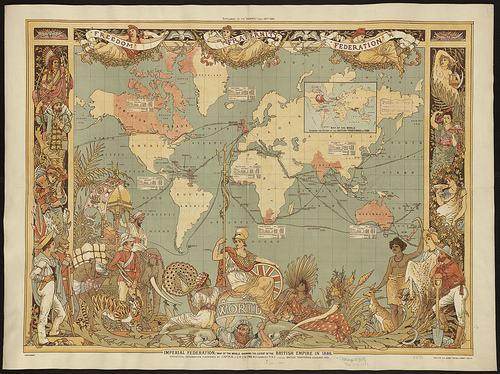 Imperialism, in a broad sense, is the extension of national economic and political power by territorial means or otherwise. It brings to mind a by-gone era of empire, naval fleets, and gold quests; this certainly characterises imperialism in its traditional, colonial sense, but it is an example of imperialism that overshadows and detracts from the economic study of modern imperialism today.

The study of imperialism has long been passed from one social scientist to the next: the economist pawns it off as historical occurrence, the historian points to the politician, and the politician swiftly and adeptly dumps the burden at the door of the sociologist, anthropologist or philosopher. There, undoubtedly, emerges the lukewarm ethical debate, and often the word is carelessly flung around in a nationalist versus sanctimonious moralist contest, over a pint at the pub. And that appears to be the extent of our interest in imperialism today. Imperialism is undoubtedly a phenomenon of collective social sciences, but in Economics we do it an injustice. The subject has been reduced to the backdrop of novels, period dramas, and Disney films – and of course, here imperialism is interpreted only as colonialism. But even the sight of a heavily made-up Johnny Depp as the endearing pirate villain of the East India Trading Co. has been insufficient to rekindle academic interest in the economic analysis of imperialism. It is an injustice that modern economists feel a certain stigma attached to the study of imperialism, because it is much more than merely Victorian colonialism; it is the policy of extending economic and political rule over other nations. Its analysis pertains to current issues like multinational banking powerhouses, the nuclear arms debate, international environmental agreements, trade wars, and arguably, the invasions of Iraq and Afghanistan. The following explores why the academic neglect of the economics of imperialism is deeply anchored in lack of definition, ideological antipathy, and to some extent, denial.

Defining imperialism neutrally has been a major issue due to the moral and socio-cultural baggage associated with the word. As the economic historian Tom Kemp argues, the word can be claimed pejorative, rather not a scientific concept but “a radical slogan which stands in the way of objectivity”. A similar outcome has befallen oft-flung words in social science, such as “capitalism”, “class” and “exploitation”, to the extent that we can no longer precisely define them and do them justice. The study of imperialism is rife with misunderstanding and useless polemics, which has begun to dominate its study and distanced those interested; the most we can hope for is that economists who use the term are aware of the various insinuations and implications, and thus define it in context. Interestingly, even Karl Marx did not directly use the term. But he, along with the other main proponents of imperialism theory (Hobson, Luxemburg, Lenin, and Schumpeter) use imperialism to describe particular economic developments in advanced nations and their significance in opening up less developed nations for trade and investment. Each had been writing at a time when this definition of imperialism was in full colonial swing; today, these principles might be applied to an equally wide and controversial context. Nevertheless, the hazy, non-neutral, and non-scientific means of defining imperialism has no doubt played an extensive part in its relative neglect in economics.

Ideological associations have long plagued the study of imperialism amongst modern economists. Imperialism, due to its undeniable affiliation with Marxist economics and heterodoxy, has alienated proponents of the neoclassical doctrines. Marx himself did not write a theory of imperialism per se, though many of his ideas lent themselves to the so-called “Hobson–Lenin thesis” – that imperialism is an outgrowth of capital. “The Economic Taproot of Imperialism” was the title of an infamous chapter in Imperialism: A Study (1902), by the British “social-liberal” economist J. A. Hobson. Hobson was considered a heterodox economist (or in his words, an “economic heretic”) after the 1889 publication of The Physiology of Industry with businessman A. F. Mummery, in which they famously refuted the classically fundamental Say’s Law (that the economy is self-regulating) by arguing the existence of underconsumption. This became a key building block in Hobson’s 1902 argument that imperialism persisted as the only means of gaining adequate returns on excess capital from underconsumption. Imperialism: A Study became one of the only real attempts at dealing with the subject from a democratic stance; radical though he was in his anti-imperialism, Hobson was certainly not a Marxist, but a staunch upholder of free trade like his classical predecessor John Stuart Mill. Yet the undoubted parallels between Hobson’s analysis of the economic motivations of imperialism and some false underconsumptionist interpretations of Marx by neo-Marxists, led to the extensive use of Hobson’s 1902 theory by the Bolshevik neo-Marxist Lenin in his pamphlet, Imperialism: The Highest Stage of Capitalism (1916). The only other non-Marxist attempt to tackle the issue was in an essay by the Austrian economist Schumpeter – whose interpretation shared much in its intellectual background with Lenin’s, though his stance was mostly a political and historical one.

Naturally, in using Hobson’s already-heretical name, Lenin’s publication created a typecast for imperialism analysts. This was only reiterated as neo-Marxist literature on imperialism and political economy swarmed early 20th century textbooks in Russia. For example, Lapidus and Ostrovityanov used a propaganda-style approach to propound Stalinist Marxism and the views of Bukharin and Rosa Luxemburg; A. Leontief’s 1935 textbook advanced Communist–Marxist theories of imperialism to the point where, as Kemp argues, traditional Marxism was “reduced to an orthodox catechism”. Soviet interpretations of imperialism dominated the academic scene, and between the Cold War and the Soviet collapse there was very little ideological desire for neoclassically trained economists to delve into the economics of imperialism. Returning to Hobson meant revisiting his heretic denial of the conventional consumption theory – which, until John Maynard Keynes revolutionised economic thinking with his highly mathematical theory of aggregate demand, was tantamount to academic sacrilege. While Keynes went on to devote a sizeable portion of The General Theory to redeeming Hobson’s work on underconsumption as his predecessor, the fact remained that Hobson’s (and indeed anyone else’s) study of imperialism was tarnished with the ideological brush of Marxism.

There are then, of course, those who will cast off imperialism as academic deadweight. Is imperialism dead? Its economic motivations are so rarely discussed, that one might assume so. And yet, between the ethical fuzz surrounding the definition of imperialism and the seemingly instant recoil at considering anything “Marxist” as more than intellectual curiosity, one can’t help but wonder whether the stigma associated with imperialism is deepened by mortification and thus, denial. After all, the costs of imperialism are felt even today – for example, empires created the slave trade and opium trade for their own benefit, which substantially hindered growth in developing nations. Today, backdoor imperialism is not dead; it is merely rechristened as “international relations”. It holds the same economic motivations as any colonial voyage. Notably, almost all who analysed the economics of imperialism took a welfare stance, and argued against imperialistic policy on all occasions. It is then tempting to consider the possibility that heterodox and Marxist economists, having already fallen out of favour with mainstream classical economics, had little to lose academically by dealing with the unaddressed truth. Indeed, for the Marxists and neo-Marxists, pointing out gaps and failings of classical economics was a potent weapon against capitalism.

It is a hope then, for a renaissance in the economic analysis of imperialism. One in which neutrality is key, so as to evade the occupational hazard of ill-formed definitions in social science, and where the academic claim is regarded as ideologically legitimate. Galleons and gold notwithstanding, it is shame to neglect such an area of study, which has contributed so much to the world economy.