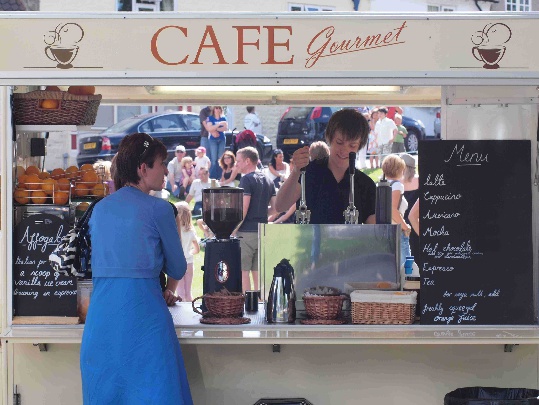 In Market Square in the heart of Durham, just opposite Boots, lies Café Gourmet. It’s easy to miss – a little trailer that blends in easily amongst the other market stalls. The difference, however, is that this one is run by a Durham student, Pete Southern, who spends every Saturday running his business serving coffee to the local residents.

Considering typical Durham weather, and the fact that I could barely endure the icy temperatures for the duration of the interview, this man demonstrates an admirable sense of commitment. Every Saturday the dedicated Collingwood student sets up at 8 in the morning, while most of us are still in bed recovering from the night before, and works until 4 in the afternoon, serving coffee, tea, hot chocolate and various complementary snacks. He doesn’t complain though: chilly winds aside, he likes the buzz of the marketplace, the people he meets, and above all, making coffee.

Competing with the multitude of big coffee chains and independent cafés in Durham (how such a small city needs so much caffeine is beyond me) can’t be easy, but a small chalkboard propped up on the trailer professes to offer customers something none of the others can – the “best in Durham guaranteed”. How can he possibly make such a bold statement?

“I’ll give people their money back if they don’t agree it’s the best in Durham – if you can tell me where I can find better coffee, just let me know.” He cites the influence of a businessman who once told him that “customers need a guarantee to know they’re getting the best”. Pete explains that he only uses coffee beans of the highest quality (“the producers spent 18 months perfecting the blend”), a professional coffee machine worth £4,000 (“you get what you pay for”), and Cravendale milk. “The protein content and hormone levels of milk vary through the year. Cravendale’s taken from many sources, so it’s stable throughout the year.”

He clearly knows his coffee. During his gap year in Australia, Pete spent 60 hours a week training as a barista in Melbourne, one of the world’s best cities for coffee. “You can’t get a bad cup of coffee out there. They’re not like English customers who just put up with it. If it’s not quite right, people will complain.” Big chains like Starbucks only survive thanks to tourists, who gravitate towards the familiar brand name. Locals refuse to take anything but the best. On his return home, Pete was shocked at the standard of coffee in Britain, and spotted a gap in the market.

Throughout our chat, Pete gets plenty of customers shuffling up to the trailer evidently in need of a warm beverage. Some are other market traders who know him well; some are familiar faces who keep coming back for more (“very few places do nice espresso”, according to one of the regulars); and others are brand new customers trying Pete’s coffee for the first time. Pete is keen to make sure they’re satisfied, offering a full refund if they disagree with his “best in Durham” claim. He is yet to find an unhappy customer.

Self-assured rather than cocky, Pete clearly isn’t the type to shy away from a challenge. After a year studying engineering, he decided to take a year out pursuing his new business venture and working in procurement for his brother’s company. He has a place on a business course at Queen’s Campus next year, should he decide to return to study. However, having experienced the practical side of business, he has reservations about how much he could gain from a degree. “You get a lot more from learning on the job, without necessarily having to be good at academia. When it comes to entrepreneurship, you can learn all the theory but you only find out what works and what doesn’t from actually doing it in the real world.”

Entrepreneurship seems to run in the family. His granddad was a successful entrepreneur and passed on his wisdom to the grandkids. “His philosophy was you make your own luck. If you see an opportunity, take a punt and hope it works out. It doesn’t always, but if it was a guaranteed success, then everyone would be doing it.” It seems like the risk paid off for Pete’s brother: after dropping out of Newcastle University he has since found success in setting up his own firm doing research and development for life sciences, which Pete now works for during the week as a buyer. It was thanks to his brother, in fact, that Pete was able to borrow enough money to obtain the Café Gourmet trailer at an auction. Now he hopes that he can follow in his family’s footsteps and become an entrepreneurial success in his own right.

Becoming an entrepreneur has always been Pete’s ambition. He showed creative promise even at school when he won the Young Engineer for Yorkshire and Humberside competition with his GCSE D&T project in 2006. However, it wasn’t until Pete took part in Ideators (“like a Sri Lankan version of The Apprentice“) that he was really inspired to pursue his dream. Last summer, he flew out to Sri Lanka as Durham University’s representative to compete against other students from both British and Sri Lankan universities in the enterprise competition. The contestants were given challenges, such as setting up a window washing business in a day and making as much money as possible. “The challenges were crazy – but it showed me that with a bit of confidence and persistence, you can do pretty much anything.”

Since setting up his coffee business, it hasn’t all been a smooth ride. “In the first few weeks, I had barely any customers because it was too expensive. It was a bit of trial and error with the prices; you just have to see what works. Marketing’s really important too – you have to make sure things are on show, like the big coffee machine so people know what they’re getting.” Judging from the popularity of his coffee from the one afternoon I spent there, everything seems to be going well for him now. Where does he plan to go from here? “I’m looking to expand as soon as possible. I tried to get permission from Yum to set up at the Science Site, but they seemed reluctant to allow any competing business. Now I’m thinking about doing survivors’ breakfasts after college events, and maybe weddings too, as well as summer events and shows. Plus, I’ve recently converted to batteries, instead of the noisy generator I used, and soon they will be charged by a solar panel on the roof. The business seems like it’s on the verge of the hill about to snowball.”

Entrepreneurship isn’t easy, but it looks like taking a risk with Café Gourmet has paid off for Pete. So what’s his advice for budding entrepreneurs of the student world? “There’s always space for more entrepreneurs! For people considering starting their own business, I would say by all means think things through but don’t overthink it. The best way is to just get on and do it. Once I started, it all just came to me. It gets easier once you start, and you never know how things will work out until you try it yourself.”

Considering starting a business? Entrepreneurs Durham can provide assistance to students or recent graduates who have started or are in the process of starting a business. It’s free to join so check out their website for more information.