End of the road for the High Street? 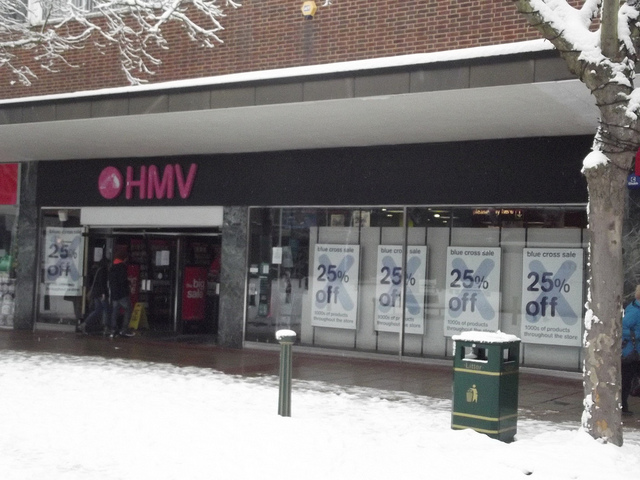 Is the demise of HMV a sign of a wider trend?

In a world where the Internet is becoming the main portal for consumer shopping, will any room be left for the traditional hustle and bustle that once encapsulated the UK High Street? The recent administration of retail giants HMV, Blockbuster, and Jessops has led to the questioning of the commercial viability of the traditional High Street names. Online shopping or ‘E-commerce’ is one of the fastest growing global markets and in conjunction with the economic downturn, is somewhat eclipsing traditional methods of shopping. Is the liquidation of traditional retail firms symptomatic of the collapse of the High Street?

The Centre for Retail Research illustrates that the UK has the biggest online share of retail business in Europe. The year 2011 saw total online sales surpass the £50 billion mark, accounting for twelve percent of total retail trade. This is an astonishing increase from just under nine percent in 2008. But a further year has passed, and 2012 foresaw growth of a similar magnitude, but a number of casualties of traditional High Street names following sharp downfalls in profitability. The demise of the local shopping environment is an overwhelmingly dismal prospect. What is a local town deprived of a central hub of commerce? It really is tragic.

How exactly has this swift growth in E-commerce had such a sizeable impact, as to warrant the death of the High Street? One explanation lies within the failure of a number of firms to fully embrace and appreciate the significance of E-commerce. This stumbling block has allowed the more innovative retail corporations to gain a comparative advantage, and outpace competitors in internet sales. Many retail giants failed to generate a well-established online user experience. The average consumer is more likely to buy products on a site that is easily accessible, perhaps including inventive features such as product zoom, 360-degree views and catwalk videos. Easy access to other user reviews is another indispensable trait of online shopping, and certainly somewhat contributes to the success of retail titans Ebay and Amazon. In fact, sixty percent of the population routinely use the Internet to obtain goods. It seems that the remaining standing firms have to learn to compete, or accept defeat.

Of course, there are further complications; including the issue of value for money – this concept no doubt drives the real retail destinations of the majority of consumers. As a young teenager in an Easons’ bookshop, I recall looking to complete the rest of my much-loved Alex Rider series. Yet the higher in-store prices resulted in resorting to online browsing, which is no doubt a familiar story for many. Admittedly, I haven’t purchased a book from anywhere other than Amazon ever since. Are we all culpable in this High Street calamity? The comparisons between online and in-store prices are often astounding. In fact, shop in a high end clothes store and expect to pay premium prices, but shop through an online re-seller and it seems that discounted bills and price comparisons are commonplace.

This undoubtedly leaves the retail giants with an impending dilemma. If high street chains do not adapt swiftly to current consumer spending behaviours they will become obsolete shells, leaving our cities and towns lacking in any kind of vibrancy. There are a number of actions that have been proposed to combat the death of the High Street, as recently discussed on the panel series by the Guardian. In order to survive, the High Street must reverse the trend of creating large areas of ‘monofunctional’ retail spaces, initially built to fight of the threat of out of town retail parks. This only produced high rent premises that immediately became occupied by the giants- a situation that now cannot be maintained as a result of this the high street online competition. As suggested by Chris Baguely of Bridging Finance Limited, “The high street of the future will still be a focal point for the community but it will (need to have) have a different emphasis”. The High Street must transform its spatial importance to a centre of social interaction, shifting emphasis to bars, restaurants and cafes; providing niche services that even the complex abilities of the World Wide Web cannot replicate. This is necessary to re-establish the High Street as a flourishing centre of trade and business. But for now, it appears that solitary streets are the inevitable future, and until it transforms, the High Street will continue to crumble.