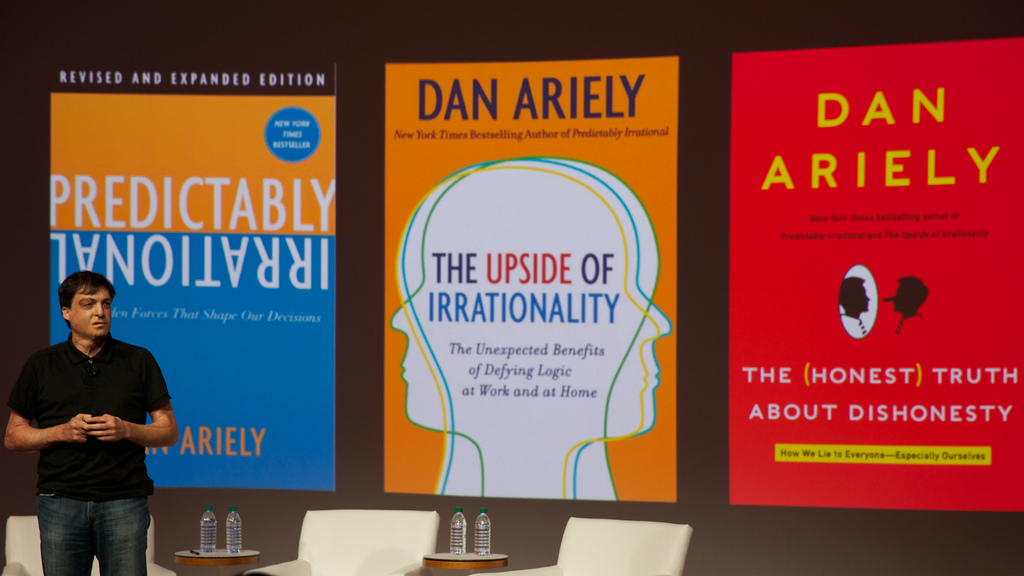 Ariely has written extensively in the area of behavioural economics

Learning economics, one of the first things we are taught is to assume that individuals are rational. We will always act in our best interests and will maximize our utility given a certain level of income. Seems quite reasonable, right? Why would we intentionally do anything that isn’t the best for us?

Behavioural economics is an emerging new branch of economics that is ‘a method of economic analysis that applies psychological insights into human behaviour to explain economic decision-making’. According to some research, behavioural economists have argued that in reality humans are far from rational beings. Human intuition often manages to fool us in a predictable, repeatable and consistent manner. Because of this, we are often unable to see reality for what it actually is and see it as our sights and emotions make us see it.

Take optical illusions as an example, we know that our eyes are fooling us but that doesn’t stop us from being fooled! The economic environment is much like a maze of illusions (of course not as obvious as optical illusions) and we are often mistaken in our understanding of this environment. This confuses us into making irrational decisions. This happens so often, that we can be called predictable due to the consistent manner of our irrational nature. Think of these illusions as a metaphor, visualization is one of our primary senses and its something we base so much else on. If our visions can fool us, something we have been doing since birth and know that we are good at, chances are high that we might make even more mistakes at something we are not good at like making financial decisions. We are not specialized in making such decisions and we do not make such decisions frequently enough to be good at it. What’s worse is that it is not at all easy to know when one has made a mistake with regard to financial decision making. Cognitive illusions are much harder to explain and understand when compared to visual illusions.

Here is another example to explain cognitive illusions: my friend bought a shirt online from H&M – once. A year ago. Every month he receives ‘special offers’ and discounts and updates and receives the catalogue and receives emails from the store. Everyone has experienced this, whenever you buy something online you are asked to check the box if you want to receive news and updates about offers from the store. Most people (proven through research) do not check the box. But companies have become smarter. Now they say, check the box if you do not want to receive any information. In this case as well, people do not check the box, maybe out of habit or perhaps because they’re in a rush. The consequence? We have started receiving a whole lot of junk!

Of course this great deception can also be seen in a positive way. Take organ donation, for example. According to a research paper, it is highest in countries such as Austria, Belgium, France and Poland (being about 99–100%). On the other hand donations are lowest in Denmark, UK and Germany (between 4–12%). Netherlands is a strange case as they were able to increase organ donations by mailing every household and begging them to donate organs. Why were there such drastic results? It was the same idea: in countries with higher organ donation rates, people were asked to check the box if they did not want to donate their organs.

In this case, more people chose to be a donor because of a simple ‘designed behaviour’ technique. What does this imply? The person who was in charge of making such forms is greatly influencing our behaviour. This means that the environment we are in greatly changes how we react. Take an everyday example, Anne goes to Tesco’s: “Ah! 3 for 2 on Pasta sauces! That’s amazing! If it costs £2.50 per pasta sauce, I can now get 3 for 5 pounds! That’s a great deal!” Anne says. Wrong. Buying the 3 pasta sauces is only a rational decision if Anne needs those 3 pasta sauces and if she was planning on buying and using them. In truth, Anne just wanted one pasta sauce because she doesn’t even cook pasta that much. But because of the deal, she got excited and emotional at the feeling of having bought 3 and paying only for 2 so really she thinks she got one free! What Anne doesn’t realize is that in reality, she has paid £2.50 more for something she didn’t want in the first place. Later, after the initial exultation at having ‘saved’ Anne realized that the pasta sauces expire very soon and she can’t possibly eat all that pasta because she doesn’t really want to. But forces herself because “it was a great deal” and makes herself a little unhappier eating what she doesn’t want. Too much of a good decreases our utility. But we do this all the time! The power of 0 and the sheer idea of something being free makes us turn into irrational beings who will ditch well thought out plans which were better decisions.

Maybe you’re thinking of going on a holiday but can’t decide between Athens and New York. Huge differences: different cultures, different food and different people. Athens looks good but you’re leaning towards New York. But then you see that the holiday package for Athens offers a free breakfast. All of a sudden, you know. You’re going to Athens. Because a free breakfast is a lot better than one you have to pay for! New York becomes the inferior option in comparison. In truth, we do not know what our preferences are. We are thus susceptible to influences from external forces. All we do to figure it out is compare our options. If one looks better in comparison to the other, that’s the one we will go for.

Most of the above examples are based on experiments and research by behavioural economist Dan Ariely. More can be read about Dan Ariely’s work in his best-selling books and articles.