Who are you?-The Farewell Review

Scene from The Farewell (Copyright by production studio and/or distributor. Intended for editorial use only. https://www.moviestillsdb.com/movies/the-farewell-i8637428?sort=popularity#uTuc3o)

Recently, a new generation of young Asian-American filmmakers has started to tell their stories. First, it was Pixar’s heartfelt short film, Bao, then Jon M. Chu’s adaptation of Kevin Kwan’s novel, Crazy Rich Asians. In 2019, it was Lulu Wang’s turn who made a film about identity which is rich with complex themes and excellent performances and manages to strike a perfect balance between comedy and drama.

The Farewell, based on Wang’s real-life experiences, tells the story of Billi, a Chinese-American New Yorker. After her grandmother is diagnosed with cancer, the family choose not to tell the matriarch the bad news and stage a wedding as an excuse to spend time with her before she dies. 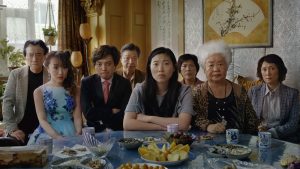 The Family in The Farewell (Copyright by production studio and/or distributor. Intended for editorial use only. https://www.moviestillsdb.com/movies/the-farewell-i8637428/uB65Gw) Courtesy of Sundance Institute.’

Billi is played by Awkwafina, an actress largely known for her comedic roles. She excels, delivering a complex performance of a woman who is seeking to find her identity while having to restrain most of her emotions through the vast majority of the film. Her co-stars impress too, particularly Shuzhen Zhao as Billi’s grandmother and Diana Lin as Billi’s mum. 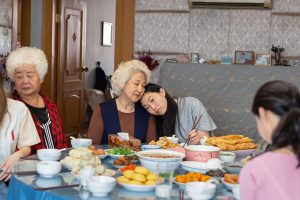 Awkwafina and Shuzhen Zhao in The Farewell (Copyright by production studio and/or distributor. Intended for editorial use only. https://www.moviestillsdb.com/movies/the-farewell-i8637428/uB65Gw)

The Farewell’s central theme is identity. It is not just losing her grandmother that Billi fears. She feels that by losing Nai Nai, part of her Chinese identity will fade away with her. Despite Billi’s affection for her heritage, it is clear that her identity is dual. Initially, she struggles with understanding why her family do not want to tell Nai Nai her diagnosis and also with some aspects of Chinese society that feel alien to her. The script has a clever way of signalling the point when she finally understands and makes peace with all this, but the film’s finest moment, thanks to Lulu Wang’s honest dialogue and the cast’s perfect delivery of it, is perhaps when Billi finally confronts her mother about how she experienced moving to the United States. The repressed emotions throughout the story make this climax even more powerful.

Wang’s direction is equal to her writing. Shooting the film both in English and Mandarin provides a great deal of authenticity and reflects Billi’s dual identity in an easily understandable manner. When filming the family interact, the most important element on the screen is often hidden in the corner of the frame, be it Billi’s mother fighting tears or she herself having a breakdown, mirroring how the members of the family are trying to hide their emotions from each other. 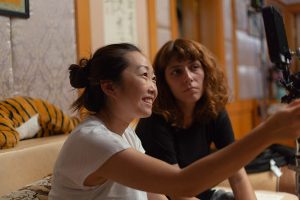 Lulu Wang on the set of The Farewell (https://www.moviestillsdb.com/movies/the-farewell-i8637428/7sN2NB, Copyright by production studio and/or distributor. Intended for editorial use only.)

The film is also exceptional at portraying the challenges and coping mechanisms of first- and second-generation immigrants. While her parents are consciously trying to integrate to American society (the father at some point even calls himself American), Billi is actively and proudly trying to seek and perform her own authentic Chinese heritage, despite the fact that she finds some of its aspects particularly difficult.

In an interview, Lulu Wang said most studios did not want to fund the project because it was not an American story. They could not have been more wrong. The story of The Farewell is the story of all Americans; navigating one’s immigrant heritage with the values of a different world. It is a film about a young woman in search of her own identity, which with its clear writing, honest story, and outstanding performances, is guaranteed to move all first-, and second-generation immigrants or anyone who ever tried to find or was afraid of losing a part of who they are.