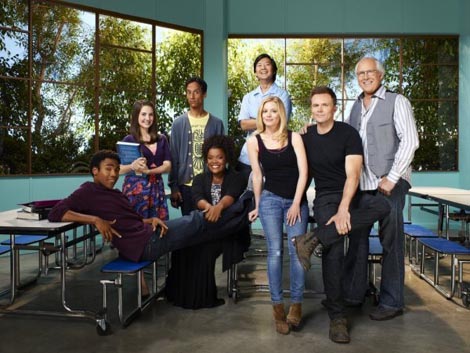 The cast of Community

As an outsider looking in, there is a certain stigma attached to most of the sitcoms produced in the US. On the whole they are deemed by the British as casually entertaining; harmless fun, but hardly original or sharply intelligent. Last year, Dan Harmon’s new comedy Community, set in a Colorado Community College started its first season on NBC. Although not an exactly flawless comedy series, some of its episodes are spectacularly original. Through this success the show has begun to slowly break down some of the negative preconceptions of American comedy.

Community focuses on an eclectic study group of six friends: the lead Jeff Winger (Joel McHale), who returned to college after his law firm found out he had faked his qualifications; Annie Edison (Mad Men’s Alison Brie), an eighteen year old model student with a past of drug addiction; Abed Nadir (Danny Pudi), a film student with emotionlessly frank way of talking; Troy Barnes (Donald Glover), an adorably naive ex-high school quarterback; Britta Perry (Gillian Jacobs), possibly the most reasonable and, she fears, the least fun member of the group (“Knock Knock. Who’s there? Cancer. Oh good, come on in, I thought it was Britta!”); Shirley Bennett (Yvette Nicole Brown), a Christian mother of two; and Pierce Hawthorne (Chevy Chase), a horrendously politically incorrect and lonely man who tries to attach himself to Jeff. The ensemble is what makes a sitcom work, and Community has in its cast a group that shouldn’t work, but undeniably does. The relationships that develop between them all allow for great variety within different episodes, as subplots can easily focus on different groups or pairings without feeling jarred or contrived.

A typical episode is full of pop culture references, usually verbally attributed to the group’s own Abed. As an aspiring film director, he is the king of pop culture and lives his life through a lens, self-confessing that he has lived “a lifetime of observation, mostly,” constantly seeing behavioural patterns in relation to depictions on television and film. In “Debate 109” this aspect of his character is magnified when his student film project begins to unknowingly “predict” what will happen to the rest of the group, right down to hitting the exact dialogue. This is not, as Shirley suspects, the work of the devil, but merely the result of his observations, and how they have informed him the group would react to likely situations. Along with recreating moments from films he loves, such as the dance scene from The Breakfast Club, Abed has a penchant for explaining much of the group’s dynamic in TV sitcom terms. After the rest of their friends complain to Jeff and Britta about their constant bickering, Abed explains to them why they are “no Ross and Rachel”. Refreshingly, it is the friendships rather than any romantic attachments that make the show so good. The opening episodes have a definite leaning towards exploring the Jeff/Britta dynamic, and later on Jeff/Annie is explored too, but these relationships are both offset by possibly the fans’ favourite pairing – Troy and Abed. Perhaps the study group’s closest friends, they interact with a unique humour that is encapsulated at the end of every episode in a segment while the credits roll. Together they have done a Spanish rap, a morning TV show, dressed Troy up as a Christmas tree, and impersonated Sesame Street’s Bert and Ernie.

Through Abed the viewer is shown the various television tropes that Community either embraces or defies. In the season two opener after a season one finale that centred around a Jeff-Britta-Annie love triangle, Abed comments that he hopes “we can move away from the soap-y relationship-y stuff and into bigger, fast-paced, self-contained escapades” (which it succeeds in doing in its Halloween zombie episode “Epidemiology”). Abed also scrutinises Jeff by telling him “TV makes sense. It has logic, structure, rules. And likable leading men… We have you.” Although the writers show us through Abed that they are aware of their programme’s flaws (it sometimes falls into the same trap as Glee in constantly pointing out its problems but not doing much to resolve them), there are some shining examples of why it is a more original sitcom than most.

The most memorable and cinematic of all of Community’s episodes so far is undoubtedly “Modern Warfare” which aired two episodes before the season one finale, unfortunately leaving the final closing episodes to feel somewhat anti-climactic. The premise of the episode is what happens when the whole college partake in a game of paintball for the ultimate prize: priority registration. As Jeff explains, “you can schedule all your classes on a Monday and take a six day weekend!” before reaching for his paintball gun. The opening of the episode begins like any other, lulling the viewer into a false sense of normality until after the opening credits the scene cuts to “one hour later”. Waking up in his car after his morning nap, Jeff is confused to find a deserted and deadly silent Greendale Community College. All around him lies total paintball destruction; the sets are completely covered with litter, broken furniture, and paint. Although it must have been tremendously fun for the production team to set up, one can’t help but feel sorry for the crew members who had to restore the set to its original state after filming. With such attention being paid to all the aesthetic details of the set, the audience immediately knows they are about the watch something special. The episode parodies so many of the action-survival movies that Hollywood has churned out over the years and thus we get countless film references from The Matrix to Terminator (“Come with me if you don’t want paint on your clothes”). Once the game begins the entertainment never ceases, climaxing when Señor Chang (Ken Jeong of The Hangover fame and other Judd Apatow comedies) enters the ring with a paint bomb.

The sheer amount of meta references and nods to pop culture in Community is too much to catalogue. An attempt to do so would be an injustice to a show that is not only tremendously self-aware of itself and of its position in the landscape of past and present American comedy, but concentrated and dedicated to establishing believable and humbling representations of friendship.

Buy the DVD on Amazon: