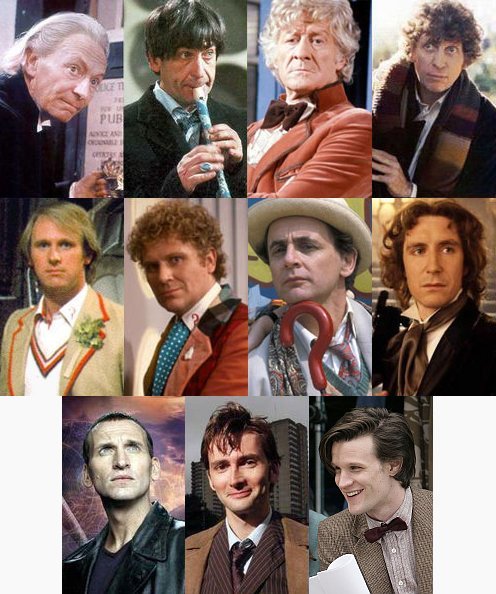 The different faces of the Doctor

There’s no way Doctor Who should work. It breaks every rule and guideline which has ever been formulated for writing a gripping story. The hero is immortal (which cuts dramatic tension at a stroke; for another example of this problem, see the Gospels), and equipped with a range of tools which turn him superhuman: his screwdriver opens every lock, his psychic paper can provide him with any credentials he needs, his spaceship travels anywhere in time and place and coincidentally translates all spoken language instantaneously. And even with this arsenal of magical equipment, he tends to resolve plot dilemmas in a rather formulaic way, in general through complex technological solutions (which often, for some reason, involve turning various objects into gigantic transmitters; even Stephen Moffat’s Christmas Day episode, which seemed to be working towards something cleverer, settled on this as a get-out). Chekhov’s “gun on the mantelpiece” law for dramatists (if you have a gun on the mantelpiece in Act 1, make sure it goes off in Act 3) works both ways; the audience ought to feel cheated when a solution is pulled on them which they couldn’t have possibly foreseen.

And yet, despite all this, Doctor Who is brilliant. It does manage to be gripping and full of tension, and although I can’t quite put my finger on why, I think it has something to do with the completely arbitrary rule that the Doctor is not allowed to solve his problems with violence. This is new to the series; it seems to have been imposed in the Russell T. Davies revamp. (The older Doctor never actually carried a gun, but he was accompanied by an incredibly irritating robot dog which doubled as a powerful laser.) Arbitrary rules in narrative have the effect of formal devices in poetry: they concentrate the writer’s energy in an unpredictable direction, which can shield the writer from excessive self-indulgence. In the older Doctor Whos, this arbitrary rule was to do with the show’s budget, and monetary constraints forced the writers and props team to be a lot more imaginative. (The same could be said for early Buffy the Vampire Slayer.) (And, while we’re on this subject, it’s no coincidence that the best alien species of the new Doctor Who – the Weeping Angels in “Blink” – must surely also have been one of the cheapest.) The non-violence rule is similarly fortuitous; it forces the writers to plan ahead, to be creative and inventive, in short to write satisfyingly. All the preponderance of gigantic transmitters shows that some writers have risen to this challenge better than others.

The other reason I’d like to suggest for Doctor Who’s popularity has to do with the figure of the Doctor himself. I suspect this operates on a fairly subliminal level, but it’s pretty obvious that the Doctor embodies the way a father appears to a small child; able to travel anywhere and fix anything, interested and fond and proud but also alien. It is no surprise that his most important piece of equipment is his screwdriver. I’m told by my own father, who remembers the show in its original incarnation, that this is genuinely how it started out: a story about a grandfather who builds a time-machine in his back garden. Subsequently that narrative has become buried, but the character has retained those contours and is stronger for them. (The identification between Doctor and Dad partially explains why the Doctor having sex with Billie Piper was such an emotional misstep for the series.) A brilliant character identified subliminally as a father, and plots kept interesting by an arbitrary non-violence policy, really shouldn’t be enough to make up for Doctor Who’s flawed conception, but in fact it works perfectly, and the next season shows every indication of being the best yet.