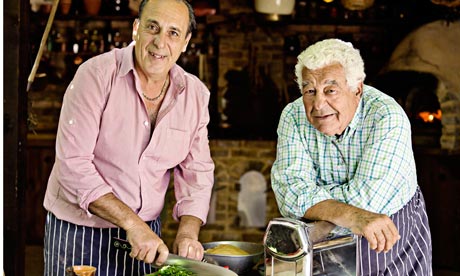 Gadding about like schoolboys, but in an entertaining way!

So there was I, minding my own business, sipping a glass of wine and pretending to revise when what should I stumble across but to . And can you believe it took a cheap snipe at my style (although liked it enough to steal my opening gag)? I was prepared to read a considered rebuttal but was surprised to find the writers agreed with me in the key respects. Just what provoked their initial ad hominem I cannot imagine. Of course, I would never stoop to such levels. Well actually I would. I had a great remark prepared involving the authors, a Masterchef host and a butternut squash, but my editor told me to cut it out on the grounds that it was both libellous and physically improbable.

Later that same evening, who should pop on the television but Antonio Carluccio (OBE) and Gennaro Contaldo ostensibly engaged in “finding the new Italy” but in fact getting slightly “snozzled” on good wine, eating beautiful food often in the company of beautiful women and napping in the Italian sunshine.

This made for excellent television. It was educational, entertaining, and transporting. Our guides were expansive and avuncular. Their depth of friendship was evident and their witty repartee engaging. Watching them was good for the soul. Like giving to charity, or following Deepak Chopra on Twitter.

But it also made me feel slightly indignant. How very dare they go on some lovely jaunt and get paid for doing so out of my licence fee! Here was I slaving like Sisyphus (I had put my wine down and changed into a bath robe – stress will get you nowhere) and there were they gadding about like schoolboys.

This reminded me of a previous BBC venture, Steve Coogan’s The Trip (incidentally, now re-cut into a film and doing the US festival circuit). What Coogan had cottoned on to, was that if he could knock up a script in which he and a friend worked their way through lovely restaurants that dotted beautiful countryside, and make it funny enough, he and said friend might just manage to get paid for working their way through lovely restaurants dotting beautiful countryside.

Carluccio might have had the same idea. If only we could have been flies on the wall at that pitch:

Carluccio, “My mate and I are going to make a documentary about the new Italy. We thought we might need a car. I was thinking a classic Alpha.”

Producer, “But of course, Antonio (OBE), whatever you wish.”

Contaldo, “And women. Pretty ones.”

Producer, “Naturally, Gennaro. You’ve still got it, you sly devil.”

So I suggest conjuring up your most sybaritic dreams, committing them to paper, dropping in some well-chosen badinage in every other scene and pitching it to the bods over at Television Centre. You’ll be onto a winner. Naturally, you will need the charisma and raw talent to pull it off. Carluccio and Contaldo supply both.

Contrast this with The Apprentice. Some of you may have already seen the two-part series opener. I haven’t. The trailer alone provoked my ire. It was just another batch of average types under the misapprehension that they were God’s gift to business. “Business is in my blood”, “Well I’m business personified”, “That’s nothing, I lactate business”, “I started my first portable radio company in utero”. Oh bugger off will you? I wonder if, by some miracle, something intelligent and vaguely well mannered has slipped through the auditioning process. Probably not. I only watched it for Margaret Mountford and now she’s gone. What a woman.

Two Greedy Italians continues on Wednesdays at 8pm on BBC 2

The Apprentice continues on Wednesdays at 9pm on BBC 1